Hate your IT job? Sick of computers? Good news: An electronics-frying Sun superflare may hit 'in next 100 years'

Bad news: Might actually be 1,000 years. And not even that devastating 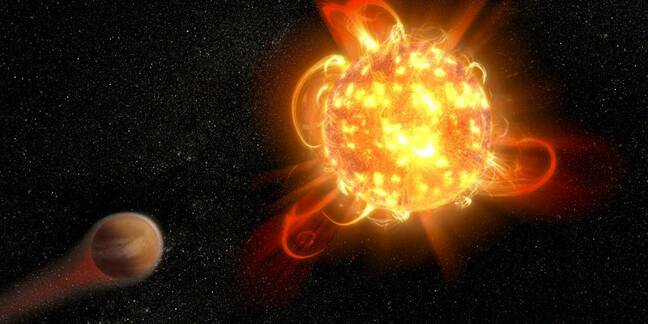 Our Sun may be middle-aged but it still has the energy to expel superflares, a rare rush of energy, every few thousands of years that could destroy Earth’s spacecraft and electronics, scientists warned.

Stars are unpredictable. They occasionally and randomly let out belches of plasma, particles, and radiation, in the form of solar flares or coronal mass ejections. Sometimes these eruptions are powerful enough – about 10,000 times more energetic than usual – to be classified as superflares.

Superflares are often seen blasting out from young sprightly stars. These junior suns rotate rapidly, spinning once every few Earth days, and release superflares that have energies up to 1036 erg. In comparison, our own Sun radiates roughly 3.9 x 1033 erg every second. (An erg is 10-7 joules.)

It was previously thought that older stars like our Sun – a healthy 4.6 billion years old – didn’t really have the power to eject superflares, however a group of eggheads led by the University of Colorado Boulder in the US this week showed this isn't the case.

The list of superflares was narrowed down to 43 main-sequence stars that are similar to our Sun, and the researchers analysed the superflare energy and the star’s properties to estimate how frequently similar stars emit these types of explosions.

They estimated that Sun-like stars that rotate slower, roughly once every 25 Earth days, eject superflares about once every 2,000 to 3,000 years with an energy no more than 5 x 1034 erg.

“Young stars have superflares once every week or so,” said Yuta Notsu, first author of a paper discussing the findings, published in The Astrophysical Journal, and a boffin working in the Laboratory for Atmospheric and Space Physics at UC Boulder. “For the Sun, it’s once every few thousand years on average.”

In the past, superflares didn’t pose too much of a problem for Earth, at least. However, if one was to erupt now it would slam a tsunami of high-energy radiation into our homeworld, possibly knackering orbiting satellites, wrecking computers and other electronic circuits on the surface, and plunging society into power cuts and darkness, he suggested.

“If a superflare occurred 1,000 years ago, it was probably no big problem," said Notsu. "People may have seen a large aurora. Now, it’s a much bigger problem because of our electronics.”

Notsu doesn't know when the next superflare is due, though, he seems certain the Sun will eject one at some point. “Our study shows that superflares are rare events. But there is some possibility that we could experience such an event in the next 100 years or so.” ®