Meet the new Dropbox: It's like the old Dropbox, but more expensive, and not everyone's thrilled

Dropbox has announced new features and partnerships with Atlassian, Slack and Zoom – but it comes after a price rise that has some users feeling hot under the collar.

The cloudy storage outfit is keen to move beyond mere cloud storage to become "a single workspace designed to bring files, fragmented work tools, and teams together".

The company has a new desktop client for Windows and Mac so that when you click the Dropbox icon you no longer get your Dropbox files shown in Windows Explorer or Mac Finder by default. Instead, you get the shiny new Dropbox app (currently in early access preview) with a Create button for starting new Microsoft Office or Google G Suite documents. 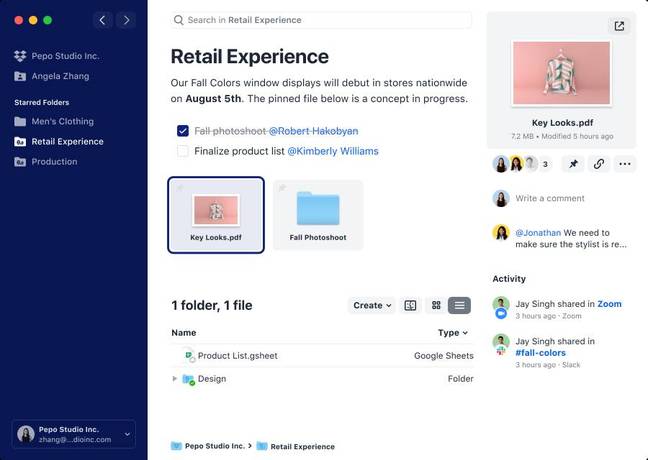 The new dropbox client app. Note the tiny amount of space left for actual lists of files (click all to enlarge)

If you edit a Microsoft Office document that is stored in Dropbox, it opens with a "badge" at the right edge, from which you can share, comment or view version history. If you create G Suite documents, they show up in that Dropbox folder. 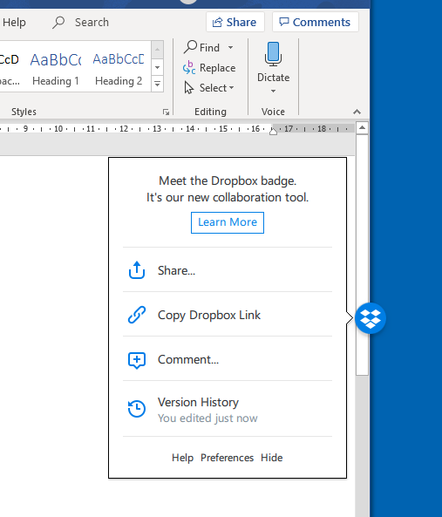 The Dropbox 'badge' that appears in Office documents

G Suite documents that you create in the app are saved in Dropbox, though edited with the normal Google tools. Although it was not working in our Early Access Windows app, it looks like editing G Suite docs and online Microsoft Office documents will be possible in an embedded browser in the app in future, to avoid switching applications.

The Dropbox client also has new collaboration features. In a shared folder, you can chat directly to other users with permissions to that folder. You can do @mentions and get notifications of document changes and comments. You can type folder notes, lists and to-dos at the top of a folder, and mark documents as important.

Slack integration lets you send Slack messages and share files to Slack channels direct from Dropbox, while integration with Zoom videoconferencing means you can join Zoom meetings from the Dropbox app.

Atlassian features are not yet announced, but we are promised "deep integrations". Atlassian's products include Jira for tracking software projects, Bitbucket for Git code repositories, Trello for planning boards, and Confluence for collaboration workspaces.

Smart Sync, another recently announced feature, lets you have Dropbox files automatically become "online only" if they are not used for a period. You can also set all files to be online only by default. An online-only document appears in the app and in the file system, but is only a pointer to an online file that downloads on demand. This can save a substantial amount of space. Smart Sync requires installation of a new driver, and only works with paid Drobox accounts.

The company has also introduced Rewind, aimed at letting you rollback an entire account if a ransomware attack encrypts your files. Rewind only works for paid accounts and keeps version history for 120 days, or 180 days for Dropbox Professional customers.

The idea, it seems, is to put Dropbox at the centre of your workflow rather than just using it as a handy place to store and sync documents. This is likely to prove intrusive for some, and fortunately you can set Dropbox to open files in Explorer or Finder via preferences – in which case you will rarely see the new app. 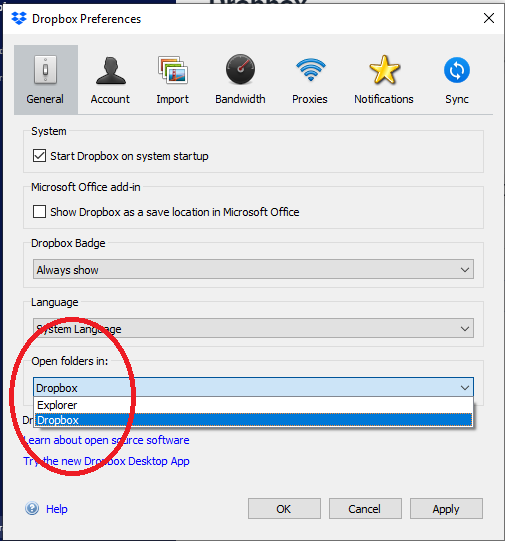 If you do not want the potentially intrusive new Dropbox client, here is where you can hide it

The Dropbox announcements follow plans unveiled a couple of weeks ago, giving paying users twice as much storage, now a minimum of 2TB (Plus plan) rising to 3TB (Professional) or 5TB for Business Standard users.

There is a downside, which is that the price has gone up by around 20 per cent for customers on the Plus plan, the cheapest paid option. This was £79 per year and is now £95.88. Similar price bumps apply internationally.

While 20 per cent may seem reasonable for twice as much storage, this assumes that you need it. "I am so outraged. I signed up to Dropbox for a 1TB account, paying monthly. I don't need 2TB nor can I afford the additional $60 a year they want to charge me for something I didn't initiate, ask for, or consent to," said a user on the Dropbox forum.

It is the usual cloud story: prices can change at any time, which means something that is great value when you sign up may not look so good a year or two later.

This may give users attracted by the new collaboration features pause for thought. If you adopt these features then Dropbox becomes harder to leave; you easily shunt files around but comments and discussions are more difficult to preserve.

Finally, have you ever wondered why Dropbox on Windows prompts from time to time to "please reinstall to fix all your syncing icons"?

You may need to fix your Dropbox sync icons...

The most common reason is that Windows has a limit of 15 "overlay icons" of which only 11 are available to applications. In addition, only one overlay icon can show on a file; they cannot be combined.

Since a number of applications – such as OneDrive, Dropbox and TortoiseSVN – like to use overlay icons to show file status, the limit soon gets used up. Windows has a crude way of deciding who wins, which is alphabetical order in the Registry Editor. 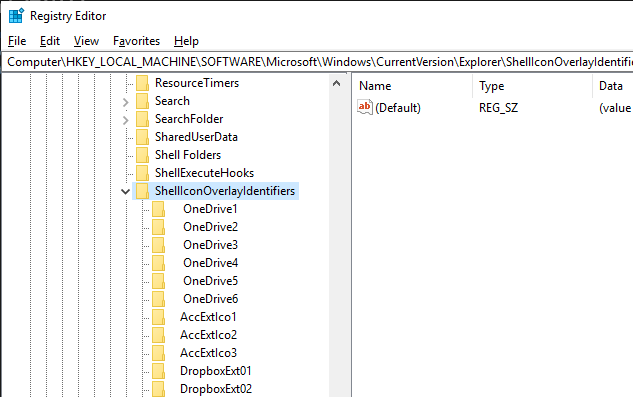 ... and this is why. Spot the prefixed spaces as vendors fight to be in the top 11

This means that applications simply prefix their icons with spaces in order to get to the top of the list. They are also not too good at cleaning up, so if you inspect the registry entry you see duplicates distinguished only by the number of leading spaces.

Not a good user experience, and a bizarrely small limit in a dark corner of Windows. In 2009, Microsoft's Raymond Chen argued that "overlays are not a good way of presenting information" but the OneDrive team apparently does not agree. Since there are six OneDrive overlays and 10 DropBox overlays, it is actually impossible for both sets to be fully functional. A modern operating system?

Maybe this is another factor behind Dropbox wanting you to use its own app.

macOS users shouldn't be too smug. Apple is pushing its own iCloud storage, which applies to the Desktop and Documents folders by default, and it does not work smoothly with Dropbox. "We do not currently support a configuration where both iCloud and Dropbox sync the same files," said Dropbox support.