As above, so below: El Reg haunts Scaleway's data centre catacombs 26 metres under Paris

Going underground, where the servers are caged and there's water around

"We've built it in an old fall out shelter, 26 metres beneath Paris," they said. "Want to come and look?" How could we resist?

With city space ever scarcer and more expensive, but latency requirements only increasing, companies have been looking at innovative ways of getting data centres closer to the action. 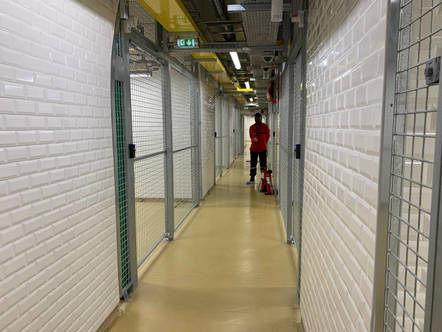 Yes, those tiles do look familiar... freshly grouted and sealed by the same folk who supply the Paris Metro with its, er, slick look (click to enlarge)

Microsoft memorably sank a data-centre-in-a-can in the North Sea with Project Natick last year. Scaleway has gone a little closer to home with one in a bunker.

Built in 1936, the air raid shelter was supposed to keep hundreds of nervous Parisians safe for months in the event of an attack. The bunker, 26 metres below ground, was upgraded and maintained throughout the 20th century until it was abandoned after the end of the Cold War.

Following a short afterlife as an occasional party venue, the damp underground hole was in a sad state when Scaleway snapped it up.

The company increased the height of tunnels by a metre and installed pipes into the walls to drain excess water. Paris, like many cities built next to rivers, is a bit damp underground. The bunker is also surrounded by chalk, according to CEO Arnaud de Bermingham.

Descending via lift reveals something that would not look out of place in the Paris Metro, just without the pungent aroma often found on the platforms and stairwells.

Bermingham explained that the gleaming white tilework was not an aesthetic choice – the company selected the outfit responsible for Paris's Metro to seal the damp surroundings, install drainage and cover the walls and arched ceilings with tiles.

The drainage manifests itself in gutters that run around the corners of the rooms holding racks of hardware leading to pipes below. The total surface area of the underground DC is 2,000m2 (for more specs see this PDF). 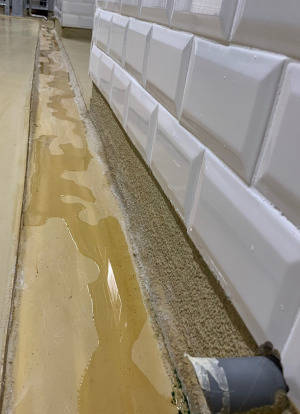 Bermingham told us the company couldn't cover the channels since issues with air pressure could interfere with the flow of water. He went on to assure us everything was "under control" with regard to the steady trickle from the surrounding chalk.

Laurent Uber, VP of Data Centres at Scaleway, clarified the watery situation a little further: "The water channels have a 2 per cent slope toward the floor drains," which are naturally regularly cleaned. He added: "The air humidity is controlled by the direct expansion air conditioning system, which has a high dehumidification capacity due to its very low average surface temperature on the terminals, thus condensing the humidity in the air."

Vibration sensors ward off threats behind the walls. While it would take quite some determination to break into the bunker – one would have to overcome the biometrics, breach the lift, cut through the dual steel gates, and then have to rip open the steel cages housing the racks – there is an ickier option.

A representative from Scaleway pointed out that the bunker was relatively close to the catacombs of Paris, so an enthusiast armed with time and tunnelling gear could, in theory, gain access.

Hence alarms to warn of an impending catacomb zombie attack.

While there are batteries to keep the data centre ticking over for a couple of hours in an outage and a couple of diesel generators to run things for longer, cooling is a challenge. A spokesperson for Scaleway told us that heat from the data centre (known as DC4) was used to warm 150 apartments in the Paris Habitat, a housing estate in the city's 15th arrondissement, including 50 per cent of hot water needs of lucky residents.

Another Scaleway data centre in France, DC5, had its own brush with excess heat earlier in the month as a fire at a nearby company, responsible for processing industrial waste, came a little too close to for comfort.

While fire defences held in that instance, the fact that DC5 used massive quantities of outdoor air to cool the data centre made things a little problematic.

The company currently has four data centres in France and one in the Netherlands – with another on the way in Warsaw. Once done, it will then add the necessary gear to make the bunker a full Availability Zone aimed, according to Bermingham, at customers reluctant to entrust Microsoft and Amazon with their data. European lawmakers, such as the French government, are very much on the company's radar.

The toys to be dropped into the mostly empty chambers beneath Paris will include gear for bare metal, Arm and GPU cloud instances, as well things a little more general purpose.

Scaleway has historically designed and made much of its own kit. "Designed and built in France," as Bermingham proudly told us. However, with the likes of Dell sponsoring ScaleDay, the company has recognised the need for third parties if it is to match the pace of its cloud competitors. That agility and top-notch customer service is how the gang plans to meet the challenge of the tech giants. Not being a global US mega-corporation won't do any harm either as far as increasingly nervy European countries are concerned.

And customers wanting just a little more privacy in the data dungeon can also specify their own personal cell.

Sadly, the obvious use for such a facility beneath the streets of Paris, namely the storing of wine, is off the cards at the moment according to Bermingham. Unless you have pockets deeper than, say, a repurposed fall-out shelter. ®