God money I’ll do anything for you 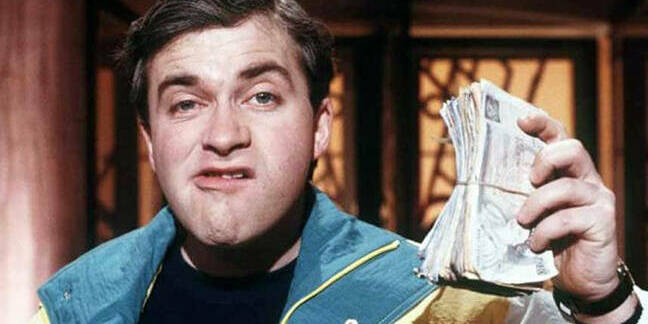 Something for the Weekend, Sir? "People love being sold to."

The guests flicked glances at each other in disbelief but were too polite to say anything. We were at my old business partner's retirement party and he was giving the after-dinner speech. Did he just say what I thought he said?

"I learnt early on that if you can sell something in the right way, people simply adore it."

This conclusion followed an anecdote in which, as a lad being paid a few pennies to make deliveries for the local baker, he'd fallen off his bicycle into a puddle during a rainstorm and got the loaves wet. Ah bless. You could cry for the little fellow.

Now here's where his life choices and ours clearly headed in different directions. Me, I would have trudged back to the shop, sick with shame and worry, to make my apologies and incur the baker's wrath. More sensitive types might have considered cashing in their paper-round savings and stowing away on board the next liner to Australia. But not this kid, oh no.

Instead, he went on a charm offensive, determined to complete his delivery rounds regardless. By the end of the morning, he managed not only to sell all the damp bread but make a little extra profit than usual by convincing customers on the doorstep that the soggy wrapping was a special product feature to prevent it from drying out too quickly.

Inevitably a lifetime of success in media sales followed. You can't argue with the results. People love being sold to.

People want to believe rubbing rose-scented butter around their eyes will make them appear younger. They are convinced that hideous cars are beautiful. They are desperate to believe that being famous on social media is important. They want to be assured they are doing, saying or thinking the right thing, despite overwhelming evidence to the contrary staring at them in their butter-smeared faces. Given the choice between challenging facts and confirmational bollocks, which do you imagine people find more appealing?

You can apply this statement to explain anything that is quite clearly bonkers. In politics, for example, it explains how billionaire Donald Trump can project himself as a man of the people; or how compulsive liar, proven cheat, serial failure, documented racist and tape-recorded colluder in threats of physical violence Boris Johnson is the most popular candidate to be the next British prime minister.

Which brings us to Facebook's digital currency project, Libra. The MSM (mainstream media) has just woken up to existence of Libra this week when Facebook announced a plan to develop related financial services under the brand name "Calibra". Of course the real MSM (mainstream money) has been keeping tabs on this terror for ages.

My esteemed Reg colleague Thomas Claburn has already skewered Facebook with considerable precision and more kinetic force than I could ever muster.

Which digital company has the worst possible reputation for the mismanagement of the personal data of its customers? And this is the company to which you would be happy entrusting your financial data?

Hang on, not just your financial data but your very finances themselves!

Facebook makes a big deal of the privacy features and trustworthiness of the project. This alone should be enough to make anyone run a mile. Once you take on board the cautious wording of the empty promises and the various caveats written into the text of the white paper, you'll want to run another 10.

My favourite promise is "Calibra will not share account information or financial data with Facebook, Inc. or any third party without customer consent". Actually, that sentence is shielded with the clause "Aside from limited cases…" Who do you imagine will be setting the limit of such cases?

Oh, hang on, Facebook gives an example to put our minds at rest. "Calibra customers' account information and financial data will not be used to improve ad targeting on the Facebook, Inc. family of products."

As for "customer consent", we all know what that means: a measly worded on-screen pop-up that insists you click YES to use the software and simultaneously grant them consent to roger your anus with a monkey puzzle branch on Tuesdays and Sundays, or click NO and be denied all access to the system without further explanation.

The essential part of any valid privacy promise would be to state how data misuse would be policed and prevented. And of course that's the bit that's missing. There's a bit headed "Preventing fraud and criminal activity" but this turns out to be Facebook giving itself even more permission to bugger around with your data: "Information may be shared to prevent malicious activity, such as instances of fraud, security threats, or criminal activity." So that's all right, then.

Privacy is one thing. The underlying platform is another. Like Facebook's record on the former, digital currencies have an embarrassing performance history with the latter.

Inevitably, Libra is based on blockchain. Blockchain is a clever little thing at maintaining data integrity (not security, mind, only its legitimacy) but the one thing it's spectacularly bad at is pretending to be money. If blockchain is implemented poorly, as it is in Bitcoin, every financial transaction you make with it can take not fractions of a second but sizeable fractions of an hour to complete. As a commodity to be bought and sold on the money markets, Bitcoin is fabulously unstable – which is why its traders find it so appealing – but the transaction lag makes it quite useless as a means of currency itself. And as more people adopt Bitcoin, the half-arsed distributed structure ensures it gets slower and crappier.

In fact, Bitcoin is now such a mess that it has been borked, corked and forked several times over just to keep some semblance of its notional use for buying and selling things.

Libra, on the other hand, looks on the surface to be better conceived for its primary purpose as a means of exchange, and screenshots of Calibra financial services apps indicate an attempt to appeal to the public by conforming to (currently) popular smartphone UI conventions. In Facebook's favour, Libra isn't conceived as a lawless Wild West of coin-mining farms and anarchic armies of hikikomori with over-powered PCs and body odour problems, whittling away at their parents' overnight electricity bills by examining your blocks in detail while peeing into used two-litre cola bottles.

One problem is that simply looking at the documentation and trying out a demo won't tell you whether Calibra financial services will fly like the wind or limp like a one-legged pigeon. You can read the white papers if you like, where you can yawn over conceptual details such as how the Libra blockchain employs smart contracts and ensures data integrity through Merkle trees.

Here's the clincher, though: Facebook says Calibra-managed transactions are going to cost nothing or next to nothing. This is great to hear but in order to be accepted as a Founding Member of the Libra Association in charge of rolling out the project around the world, you need to invest at least $10m. Now my mathematics are rusty: roughly how long does it take to recoup your $10m if there's no coin-mining incentive and, given that transactions cost nothing, no proof incentive either?

I don't care that Facebook claims it won't be running the show but merely contributing to it: all participants are in it for the profit rather than the warm glow of enabling your Gran in Sydney to send you AUS $5 on your 37th birthday without incurring international transfer fees. The ROP has to come from somewhere, and investors are probably happy to put their trust in Facebook's biggest commercial strength: its possession of your personal data and the nefarious use made thereof by paying customers.

And here's the bonkers bit: people will love it.

Despite Facebook's disastrous and hugely public trail of ethical irresponsibility and privacy failure to date, the Libra and Calibra combination will prove to be an unqualified and outrageous success. People want to be sold bullshit and, trust me, they will – in their hundreds of millions.

I might be foolish but even I'm not that reckless. We need Libra like a hole in the head. No, Facebook, black as your soul, I'd rather die than give you control.

What do you reckon, Miley?

Alistair Dabbs is a freelance technology tart, juggling tech journalism, training and digital publishing. Readers who fear that Mr Dabbs has allowed negativism to get the better of him this week should be aware that he genuinely wishes the Libra Association every success in their endeavours to establish the world's first digital currency that isn't unusable, overhyped shit. @alidabbs