Cluster of rock and ice a sweltering 77K, we're told

Astronomers have measured the temperature of one of Uranus’s rings, dubbed Epsilon, for the first time. The result: the cluster of ice and rock is a nippy 77 kelvin.

Uranus, our Solar System's far-flung icy electric-blue-colored ball, is circled by 13 rings. They were only recently discovered, as early as 1977, due to their faintness. In 2017, fresh images of the mysterious planet were captured by the Atacama Large Millimeter Array and Very Large Telescope, both in Chile, that highlighted the thermal energy, or lack thereof, in its rings.

A paper to be published this month in the Astrophysical Journal (here’s the free arXiv version) describes a study of those images, and concludes Epsilon is a chilly 77 kelvin, about the same temperature as the boiling point of liquid nitrogen. Uranus’s rings are split into two sets, for what it's worth: an inner set of eleven, and an the outer pair. Epsilon is the outermost of the inner eleven. 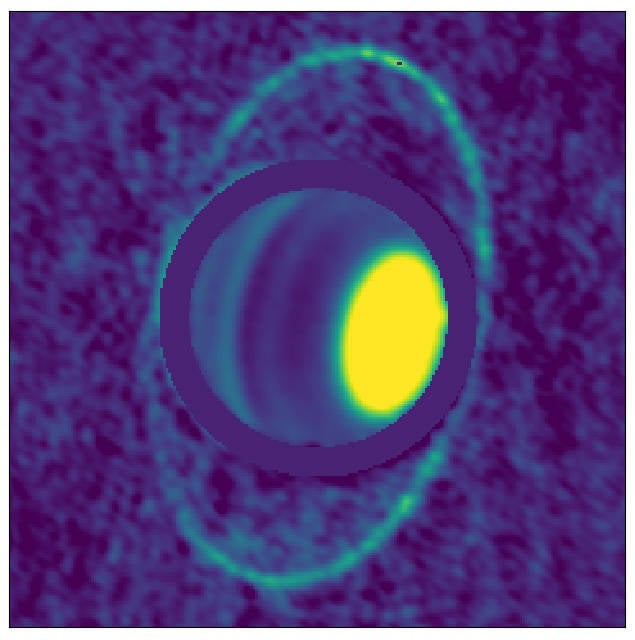 A composite image of Uranus’s atmosphere and rings at radio wavelengths taken with the Atacama Large Millimeter Array telescope. Epsilon is the bright ring you can see ... Image credit: UC Berkeley image by Edward Molter and Imke de Pater

“Saturn’s main icy rings are broad, bright and have a range of particle sizes, from micron-sized dust in the innermost D ring, to tens of metres in size in the main rings,” said Imke de Pater, coauthor of the paper and an astronomy professor at the University of California, Berkeley, in the US. “The small end is missing in the main rings of Uranus; the brightest ring, epsilon, is composed of golf ball-sized and larger rocks.”

Epsilon is also the widest ring, stretching from 20 to 100 kilometres wide, compared to Saturn’s, which are tens of thousands of kilometers across. Jupiter and Neptune are surrounded by halos of particles, too. Jupiter’s are made out of small microns-sized particles and Neptune’s are mainly bits of dust.

The images don’t quite explain where the material in Uranus’s rings comes from, however. “We already know that the epsilon ring is a bit weird, because we don’t see the smaller stuff,” said Edward Molter, first author of the paper and a graduate student at UC Berkeley. “Something has been sweeping the smaller stuff out, or it’s all glomming together. We just don’t know. This is a step toward understanding their composition and whether all of the rings came from the same source material, or are different for each ring.”

It is believed that the rings might be made out of chunks of material from asteroids, fragments of moons, or debris leftover from the creation of the Solar System over 4.5 billion years ago, that have now been captured by Uranus’s gravity. ®