We've Falcon caught it! SpaceX finally nets a fairing half after a successful Heavy launch 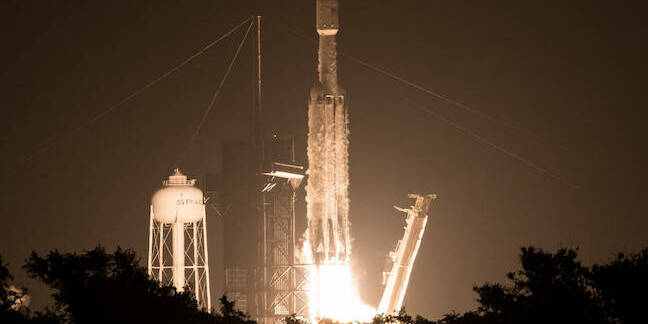 SpaceX's Falcon Heavy turned night into day this morning as the monster rocket successfully hauled itself from Kennedy Space Center's Launch Complex 39A.

The 27 Merlin engines illuminated the night sky in a manner to bring a nostalgic tear to the eye of those that remember the only Saturn V night launch: Apollo 17 in 1972 from the same pad.

With the weather cooperating and after dealing with a ground hydraulic issue which cropped up early in the count, SpaceX went ahead with loading the rocket with liquid oxygen, effectively committing the company to a launch or scrubbing for the day.

#SpaceX #FalconHeavy takes flight from Launch Complex 39A at 2:30am EDT with #STP2 pic.twitter.com/fWobJYm2dg

Launch occurred at 0630 UTC on 25 June and the side boosters of the heavy lifter were shut down and separated from the centre core approximately 2 minutes 30 seconds later. The boosters, previously used for the last Falcon Heavy launch, headed back to briefly light up Landing Zones 1 and 2 with a synchronised touchdown.

The remaining Falcon 9 first stage continued its burn for another minute before it too was shut down and separated from the second stage of the Falcon Heavy.

Unlike the side boosters, the centre core was faced with what the SpaceX PAO breathlessly described as "the most difficult landing we've had to date" with the spent booster coming in fast towards the drone ship Of Course I Still Love You, which was stationed twice as far into the North Atlantic Ocean (from Port Canaveral) than usual.

Not that anything involving landing the first stage of an orbital booster on its end atop a platform at sea should ever be described as something so mundane as "usual".

SpaceX has yet to successfully recover a Falcon Heavy centre stage. The maiden launch of the rocket saw the stage undergo a rapid disassembly after its engines failed to reignite to slow the thing down. The second did land, but subsequently toppled over.

Third time was, alas, not the charm. While the engines (the centre and two extra) ignited as planned, cameras on the drone ship captured the returning first stage appearing to miss the barge before creating its own night-into-day moment with a spectacular explosion.

Landing excitement aside, the second stage continued firing and the fairing was deployed just after the four minute mark, exposing the ride-share payload.

And the fairing? Much whooping could be heard as SpaceX finally managed to catch one half in the net strung atop Ms Tree (pic here), the ship formerly known as Mr Steven. This was the first time the company has accomplished the feat. The other half will be recovered from the water.

The company boasted that this launch included payloads from the largest number of government agencies it had served thus far on a single Falcon with 24 satellites from the likes of the Department of Defense, the US Air Force and NASA to be deployed over more than three hours (and another three restarts of that second stage engine.)

While SpaceX will be chuffed to demonstrate that its Falcon Heavy can be trusted for government payloads, the science carried on the monster rocket is hugely interesting and includes the crowdfunded LightSail 2.

Spencer: When we deploy #LightSail2's solar sail, we'll choose a pass where we get a half hour of coverage from our ground stations in Kauai Community College, Cal Poly San Luis Obispo, Purdue University, and Georgia Tech. pic.twitter.com/P6N2G88hU2

While the Falcon Heavy was getting ready to do its thing, three International Space Station (ISS) crew members returned safely to Earth in the Soyuz MS-11 capsule. The 0847 (local time) landing in Kazakhstan of Commander Oleg Kononenko of the Russian Space Agency, NASA's Anne McClain and Canadian David Saint-Jacques marks the end of a mission that began on 3 December.

MS-11 was, of course, the first crewed Soyuz to launch following the inflight abort and subsequent surprise return to Earth of October’s Soyuz MS-10.

The gang also conducted spacewalks during the 204-day mission and performed the first in-space editing of DNA.

The remain trio of 'nauts still on the ISS, NASA's Nick Hague and Christina Koch, and Commander Alexey Ovchinin, won't have long to wait until the next contingent arrives. ESA's Luca Parmitano, NASA's Andrew Morgan and Alexander Skvortsov of Roscosmos are due to launch aboard Soyuz MS-13 from Baikonur on 20 July.

Roscosmos was not the only band of rocket boffins battling baulky batteries with its pesky Proton, as ULA was forced to postpone this week's Atlas V 551 launch to no earlier than 9 July.

The mission, from Space Launch Complex 41 at Cape Canaveral Air Force Station, is due to send into orbit the fifth in the Advanced Extremely High Frequency (AEHF) series of satellites designed to provide jam-proof and highly secure connectivity for the US military.

LAUNCH ALERT: The launch of the #AtlasV #AEHF5 is delayed due to a vehicle battery failure discovered during final processing. Additional time is needed for our team to evaluate and replace the battery. Launch is targeted for NET Tuesday, July 9. https://t.co/VsjWiGAOLx

When it gets off the ground, it'll be the 10th flight of the Atlas V in the 551 configuration, and just the sort of juicy government contract SpaceX has its eyes on following the continued success of its Falcon series of rockets. ®