Astrophysicists have found the single largest molecule yet floating in the interstellar medium, the soup of matter and radiation that floods space in between all of the universe’s objects.

The molecule known as Buckminsterfullerene (C60) is made of 60 carbon atoms arranged in a soccer-football-thing-like structure. Carbon is a versatile element; it can form several types of chemical bonds to arrange itself in various ways. In the interstellar medium (ISM), the Buckminsterfullerene molecules – or Buckyballs – have been ionized by ultraviolet radiation released by stars.

This energy frees an electron so that the molecule has a slight positive charge (C60+). These electrically charged balls are the heaviest molecule to be discovered in the interstellar medium so far, according to Martin Cordiner, an astrochemist from the Catholic University of America in Washington, who led the study.

“Prior to the detection of C60, the largest known molecules in space were only 12 atoms in size. Our confirmation of C60+ shows just how complex astrochemistry can get, even in the lowest density, most strongly ultraviolet-irradiated environments in the galaxy,” he said on Tuesday. 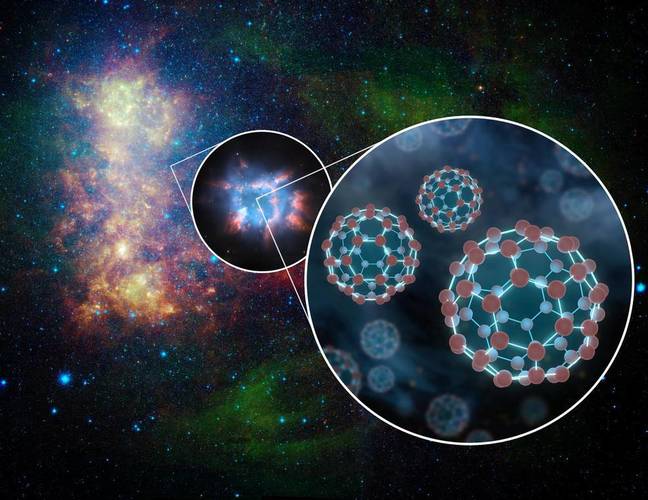 Scientists are particularly interested in complex carbon molecules like Buckyballs since most living matter, at least here on Earth, is made out of organic material that includes carbon. The fact that there are chunks of carbon drifting through space indicates there's perhaps carbon in other systems and on other planets, and those worlds may thus have life as we know it on them.

There are probably other hefty complex carbon molecules out there in the ISM, Cordiner believed. Scientists study the ISM’s contents by observing incoming star light. That radiation is absorbed by atoms in the medium. Individual elements absorb specific amounts of energy, so scientists can work out what exactly is in the ISM by studying what's actually absorbed. Some absorption patterns, also known as diffuse interstellar bands (DIBs), stand out since they hint at compounds that haven’t been seen on Earth.

The researchers spotted the ionised Buckyballs by studying light radiated by blue super-giant stars in the Milky Way observed by NASA’s Hubble Space Telescope. The results, published in the Astrophysical Journal Letters, suggest that these positively charged spherical molecules are common across the far reaches of the ISM.

“Today, more than 400 DIBs are known, but apart from the C60+ few newly attributed to none has been conclusively identified,” said Cordiner. “Together, the appearance of the DIBs indicate the presence of a large amount of carbon-rich molecules in space, some of which may eventually participate in the chemistry that gives rise to life. However, the composition and characteristics of this material will remain unknown until the remaining DIBs are assigned.” ®