Hands On One of the more delightful side effects of the current obsession with Apollo 11 at 50 has been the arrival of nerd-pleasing Lego. Today, an injured Vulture had a crack at building his own very Lunar Module.

Lego had already, er, launched its monster Saturn V set after a successful Ideas campaign and, while that set was a joy to build, it lacked a little in the detail department, with the tiny astronaut figures a reminder of what scale does to things.

With the anniversary of the first Moon landing looming, Lego has followed up its crowd pleasing Saturn with a rendering of the Eagle lander in plastic blocks, replete with two minifig astros, so you can recreate that first step and, heck, maybe even snap a photo or two of Armstrong.

Or have Buzz Aldrin get out first this time.

There are three distinct parts to the build: first the lunar surface itself; then the descent stage, which is delightfully detailed and stimulated a discussion of fuel and oxidiser since Lego has thoughtfully concealed the four tanks within the stage; and finally, the detachable ascent stage, which popped open to reveal the cramped confines of the LM. 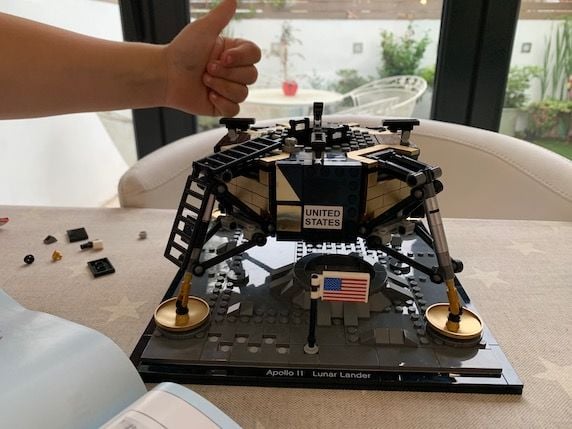 The Descent Stage. Thumb not included.

To be a bit nerdy about things, the two-door hatch was a bit odd, and it was a shame that the docking port was non-functional (should Lego decide to bring out a to-scale Columbia Command and Service Module, replete with the loneliest minifig of all.) Also, with the effort that had gone into the descent stage with regard to the fuel tanks, it was sad to see such detail skipped for the ascent stage.

Of course, had Lego gone to scale with the skin of the thing, then the chunky plastic bricks would have had to have been replaced with gossamer thin foil. So I think we can cut the team some slack.

The total build time, with three-and-a-half hands at work (this Vulture has an injured talon), came in at around three hours. If one factors in the question-and-answer session on how humans actually got to the Moon, why did they stop and why was he called Buzz, it was more like six hours. 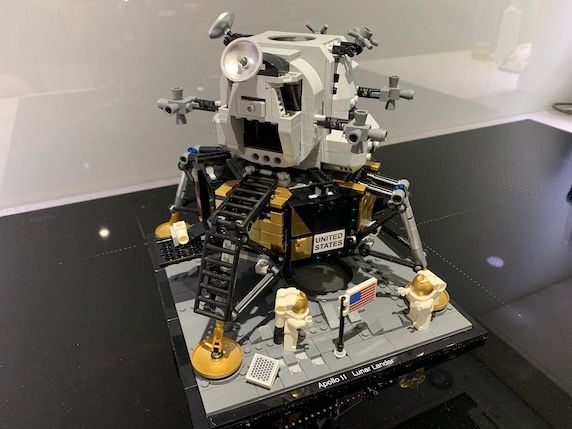 The seven-year-old already has plans to improve on NASA's design with elements scavenged from an old Space Shuttle set and the remains of something from Frozen.

Lego has played a blinder with this set. You don't need to be a space fan to enjoy building it, but you'd be hard-pressed to emerge at the end of it without an appreciation for the mission and a desire to learn more.

Now, if you'll excuse me, I have to go and explain why a Shuttle's delta wing would not have helped Eagle "fly" over the surface of the Moon. After we try to fit one, of course. ®