I can absolutely do that for you, Dave

The RPG Greetings, traveller, and welcome back to The Register Plays Games, our monthly gaming column. This time we head into low Earth orbit for a space whodunnit with Observation. But first let us fondly bask in the nostalgic glow of classic adventure games – the primordial goop to which Observation clearly owes its lineage. Oh, and E3 was a thing that happened.

In the '90s, adventure games told stories in a way other genres could not for years to come. Their origins lie in the text-parsing landmarks of the 1970s like Colossal Cave Adventure and Zork, which relied not on graphics but the player reading what was happening and typing in their responses. This meant their worlds could be immersive without the need to visually render one.

But as tech advanced, the adventure game blossomed. Many look to LucasArts, founded in 1982 by a little-known filmmaker by the name of George, as the golden standard thanks to 1990's pirate-themed The Secret of Monkey Island and its three hilarious sequels, Monkey Island 2: LeChuck's Revenge (1991), The Curse of Monkey Island (1997, below) and Escape from Monkey Island (2000).

Starting out on Amiga, MS-DOS, Macintosh and the like, the first two were triumphs of pixel art.

Because the backgrounds were mostly static, the designers could agonise over lush, colourful and detailed environments, while the SCUMM engine (Script Creation Utility for Maniac Mansion, a 1987 LucasArts title) fleshed out the interactivity hinted at in the genre's earliest days.

That they were both rebuilt from the ground up for special editions in 2009 and 2010 is proof of their enduring appeal.

Curse moved into a beautiful cel-shaded style with full voice acting, and by Escape everything was 3D, ditching point-and-click for the keyboard. Grim Fandango – a film noir journey through the Mexican land of the dead – must also be mentioned as a LucasArts cult favourite from this era, and though it too would eventually receive an HD upgrade in 2015, the genre had stalled by the noughties.

When LucasArts bailed on adventure games, company alumni founded Telltale Games in 2004. For almost a decade, Telltale slogged it out developing episodic games around existing intellectual properties, including Monkey Island, but it wasn't until 2011's The Walking Dead that the studio hit a home run. Despite subsequent series based on Game of Thrones, the Fable comics, Batman, Borderlands, even Minecraft and more, sadly Telltale ran out of cash and closed at the end of last year. 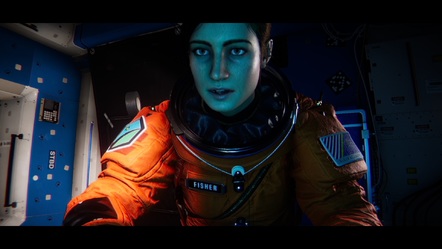 Our friend and master, Dr Emma Fisher (click all to enlarge)

But they did just enough to rekindle interest in the style while trading out the often goofy humour of old LucasArts games for genuine drama. Which brings us to Observation, a slow-burning sci-fi thriller released 21 May and developed by Scottish indie studio No Code. 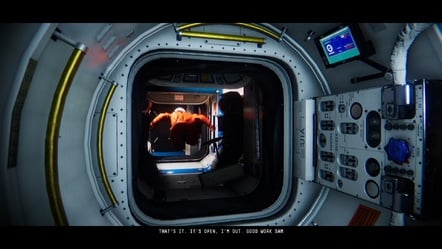 I'm glad I could open the airlock for you

This moody space opera is firmly in the tradition of classic adventure games, but more cinematic than ever before. The game opens following a catastrophe aboard the space station Observation in 2026. Only one crew member is accounted for – and it isn't the player. In a refreshing inversion of sci-fi tropes, you assume the role of SAM (System Administration Maintenance), the station's malfunctioning AI. 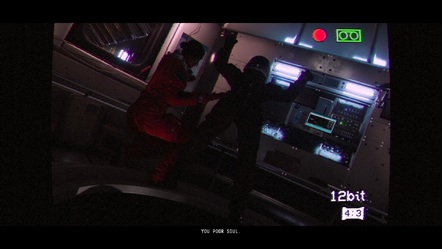 Well, we found one of the missing crew

Now, before you start playing out power fantasies of a robot gone rogue, note that Observation is rather "on rails", literally and figuratively. It lacks the butterfly-effect choices of Telltale titles, where the player would reach a branching junction in the story and be forced to decide what should happen next. Which makes sense really – you are an AI compelled to obey your programming. 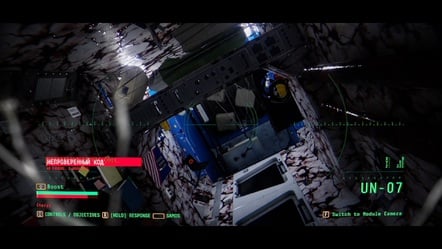 You also lack a body. Gameplay takes place through a camera lens, scanning rooms for systems to override and data to rebuild your fried memory. At various points, however, puzzles require the use of a spheroid unit, which glides along the dark corridors on puffs of CO2. Though the latter offers a semblance of freedom, both methods feel clunky and claustrophobic, and the slow whirring of the camera's hinges as it pans across a room for the nth time may drive the less patient player to frustration. 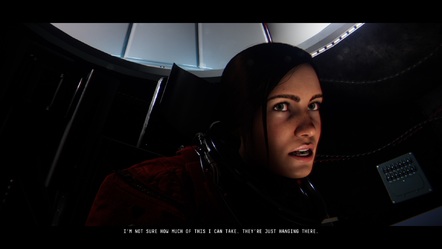 This isn't exactly an action-packed game, but those familiar with the genre shouldn't mind. In fact, the pacing is ideal and the thing can be polished off in less than 10 hours. Unlike 1993's Myst, you won't get stuck for three months* because the puzzles are too obscure (incidentally, The Witness is a decent and recent "spiritual successor" to scratch that itch). Logic and lateral thinking will progress the storyline, which makes it a nicely accessible title if you fancy actually completing something for once. 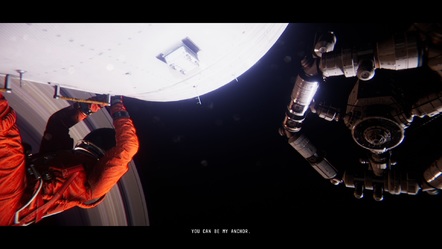 But it's the drive to unravel Observation's mysteries that will cause three hours to pass unnoticed. The crew haven't been made party to what their real mission is supposed to be, each assigned menial roles far below their academic abilities. When SAM is first rebooted by medical officer Dr Emma Fisher after the disaster, she sets him a number of tasks to stabilise the station, which is spinning perilously out of control.

There's a strange motivation to be a good little robot and perform each chore efficiently, but the obstacles in your way help capture the sense of having a corrupted memory core as you blunder through each solution. A recurring broadcast of unknown origin insisting only that you "BRING HER" maintains the game's pervasive dread, as does the delightfully creepy dark ambient soundtrack. 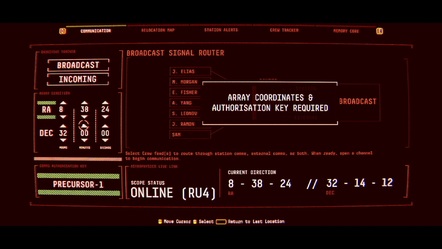 Anyone got the co-ords for Ground Control?

Obviously, things get much weirder from here on out, but we are loath to start digging into potential spoilers. 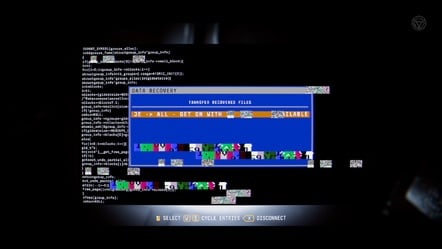 The graphics are as good as should be expected for Unreal Engine 4 in 2019, and the lo-fi interfaces SAM pokes are reminiscent of 2014's pant-stainingly scary Alien: Isolation. As it so happens, No Code's founder, Jon McKellan, was on Isolation's design team. Though facial animations at times graze the Uncanny Valley, the dead-on detailed depiction of life in space more than makes up for it.

Platform: PC, PlayStation 4
Developer: No Code
Publisher: Devolver Digital
Distributor: Epic Games
Price: £19.99 – however, at the time of writing there was a discount of £2 then for some reason Epic was giving another tenner off everything. I got it for £7.99. Bargain.

There are a clutch of niggles, however. You are nominally the entire space station, but Observation has a few immersion-breaking "invisible walls" such as systems you can't do anything with for no apparent reason other than being plot devices later on. If playing on PC, some puzzles will be impossible without a gamepad. Then there's the fact it is distributed for PC exclusively on the half-baked Epic Games Store – no hours played, no achievements – but that is another kettle of fish. 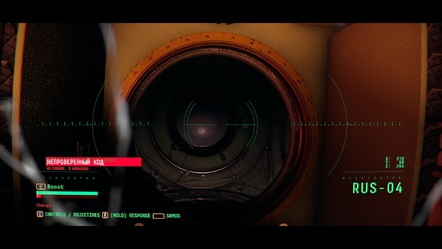 Our sphere has taken a bruising

That said, Observation is certainly original, and fans of hard sci-fi like 2001: A Space Odyssey, Alien and Interstellar will relish this leap forwards in the current adventure games renaissance – if only for a few quiet evenings. We've come a long way from telling people they fight like dairy farmers. ®

Of course, it was E3 this month (11-13 June). There were some cool things and a lot of dross (damn it, Bethesda) so here is a super-brief rundown of what to be excited about. Larian Studios, dev of the fantastic Divinity: Original Sin 2, is working on Baldur's Gate 3. CD Projekt Red revealed the release date for the much-anticipated Cyberpunk 2077 as 16 April 2020. Keanu Reeves is in it.

We got our first glimpse of Vampire: The Masquerade – Bloodlines 2, due out Q1 2020. Obsidian's The Outer Worlds is arriving in October, and the first part of Square Enix's ground-up reimagining of Final Fantasy VII will drop 3 March 2020. A surprise remaster of Final Fantasy VIII is due before the year ends. EA will continue its stewardship of Star Wars with Jedi: Fallen Order and teased some Souls-like gameplay. It's coming out on 15 November.

Bethesda failed to apologise for the trainwreck that is Fallout 76, only announcing some content updates that should have been there from the start and (*groan*) a Battle Royale mode during a free trial week. The best thing from its conference was news that Doom Eternal would release 22 November on all platforms – including Google's cloud-gaming service Stadia.

In Nintendo Switch land, footage of Animal Crossing: New Horizons was shown, but fans were told that it would be delayed till next year to avoid "crunch" working conditions – causing Ninty stock to tumble 3.53 per cent. Capitalism is great. A sequel to The Legend of Zelda: Breath of the Wild is in the works for late 2020 and, sticking with Zelda, Link's Awakening is also being remade with a release date of 20 September.