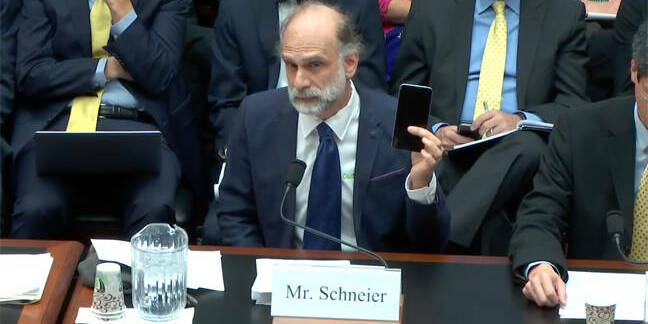 Infosec veteran Bruce Schneier has said he'll step down as a "special advisor" to IBM's security business to, in part, focus his time on teaching the next generation of security pros.

Schneier said he also wanted to focus on work with nonprofit projects including Tor and the Electronic Frontier Foundation (EFF), where he is a board member.

The cryptographer, formerly BT's chief security technology officer, has been writing about security since 1998 and has produced more than a dozen books, as well as hundreds of articles, essays and academic papers.

Schneier started working at IBM in 2016 after Big Blue snapped up his startup, Resilient Systems (previously called Co3), where he served as CTO, for a rumoured $100m.

The partnership started well enough. "Everything I've seen so far indicates that this will be a good home for me. They know what they're getting, and they're still keeping me on. I have no intention of changing what I write about or speak about – or to whom," Schneier said at the time.

Schneier describes himself as a public-interest technologist – which points to one of the potential reasons he might not continue working for a global corporations past his contract obligations.

"I will continue to write and speak, and do the occasional consulting job," he said of his future plans. "I will continue to teach at the Harvard Kennedy School. I will continue to serve on boards for organizations I believe in: EFF, Access Now, Tor, EPIC, Verified Voting. And I will increasingly be an advocate for public-interest technology."

We'll finish this post with a quote from the website SchneierFacts, which compares him to Chuck Norris: "Bruce Schneier only smiles when he finds an unbreakable cryptosystem. Of course, Bruce Schneier never smiles."

As Schneier himself has said: any person can invent a security system so clever that he or she can't imagine a way of breaking it. ®

Infosec's cool uncle says to hell with the carrot

Q&A: Crypto-guru Bruce Schneier on teaching tech to lawmakers, plus privacy failures – and a call to techies to act

Schneier warns of 'perfect storm': Tech is becoming autonomous, and security is garbage

RSA 'Everything we do has a moral dimension ... we are responsible for the world we create with our technologies'

Bruce Schneier: The US government is coming for YOUR code, techies

OSLS Open source has won, but victory may be fleeting