The Register took a spin down memory lane to have a look at the just-released-in-the-UK Apollo 11 film and to ask the question: is it any good? We are pleased to report back on our findings.

Squeaking in just before the 50th anniversary of the first crewed Moon landings, the documentary pieces together recently uncovered 65mm footage with more conventional 35mm and 16mm film as well as television footage to attempt to tell the Apollo 11 story once again.

It is, of course, a story that has been told many, many times before. Damien Chazelle's star-studded First Man had a crack at it from the perspective of the infamously private Neil Armstrong. Tom Hanks produced the rather excellent From the Earth to the Moon series for HBO just over 20 years ago to attempt to explain what Apollo was all about. And, of course, there are any number of books and documentaries dealing with that first landing. 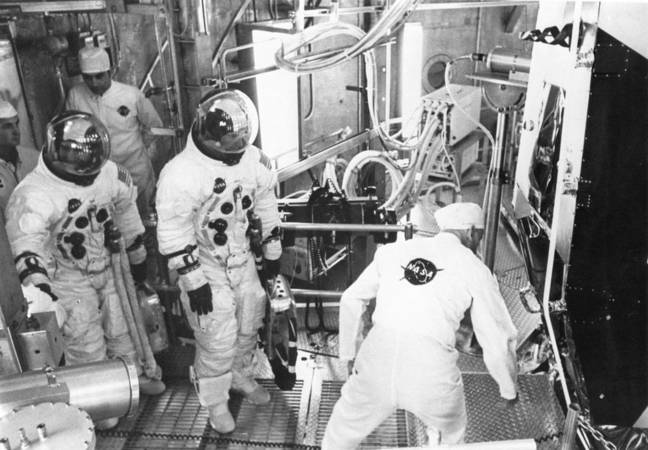 Apollo 11, produced and directed by Todd Douglas Miller, does things a little differently, eschewing narration to allow the subjects of the documentary to speak for themselves as well as show off some truly breath-taking footage amid the nifty editing.

Certainly, the 65mm visuals are stunning, especially when viewed on the towering IMAX screen. The Saturn V has truly never looked so good, nor so vertiginous as a camera peers down from above the command module, or follows the stately progress of the crawler as it transports the behemoth to the launchpad. 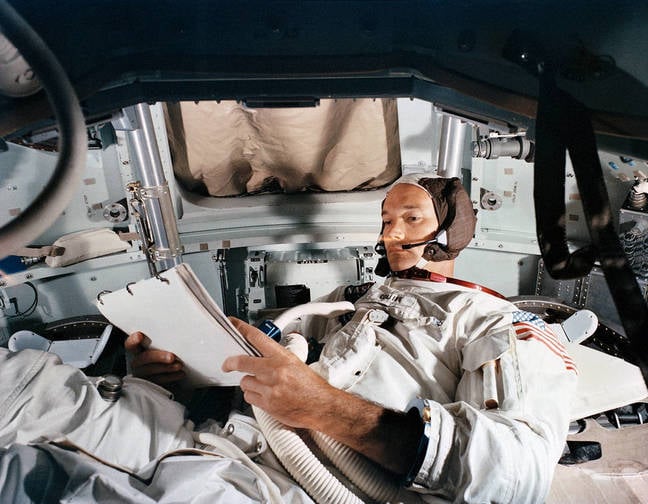 Of course, the downside of the startling clarity of the 65mm footage is the jarring downgrade of the inevitable switch back to 35mm or 16mm film – the film feels very bookended by the glorious visuals with shots of the launch and spectators and the final recovery of the astronauts aboard the USS Hornet in that sumptuous large format.

The audio can also be a tad grating on occasion, with the joins showing where the foley artist was working overtime to recreate the chirps and whirring associated with 1960s technology. Synchronising the audio (for example, from the interior of the spacecraft) with the visuals was also clearly a challenge for the film-makers but is, on the whole, very successful.

Nit-picking aside, the 93-minute running time flies by as the story of the launch, landing and return is told. And despite every audience member knowing how things will play out, the filmmakers still manage to insert drama into key parts of the tale (no spoilers) right up until the capsule makes its final splashdown.

Neil Armstrong, Buzz Aldrin and Michael Collins are, as one would expect, featured heavily throughout, although the trio enjoy only the briefest of biographical montages. More impressive are the behind-the-scenes shots, from the firing room in Florida to the famous Mission Control Center.

The latter, of course, was restored over the last two years to look just as it did during the Apollo era, although without the stultifying fug of cigarette smoke.

From this legendary room, America conducted some of its most amazing space missions. The Apollo Mission Control Center has undergone a massive restoration to bring the room back to life as it appeared during the Apollo era. Learn more: https://t.co/lUs2wQXp9L pic.twitter.com/BGyZg7GcjU

For we who will never get to sit behind those consoles, Apollo 11 is the closest anything has yet come to recreating the excitement and atmosphere of the time. And while the visuals of the Saturn V and moonwalk are impressive, other shots convey the fragility and considerable risk of the endeavour.

Of course, the documentary does not dwell on the societal ills of the time, preferring to focus on the enthusiasm of those involved in, or watching, the events as they unfold.

Niggles aside, Apollo 11 is a must-see for fans of the era: just for that glorious Saturn V footage on the big screen if nothing else. Those with less interest will come away with an awareness of the scale of the achievement.

And folk who reckon the whole thing was a hoax? Good luck looking for those strings. ®