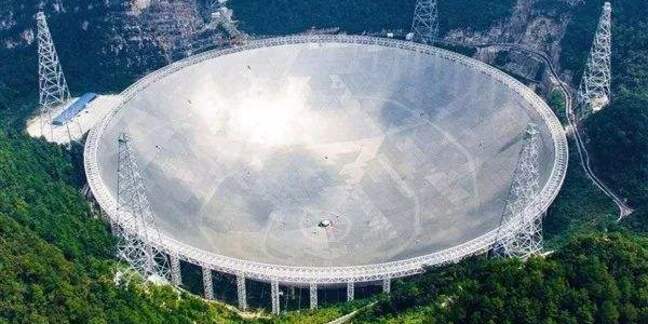 The world's largest single-dish radio telescope, an enormous white circle half a kilometre in diameter, has helped scientists uncover 84 new pulsars since it began collecting data two years ago.

Pulsars are leftover remnants of stars that have passed their shelf life and no longer burn hydrogen. The old cores have collapsed into dense white dwarfs or neutron stars.

These stars are still energetic, however, spewing regular beams of electromagnetic radiation as they rotate rapidly.

Scientists predict (PDF) that the number of observable pulsars in our galaxy is around 70,000, but less than 3 per cent of them have been discovered so far.

FAST hopes to find particularly weird pulsar specimens, ones that spin at sub-millisecond speeds or orbit near black holes as a binary pair.

Peng also said that the FAST team were using the radio telescope to find out how clumps of cold gas, a source of fuel for star formation, was distributed in the Milky Way. It also contributes to the SETI Institute by looking out for rogue signals from possible alien civilisations.

The telescope, made up of 4,450 reflecting panels, covers a range of radio frequencies between 70MHz to 3GHz. ®