'Spooky action' caught on camera – see it for yourself

Pic Physicists at the University of Glasgow, Scotland, have produced the first-ever image of a strong form of quantum entanglement, known as Bell entanglement.

To achieve this, they devised a system which fires a stream of entangled photons from a quantum source of light at "non-conventional objects" – which change the phase of the photons as they pass through.

Researchers then set up a super-sensitive camera capable of detecting single photons which would only take an image when it caught sight of both the photon and its entangled "twin", creating a visible record of entanglement.

Ladies and gentlemen, this is what Bell entanglement looks like: 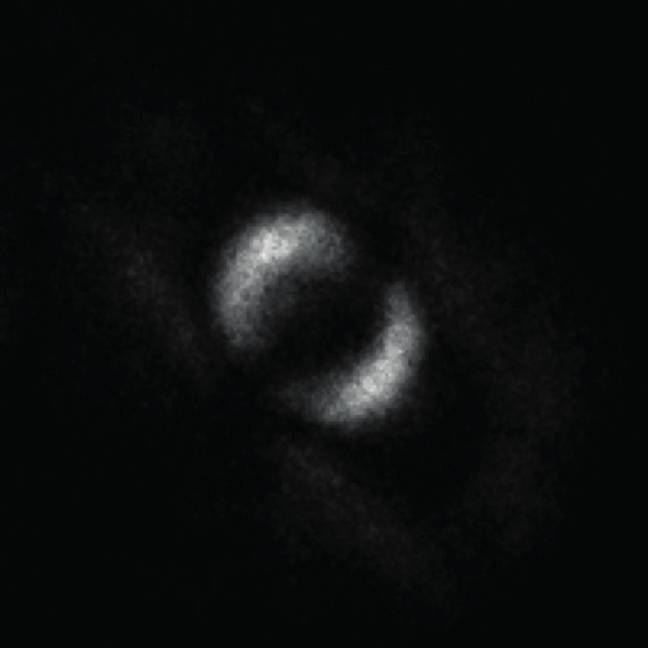 Quantum entanglement was famously described by Albert Einstein as "spooky action at a distance". In this process, two or more particles can be made to exhibit certain physical properties, and the change to one particle will immediately change the properties of the other, even if they are separated by hundreds of miles.

Quantum entanglement shouldn't be possible and is one of the reasons scientists find it so challenging to reconcile Einstein's general theory of relativity and quantum mechanics.

The particular type of entanglement investigated in the experiment, Bell entanglement, is named after John Stewart Bell, the author of Bell's Theorem, which rules out local hidden variables as a viable explanation of quantum mechanics.

Bell formalised the concept of quantum entanglement and was a notable critic of Einstein's principle of local realism – both the assumption that nothing can move faster than the speed of light, and the assumption that a particle must objectively have a pre-existing value in order to be measured.

Results of the Glasgow experiment were published in the journal Science Advances on Friday.

"The image we've managed to capture is an elegant demonstration of a fundamental property of nature, seen for the very first time in the form of an image," said Dr Paul-Antoine Moreau of the University of Glasgow's School of Physics and Astronomy, and lead author of the paper.

"It's an exciting result which could be used to advance the emerging field of quantum computing and lead to new types of imaging."

In the future, quantum entanglement could be used to send information encoded in qubits – basic units of quantum information that can convey one, zero or both at the same time – down the wire to create clusters of quantum computers, with considerably increased compute capacity. ®