Turning it off and on again IN SPAAACE! ISS animal-tracker kit needs oldest trick in the book

There's a bit more to it than leaning down and fumbling for reset switch, though 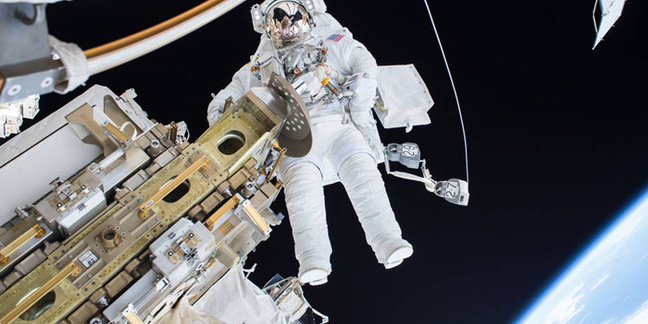 Icarus – the ambitious project to track hundreds of thousands of animals from space – has hit an unexpected delay after a specialised computer installed on board the International Space Station (ISS) refused to work as intended.

In order to fix the system, which was only switched on last week, astronauts will have to apply the oldest workaround in the book, practised by IT staff since time immemorial: they will have to turn it off and on again.

The actual process is slightly more complicated in space than it is in a corporate server room: before they can have a go at it, detailed procedures will have to be drawn up, and busy schedules will have to be cleared.

Meanwhile, teams on the ground will have to engage in a bit of tech support, with negotiations taking place between Germany's SpaceTech, which made the Icarus computer, and RRSC Energia, which leads the development of the Russian corner of the space station – in this context, essentially a space-borne data centre.

"The system was switched on, and then it turned out that the fans were running intermittently. That means that they have to be switched off and turned on one by one," professor Martin Wikelski, director of the Max Planck Institute for Ornithology and leader of the project, told El Reg.

"Apparently it's something that the Russians have experienced before," he added.

"The engineers told us that space projects always take longer than expected because each manufactured unit is a unique thing, so you always have some initial problems with systems, especially the ones we are dealing with, because this is a new CDMA communications system, basically IoT via space, and I think everybody is keen to see how it works."

The Icarus (International Cooperation for Animal Research Using Space) project has been in the works since 2002. A collaboration between German and Russian scientists, it will attempt to establish migration patterns, response to environmental changes, and whether (and how) animals can predict natural disasters like earthquakes and volcanic eruptions, among other things.

In the project, thousands of animals will be tagged with tiny transmitters that weigh less than 5g. The tiny gizmos are powered by the Sun and equipped with GPS, accelerometers, temperature, pressure and humidity sensors.

To save energy, they will stay in sleep mode most of the time, only activating when the ISS is passing overhead; this information would be transmitted by the station in advance and stored on the device.

The massive Icarus antenna block was shipped to the ISS aboard the Progress cargo spacecraft in February 2018, with the hardware weighing in at 200kg – including three receiving antennas and one transmitting antenna. The onboard computer arrived at the station during one of the previous missions in 2017.

The antenna was then installed on the exterior of the Zvezda (star) module, in the Russian sector of the station, during a spacewalk in August 2018. The computer was scheduled to be switched on last Tuesday, but the cooling fans the machine was equipped with consumed too much power when spinning up at the same time - the ISS has a very strict power budget. To fix the issue, astronauts will have to disconnect and reconnect individual fans one by one – something that could happen in "days or weeks", according to Wikelski.

Icarus is in a hurry because it is not the only project of its kind, and is competing against Centre National d'Etudes Spatiales and NASA's Argos system, which has used commercial satellites for animal tracking and environmental monitoring for decades.

Argos currently has six operational satellites and tracks about 8,000 animals at any given time. It is about to launch its first nanosat, codenamed Argos Neo, with another 24 expected in orbit by 2022. A spokesperson told El Reg that Argos has developed its own miniature transmitters too, with the smallest weighing in at 2g.

"There are two different directions: people think they can do nanosats in space, and do the same thing, but communications engineers and space engineers say, well, you can't beat physics. If you want to have small tags on the ground, it's hard to also have small satellites in space," Wikelski said.

"Argos is certainly a great system: we have used it a lot from the beginning, and we are still using it. Yes, it is old, and they have to be backward-compatible, in many cases, and they have some restrictions, and we have a different set of requirements. We're the new kid on the block and we have to show that we are good." ®