If you missed the presentation from Musk's latest company Neuralink on Tuesday, here's what the plan is: Build an implant that sticks electrodes into the brain to collect and transmit electrical signals that pass through a chip and onto an external device, like a computer. Musk promises that the brain-machine interface (BMI), or "neural lace", will help paralyzed people move again or solve brain disorders like Parkinson's or Alzheimer's disease.

You can watch the talk below.

OK, sure, but nothing about this idea is particularly new. There are several research labs and companies around the world that have been working on BMIs for years, and there's still nothing on the market yet. It's just that Musk has enough money and power that everyone seems to be wowed when he says he wants to jam rods into human brains by 2020.

The best demonstration of this type of technology lives in science fiction, such as Arthur C Clarke's "brain cap".

In order to assess how feasible these devices are in the real world, you have to have a basic idea of how the brain works. The mass of jelly protected by our skulls houses some 100 billion neurons that constantly communicate with one another by firing electrochemical signals that can be measured by electrodes as a voltage.

Musk wants his BMIs to do two things. One, detect these output voltages to decipher what neurons are being excited in order to work out what the brain is trying to do. For example, the information gathered from neurons firing to get a body part to move could be fed into a prosthetic limb. Two, he wants boffins to stimulate specific brain regions by zapping them with electrical pulses to excite the brain to improve certain functions like memory.

Neuralink plans to stick electrodes into brains using a robotic sewing-machine like device as described in a white paper (PDF) posted on bioRxiv on Wednesday. The surgical robot can insert six threads per minute, each with 32 electrodes, into the brain.

All the electrodes are fed into a device made up of 12 tiny millimeter-sized ASIC chips to create an array with 3,072 channels for the probes to connect to. These electrodes are distributed over 96 threads, so theoretically it should take the robot 16 minutes to implant a single "packed sensor device" inside your noggin.

The electrical signals carrying information about the brain's state are then amplified and transmitted to a computer, or maybe a robot arm, via a USB-C connector. The whole thing consumes 750mW of power and has a sampling rate of 18.6 kHz. 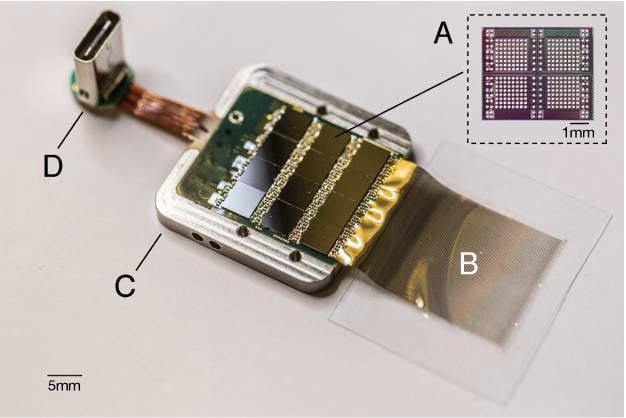 That doesn't sound so bad, right? Just 16 minutes of surgery and you'll have Musk's BMI stitched onto your brain. But whether these devices will be useful at all is anyone's guess.

There are multiple scientific and technical challenges, Pulkit Grover, an associate professor of biomedical engineering at Carnegie Mellon University, explained to The Register. "First of all, we don't know how many neurons need to be sampled or which parts of the brain we should probe," he said.

At the moment no one really sticks more than a few hundred electrodes in a brain at any one time in a clinical test. There are numerous challenges with extracting data smoothly when there are more and more electrodes.

"It becomes hard as the transfer rate of the data becomes very high, there is more cross-talk between channels that will affect the signal-to-noise ratio. All of this is done in settings of low area and low volume. These are non-trivial things," Grover said.

There's a trade-off in the design between extracting as much data as possible and making the device as safe as possible. Neuralink hopes to make the brain probes thin and flexible enough to wear for long periods of time. Each thread with 32 electrodes is about ranges from 5 to 50 micrometers - thinner than a strand of human hair - in various Neuralink designs.

Surprise! Wireless brain implants are not secure, and can be hijacked to kill you or steal thoughts

Andrew Hires, an assistant professor of neurobiology at the University of Southern California, told The Register that the thinner the material, the more resistance the wires have (because it will have fewer electrons to carry the current). The amplitude of the signals traveling from the electrode onto the chip will also attenuate.

The thinness also makes them more fragile and likely break, which is less than ideal. The brain actually moves a lot, when we move our heads or even when we sneeze. It's not clear how strong these electrodes are, as the paper doesn't say.

Although Hires believed it was "plausible" that such a device could record brain signals, it's another thing to decipher what the brain patterns really mean. Here's where the AI part that Musk talked about will come in handy. These signals could be fed as input for neural networks to analyze, so that they can pick up on the patterns of which neurons are excited when people are carrying out a particular task or feeling a particular emotion.

After learning this information, these BMIs should be able to do the reverse and stimulate certain areas in order to kickstart certain brain functions. "[Neuralink] hasn't shown any stimulation demos yet," Hires said.

That's the part that is arguably more difficult, Grover said. "What waveforms do you use to stimulate the brain? You['d] need to be a lot more careful, you can mess up the brain with stimulation. If you're changing brain connections permanently, then you have to be careful," he warned.

It'll be a long while before a Neuralink interface is stitched in to anyone's brain. "It will take a long time," Musk laughed. "And you'll see it coming so getting FDA approval for implantable devices of any kind is quite difficult and this will be a slow process where we'll gradually increase the issues that we solve until, ultimately, we can do a full brain-machine interface."

"This is not a mandatory thing. This is a thing that you can choose to have if you want. And I think this is going to be really important at civilization-level scale." ®