Guess who reserved their seat on the first Moon flight? My mum, that's who

Of course the ticket's real: it says 'Pan Am' at the top, doesn't it?

Something for the Weekend, Sir? My mother won a ticket to the Moon.

This is meant literally, not as a euphemism nor an idiomatic exaggeration. It was an actual, physical passenger ticket issued at the height of Apollo fever in 1969, officially valid and certifiable as genuine as such a thing could be, and my Mum owned it.

I was five years old when I first saw the Moon ticket for myself. On frequent occasions over subsequent years my mother would fish it out to prove to some disbelieving friend or another that it existed for real. Several further Moon landings later, however, the likelihood that NASA would open up commercial flights into space any time soon looked remoter than ever.

Even the organisation's shift in focus to (what seemed to us, at least) the passenger-friendly shuttle failed to arrest the rusting of the ticket's allure as a conversation topic. I think I last saw my mother show it off to someone in the early 1980s just before I left home for university. After that, it sunk into concertina filing wallet oblivion of family legend and eventually, like the ring of Sauron, it was forgotten.

When my mother died earlier this year, I was forced to examine box after box of her personal documents and photos, item by excruciating item. She was a lifelong hoarder of kitsch and kak, begads! And what did I find sandwiched among all those Tai Chi press cuttings, stocks and shares certificates and Beanie Baby catalogues?

Yup, here it was, leaping magically out of vague childhood memory into physical form like Powers Booth through the waterfall to my Charley Boorman: 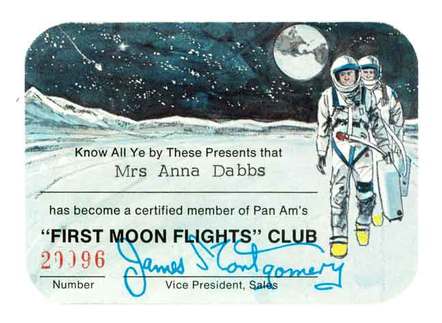 The first thing I realised when seeing the Moon-flight ticket with adult eyes for the first time is, as no doubt you have spotted already, it's not a travel ticket at all. It is a sequentially numbered membership card. Somehow my mother had managed to join an exclusive club of quite probably the rich, famous and influential who had been added to a waiting list to be among the first to enjoy one of the inaugural commercial passenger flights into space.

Being a ticket-holder of a proposed Moon flight is rare enough these days, probably limited to the Branson and Musk families and their business partners. But back in the 1960s, at the height of Apollo fever, when space exploration was funded and directed exclusively by USA and USSR governments, you can imagine those who had elbowed to the very front of the waiting list were Kennedys and Khrushchevs. Certainly not Dabbses.

A cursory glance at the back of the card reveals more of the story behind the club. 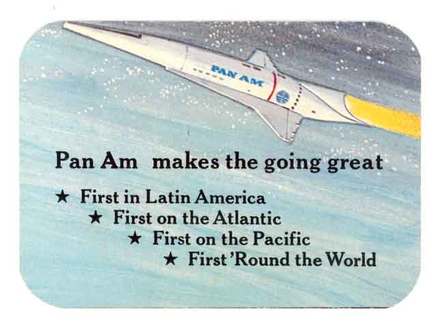 The exclusive waiting list, in which my mother stood at position number 20,096, was established not by NASA or the Космическая программа СССР but by the leading US airline of the era, Pan Am. And that space shuttle illustration looks familiar, doesn't it?

Stanley Kubrick chose during pre-production of his 1968 movie 2001: A Space Odyssey to borrow genuine aerospace engineers to conceive spacecraft designs that remained within the bounds of possibility rather than fantastical, at least to an increasingly sophisticated viewing public who were growing accustomed to pre-Moonshot Apollo missions. And in an extraordinarily prescient further decision, he offered these engineers' employers the reward of having their branding splashed unapologetically across 70mm celluloid.

Pan Am featured prominently in the middle section of the film, its distinctive shuttle waltzing its way towards the rolling space station to the throes of Johann Strauss Jr. The company clearly understood the value of such good PR and realised it would put them in with a good chance of being awarded the right to launch commercial space flights. Indeed, my mother's "ticket" is signed by Pan Am's VP for sales, James Montgomery, who later went on to be appointed chair of Pan Am worldwide.

So how the heck did my mum get such a valuable item in the first place?

Ludicrously, she won it in a competition at her local Odeon cinema in Maidstone, Kent, to promote the release of 2001: A Space Odyssey. In the following press cutting from the Kent Messenger archives, you can see her accepting the other top prizes. 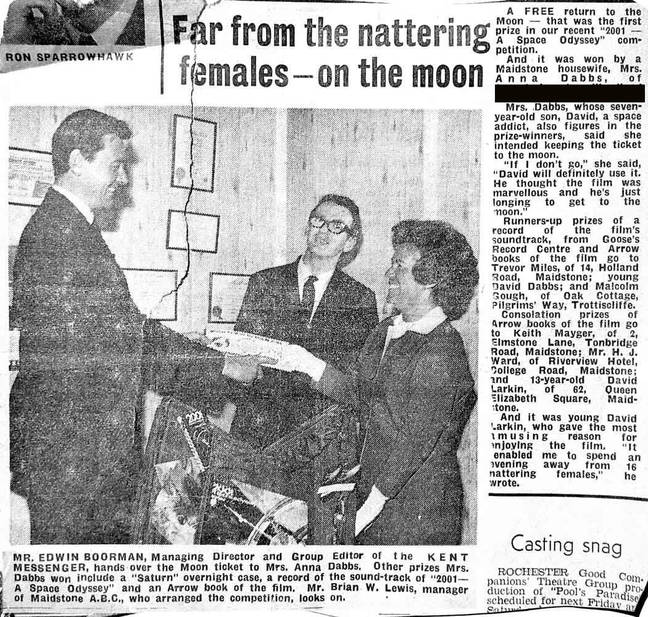 Apparently this type of headline was once considered to be amusing.

My middle brother David, the archetypal precocious seven-year-old smartarse, was a runner-up in the competition. I was too young to enter while my eldest brother, aged about nine at the time, was probably too preoccupied playing doctors and nurses with the neighbourhood girls.

It's probably fair to say that none of the surviving Kennedys in 1969 were munching popcorn alongside her in the faux-velvet pullmans, so surely the whole thing was more than a bit suspect. Surely she didn't fall for such an obvious con? Well, here's the follow-up letter from Pan Am's Mary Moore Mason (Matt's sister, perhaps?) confirming that "two return tickets to the Moon on the first Pan Am flight there" were on their way. 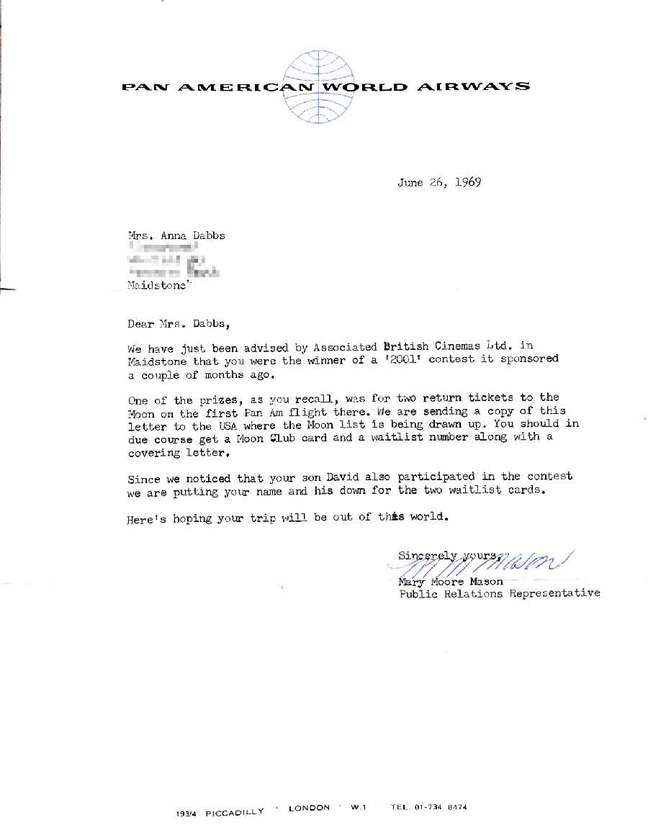 By the time the single ticket turned up in the post a few months later, this unbelievable offer had been beamed back a bit by a T.U. Gray (the surname's quite a giveaway) to a serial number on the Pan Am Moon flight waiting list. His letter suggests that the non-ticket doesn't even cover the fare. 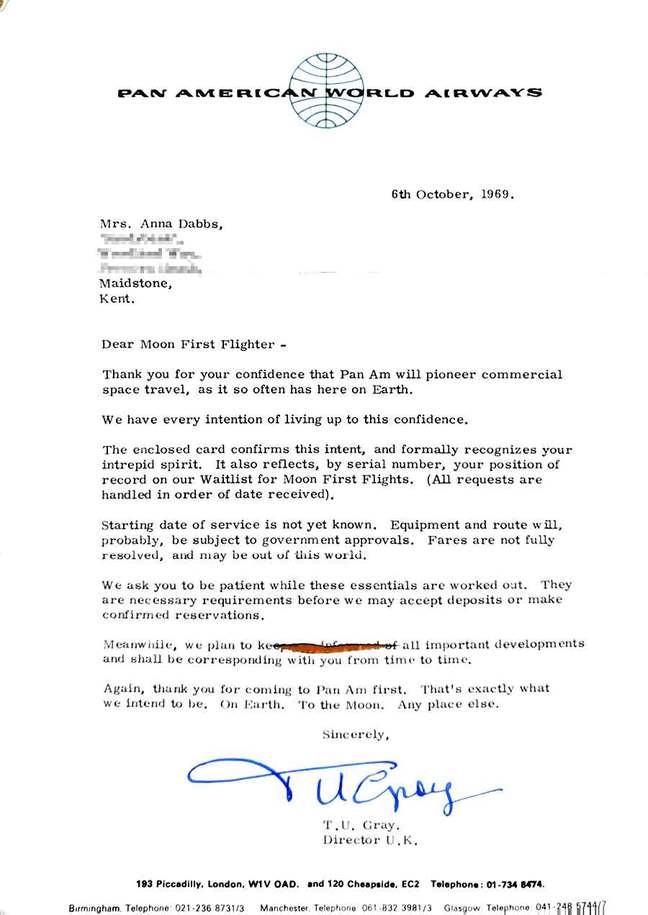 Clearly pissed off with not receiving the advertised prize that had subsequently been confirmed in writing by Pan Am's own PR rep, my mother fired off a letter to the airline and the cinema, demanding an explanation. If neither company failed to provide the ticket to the Moon that they had promised, she wrote, she was prepared to accept a cash alternative.

A tired Pan Am employee responded in January 1970 with an oh-go-away-you-gullible-pleb memo: 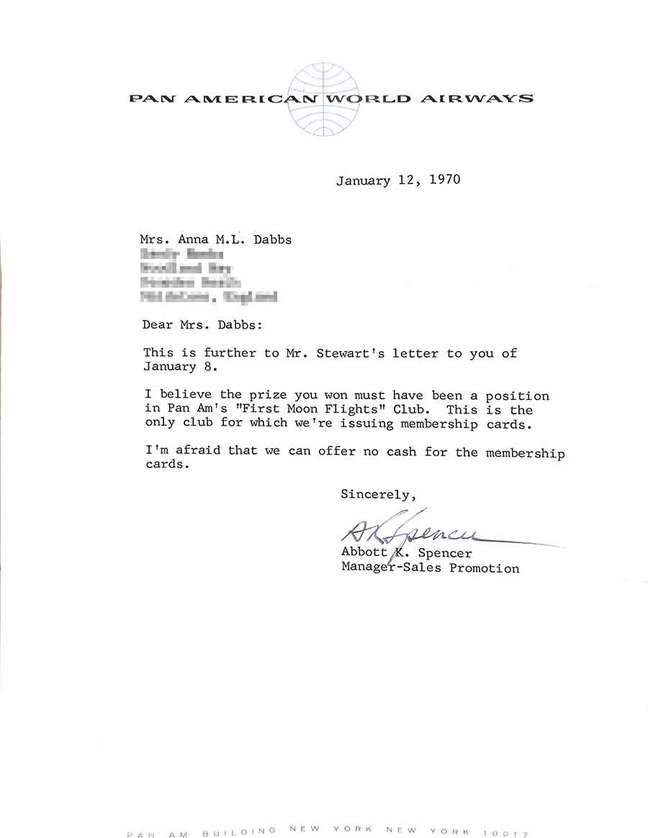 This was followed by a more expansive explanation from Ms Mason which, while contradicting her own letter from the previous summer, went some way to outlining how my mother ended up so far down the waiting list. So much for "the first Pan Am flight there" – unless a shuttle craft was being designed to seat 20,096 passengers. 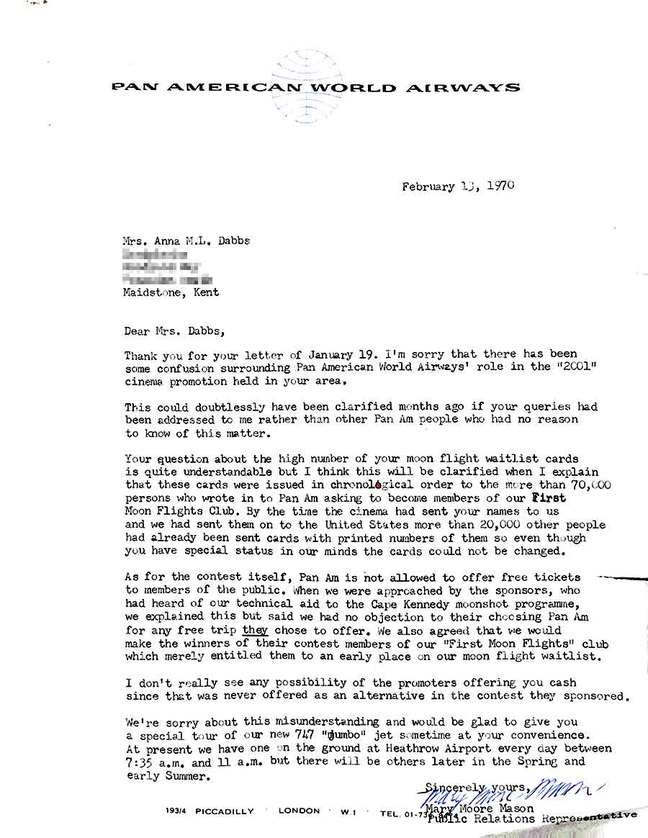 The manager of the Maidstone Odeon chipped in with evident relief that he wasn't expected to fund a Moon flight by selling more Butterkist and Kia-Ora. 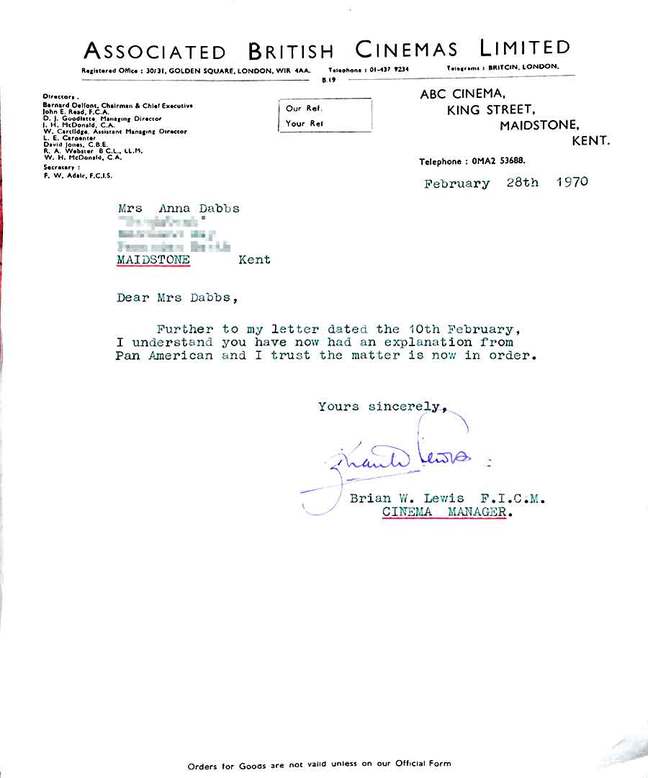 Mum was not going to take this lying down so called upon the full weight of national media's consumer champion of the day, Thelma Blickett (Miss), a leading light of the Daily Express when it was still a newspaper. Her opinion was essentially come-on-get-real-luv and she advised raising a civil complaint based on a faulty trade description. 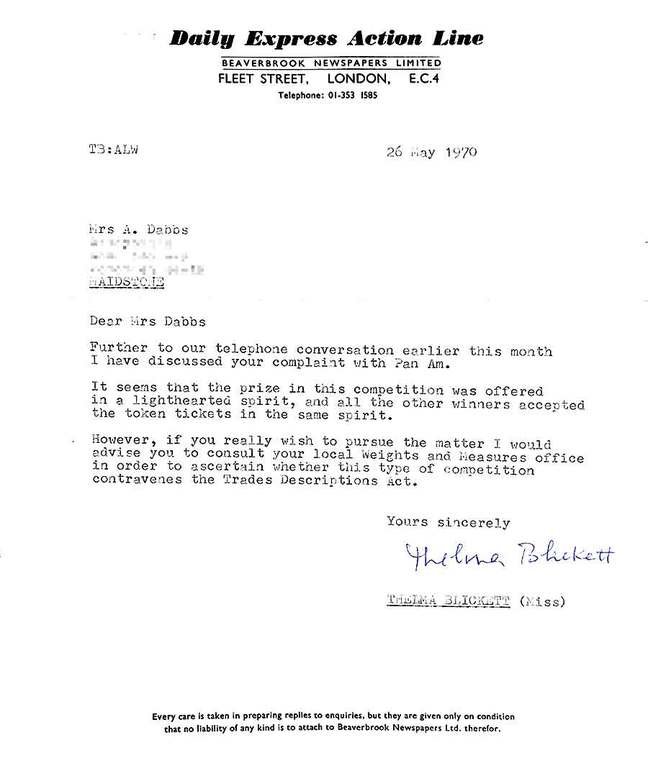 Here at the third stage, the story is suddenly jettisoned without so much as a fizzle. One could say it never really left the launchpad in the first place. My mother wisely chose not pursue Pan Am through the courts for a cash alternative to an impossible prize evidently offered in a "lighthearted spirit". Also, just weeks before Fleet Street's finest had written to my mother suggesting she abort her mission, Apollo 13's hair-raising close call in April 1970 had stripped all lightheartedness from the whole business.

So Mum settled upon basking in Mike, Buzz and Neil's glories from the previous summer, assuring everyone she had a genuine ticket to the Moon and very occasionally showing it off. She wasn't going to let reality ruin a good yarn – a trait I inherited, I suppose – and thus a family legend was born.

Now I need to establish whether her serial number in the waiting list is still valid.

Pan Am fell victim to an increasingly dissatisfied public dramatically withdrawing their custom after being spooked by the Lockerbie bombing. Coincidentally, the Howard Johnson restaurant group, another major brand sponsor of Kubrick's magnum opus, has also slid into anonymity since both companies' late-Sixties heyday. But could another spaceflight developer have inherited that inaugural Moon-flight waiting list?

I have written to Richard Branson and Elon Musk and await their response. If they don't get back to me soon, I am fully prepared to commission none less than Thelma Blickett (Miss) herself – last seen attending the Terry Wogan thanksgiving service at Westminster Abbey in 2016 – to take up my case.

I'll keep you updated if this particular eagle lands.

Alistair Dabbs is a freelance technology tart, juggling tech journalism, training and digital publishing. Observers muse whether Moon landings taking place in the current era would engender as much mystery and wonder as they did the 1960s and '70s. They reckon high-quality audio and HD video would make it seem "fake", all the more so if they actually caught some Selenites on camera. There's one in the eye for Meliès fans. @alidabbs