Some early adopters of the Raspberry Pi 4, released on 24 June, are running into heat issues, especially with the official Pi 4 case making no provision for a heatsink or fan.

The Raspberry Pi 4 has a 1.5GHz quad-core 64-bit Arm Cortex-A72 CPU, for approximately three times the performance of the previous model. That inevitably generates more heat.

The Pi does not have a heatsink, but uses what the company calls "heat-spreading technology" to use the entire board as a kind of heatsink. This worked fine for the Pi 3, but the official FAQ for Pi 4 notes:

The Raspberry Pi 4 Model B uses the same heat-spreading technology but due to the much more powerful CPU cores is capable of higher peak power consumption than a Model 3B+. Under a continuously heavy processor workload, the Model 4B is more likely to throttle than a Model 3B+.

You can add a heatsink if you wish, and this may prevent thermal throttling by keeping the chips below the throttling temperature.

When the Pi 4 heats up beyond 80°C (176°F), the CPU is throttled to reduce the temperature and a half-full red thermometer appears on the display, if one is connected. If the temperature goes up beyond 85, the GPU, which now supports dual monitors and 4K resolution, will be throttled as well. 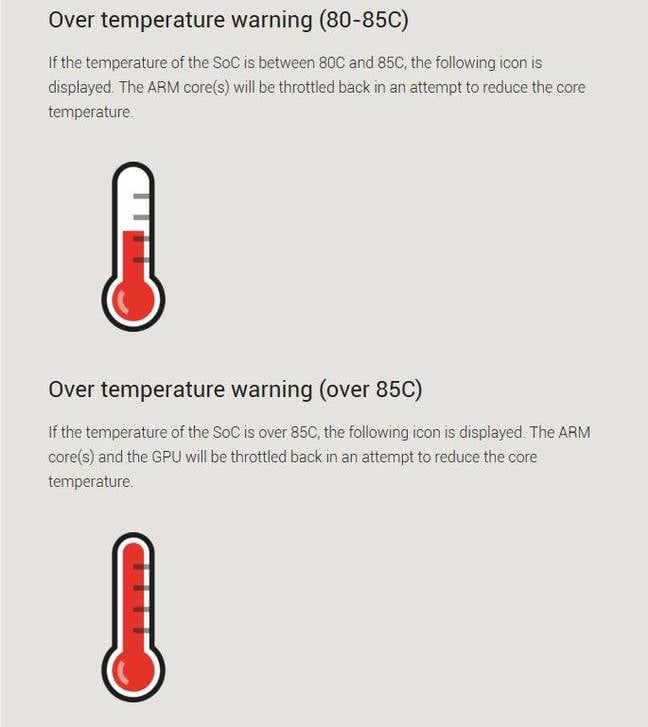 Warning signs of a Pi 4 heating up. If you see this, it is throttling back performance.

It is no surprise that the Pi 4 gets hotter than its predecessor, it is marketed as a viable general-purpose PC, after all.

There is an issue though: if it frequently overheats in normal use, users are not getting full performance. Longevity of the components may also be affected. We advised in our original review that "things got quite warm" when using the Pi for a few days.

Software engineer Martin Rowan has looked in detail at Pi 4 temperatures and concluded that it is "too hot to use enclosed". One of his complaints is that the official case "remains a fan-less design. Sadly this doesn't work out well with the increased thermal load." According to his measurements: "Compared to the Pi 3, the new Raspberry Pi 4 is running 80 per cent hotter and more than 100 per cent hotter when the new 4K display support is enabled."

The Pi Foundation is working on updated firmware for the USB3 host controller, which reduces power consumption by around 300mW, said Rowan. But this makes little difference to the heat generated.

A long thread on the Raspberry Pi forums shows that temperature issues are widespread, casting doubt on the design to supply the Pi 4 without taking any extra steps to improve heat dissipation.

The Pi 4 is still great value, of course, but adding a heatsink or a fan looks to be a sensible idea, even for undemanding applications. Heatsinks are a neat and silent solution, but fans appear to be the most effective. One user said:

I had zero luck mucking with firmware and configs, but adding a fan makes a huge difference. I added silent fans to both my Pi 4's (2G & 4G) last week and the idle-ish temps dropped by 24°C and 28°C respectively. Now even under heavy load both top out just over 40°C over the past week. I've had heatsinks since day one but they didn't help much.

The Pi community of hackers and bodgers is ideally placed to find solutions so you will find 3D printable heatsinks, fan arrangements and alternative cases springing up everywhere. ®