Houston, we've had a legend: Boffin behind NASA Mission Control signs off for final time

Chris Kraft set the rules for Mercury, Gemini, Apollo and the Space Shuttle 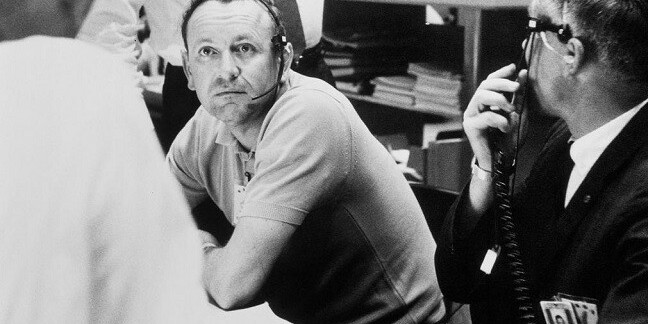 Born in Phoebus, Virginia, on 28 February 1924, Christopher Columbus Kraft joined the National Advisory Committee for Aeronautics (NACA) in 1945 following his graduation. Armed with a degree in Aeronautical Engineering, Kraft was a good fit for the organisation. Describing himself as "interested in stability and control", Kraft was assigned to the Flight Research Division.

In his book Flight: My Life in Mission Control, Kraft described his efforts in designing aircraft systems to alleviate the effects of turbulence and his work on the X-1 rocket plane. He was also instrumental in the grounding of the US Navy's F8U Crusader fleet after identifying a potentially fatal flaw in the design of the aircraft's wing.

Guess who reserved their seat on the first Moon flight? My mum, that's who

However, he became best known for his time at NASA.

The furore surrounding the 1957 flight of the Soviet Union's Sputnik satellite spurred US president Dwight D Eisenhower to sign the National Aeronautics and Space Act in 1958. This established the National Aeronautics and Space Administration (NASA) and absorbed NACA into the organisation. Kraft's NACA boss, Bob Gilruth, invited the young engineer to join him in the Space Task Group, a division of NASA focusing on human spaceflight.

Kraft said he "thought about it for at least a couple of hours" before signing up. In an interview in 2014, he explained his reasoning for joining: "I would be given an opportunity to lead, or to be a leader in that field, and I guess that's what I wanted." He would also be bringing with him a wealth of instrumentation experience and mission management ideas that would prove crucial in the creation of NASA's Mission Control.

Kraft's first task was to devise the mission plan for the Mercury flights, a challenge that required coming up with procedures, technology for capturing telemetry from the rocket and spacecraft, mission rules and tracking, as well as the flight plan itself.

Such was the complexity of the technology involved in keeping a human alive through all the phases of spaceflight that Kraft quickly broke the task down into separate roles, creating the concept of a Mission Control Center, where ground-based engineers could monitor data being fed back from the vehicle.

As the missions grew in complexity, so did the amount of data and the controllers and support engineers needed in the Mission Control Center. And, of course, at the head of Mission Control was the flight director: Chris Kraft.

Kraft would serve as flight director for all six crewed Mercury missions (sharing the task for the lengthy Mercury-Atlas 9 of Gordon Cooper) but it was John Glenn's Mercury-Atlas 6 that would prove to be a turning point for Kraft.

Glenn's flight was the first orbital by an American, but it encountered an anomaly toward the end of the mission. A sensor had indicated that the landing bag of the capsule had deployed, meaning that the heat shield could be loose.

Kraft and his controllers were convinced that the indicator was false (Glenn himself did not report the indicator or any of the knocking sounds one would expect if the heat shield was loose), but others within NASA, including the designer of the Mercury capsule, Max Faget, felt differently.

Kraft's objections were overruled and the retrorocket pack, which was strapped over the heat shield, was left on for re-entry – the thinking being that if the sensor was correct, the pack might hold the heat shield in place.

Of course, had there been sufficient unspent fuel left in the retrorockets, the resulting explosion would have destroyed the capsule.

Glenn returned safely to Earth and an inspection of the capsule proved Kraft correct. In his book Failure is not an Option, assistant Gene Kranz reckoned the event was a turning point for Kraft. The decision of the flight director would be final from then on.

Following the success of the Mercury programme, Kraft went on to head up mission operations, with a team of flight directors beneath him to manage the increasingly lengthy Gemini missions. He continued to serve as flight director for a number of the earlier flights, but eventually stepped back to focus on the upcoming Apollo programme.

Compared to the 350 to 400 people working on human spaceflight (as far as the government was concerned) when JFK announced the Moon was the goal, Apollo swelled to become a 400,000-person monster. In a 2008 interview Kraft said: "The magnitude difference there was indescribable. At that time it was indescribable."

Kraft had hoped to spend more time in the flight director role, but the Apollo 1 fire put paid to his plans; he would be spending his time dealing with the many managerial problems the huge programme was facing. And Kraft would be instrumental in the decision to send the second crewed Apollo capsule, Apollo 8, around the Moon.

While the Command and Service Module for Apollo had recovered following the Apollo 1 disaster ("it was now becoming a fine, good-looking piece of hardware," according to Kraft) the Saturn V was an altogether different matter: "We flew the second flight, and it was a disaster. I want to emphasize that. It was a disaster."

It was therefore all the more impressive that Kraft and his team were able to put together the December 1968 mission that saw Apollo 8 not just slung around the Moon and back, but put into orbit.

Kraft continued to be involved in Apollo, eventually succeeding Bob Gilruth as director of the Manned Spacecraft Center in 1972 and working on the Space Shuttle programme as well as post-Apollo projects such as Skylab. He eventually stepped down in 1982 after the first few flights of NASA's new space truck.

Kraft was a Shuttle believer, contradicting mutterings that the hoped-for 40 flights per year of the orbiters was "just a salesman pitch" in retrospect. In a 2012 interview, Kraft stated bluntly: "I'm here to tell you that's bullshit because I worked my fanny off to try to do it."

He went on to chair the controversial "Kraft Report" (PDF), published in 1995, which advocated less NASA oversight into the Shuttle and an overhauling of "the bureaucracy that has developed over the program's lifetime" with a view to making the operation of the vehicle more cost-effective. The report observed: "With over 65 successful launches, operations have become quite reliable."

NASA leaders accepted the advice of the Kraft Report, a decision criticised by the Columbia Accident Investigation Board (PDF) after the second Space Shuttle was lost. Even at the time, NASA's own Aerospace Safety Advisory Panel worried that "the assumption [in the Kraft Report] that the Space Shuttle systems are now 'mature' smacks of a complacency which may lead to serious mishaps".

Following his retirement, Kraft consulted for Rockwell International and IBM, and wrote his book.

He leaves behind wife Betty Anne, née Turnbull, who he married in 1950, and their two children, Gordon and Kristi-Anne. ®