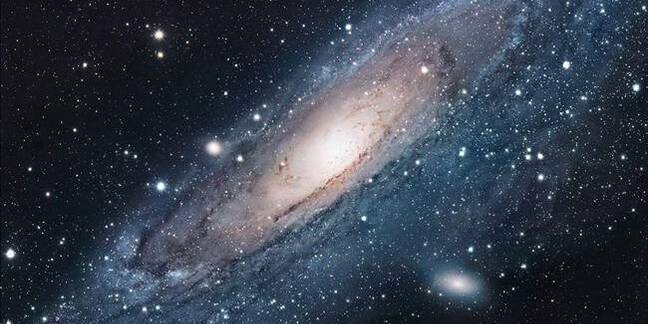 Cold killer ... The Milky Way casually strolling through its neighborhood this morning

The Milky Way was formed after it engulfed a dwarf galaxy known as Gaia-Enceledus 10 billion years ago, astroboffins have suggested.

The very idea is discussed in a paper, published in Nature Astronomy on Monday, that describes our galaxy’s violent past.

The Milky Way began as a blob of stars roughly 13 billion years ago. Elsewhere, at the same time, Gaia-Enceladus, a dwarf galaxy, was quietly unfolding, too.

The two bodies eventually met and smashed into one another. Since the Milky Way was the larger of the two, Gaia-Enceladus ended up being devoured. The cosmic super-prang jostled stars in both galaxies, and pushed at least some of them to the outer edges of the Milky Way, which is known as the stellar halo.

Meanwhile, gas from the dwarf galaxy settled into the disk of the ancient Milky Way, and provided fresh material to churn out new stars like our Sun.

For this latest study, scientists wanted to work out how long ago the collision with Gaia-Enceladus happened and how it affected the Milky Way's shape and growth. To do this, they studied the age of a bunch of stars in a 13,000-light-years-wide sphere, with the Sun at the center, using the European Space Agency’s Gaia spacecraft to record their position and brightness.

These stars, located in the galaxy's outer halo, were sorted into two groups: those colored blue, and those colored red. It was believed these colors would indicate the stars' ages. However, the boffins determined the stars were pretty much all the same age, and the color revealed their origin. The stars that were red were said to be metal-rich, and formed in a massive galaxy like the Milky Way. The blue ones were formed in a smaller, non-metal-rich galaxy, like Gaia-Enceladus.

So, essentially, the mix of blue and red stars suggested the Milky Way and Gaia-Enceladus combined at some point.

“We have analyzed, and compared with theoretical models, the distribution of colours and magnitudes – brightnesses – of the stars in the Milky Way, splitting them into several components; the so-called stellar halo, a spherical structure which surrounds spiral galaxies, and the thick disc, stars forming the disc of our Galaxy, but occupying a certain height range,” said Carme Gallart, first author of the paper and a researcher at the Institute of Astrophysics of the Canary Islands (IAC), Spain.

What's the fate of our Solar System? Boffins peer into giant crystal ball – ah, no, wait, that's our Sun in 10bn years

“The final piece of the puzzle was given by the quantity of 'metals' – elements which are not hydrogen or helium – in the stars of one component or the other,” explained Tomás Ruiz Lara, coauthor of the paper and a researcher at IAC. “The stars in the blue component have a smaller quantity of metals than those of the red component.”

“Until now all the cosmological predictions and observations of distant spiral galaxies similar to the Milky Way indicate that this violent phase of merging between smaller structures was very frequent,” added Matteo Monelli, a researcher at the IAC and a coauthor of the study.

The Milky Way’s next merger event is expected to be with Andromeda, another giant spiral galaxy similar in mass. Andromeda is about 2.5 million light years away, but is moving towards us at a 250,000 miles per hour. But don’t panic: the collision isn’t expected for another 4.5 billion years. ®