Darkest Dungeon: Lovecraftian PTSD simulator will cause your own mask to slip

Try to claim your birthright from eldritch horrors, but don't get attached to anyone

The RPG Greetings, traveller, and welcome back to The Register Plays Games, our monthly gaming column. This month was sunny Christmas, better known as the Steam summer sale and, gosh, was it a doozy picking out some bargains. But we settled on a title known to us for some time and finally took the plunge... all the while watching our hardware lurch and swelter in this unnatural heat.

Heroes in fantasy literature can too often be square-jawed paragons of virtue, crushing evil wherever it dwells and immune to the horrors they endure. The obvious exception is Frodo Baggins from JRR Tolkien's The Lord Of The Rings, which chronicled his descent into darkness and madness with every step towards Mount Doom.

That the most unlikely of characters could save the world is perhaps the greatest single reason for pop culture's reverence of LOTR as a fantasy watershed. Yet Frodo's comrades – Aragorn, Gandalf and so on – are still archetypal heroes, angelic beings impervious to temptation who could slay a thousand orcs without breaking a sweat.

A contemporary of Tolkien took a very different approach. HP Lovecraft was unappreciated in his lifetime and died in poverty, having only been published in pulp magazines of the early 20th century. But he was hugely prolific and, like Tolkien, created a world of his own, more accurately an interconnected mythos. He pioneered the "cosmic horror" genre, neatly summed up by his iconic opening to The Call of Cthulhu:

The most merciful thing in the world, I think, is the inability of the human mind to correlate all its contents. We live on a placid island of ignorance in the midst of black seas of infinity, and it was not meant that we should voyage far. The sciences, each straining in its own direction, have hitherto harmed us little; but some day the piecing together of dissociated knowledge will open up such terrifying vistas of reality, and of our frightful position therein, that we shall either go mad from the revelation or flee from the light into the peace and safety of a new dark age.

Lovecraft's legacy – insanity in the face of phenomena beyond our comprehension – continues to echo about literature, film and music, even gaming, yet until recently madness, anxiety, stress and the mental cost of adventuring has been rarely explored by the latter as a core mechanic.

Within moments of Darkest Dungeon's intro, the spectacularly voice-acted narrator has already uttered such marvellous words as "tenebrous" and "antediluvian" – so Lovecraft's magniloquent influence is immediately obvious.

As the player, you are positioned as a scion of a noble family who has inherited a crumbling estate from a relative into all sorts of decadence. In pursuit of an ancient and unnameable power rumoured to be hidden in the dungeons and catacombs below his manor, your ancestor dug too deep and unleashed eldritch horrors upon the land. He tasks you with cleansing the labyrinth to claim your birthright by training and equipping a surly band of adventurers... and eventually sending them to their doom. 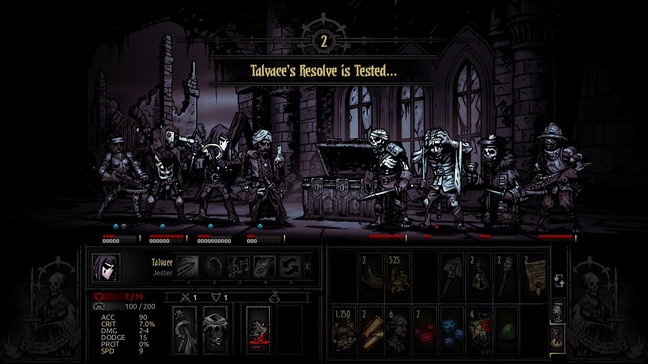 Because, believe me, they will die. The first game by indie studio Red Hook, released 2016 after a stint in crowdfunding and Steam Early Access, can be described as "roguelike", a genre derived from the 1980 Unix ASCII dungeon crawler Rogue. The "Berlin Interpretation", as fans call it, decrees that a roguelike game does not have to be merely "like Rogue", but there are a number of cues it can take to qualify. These include procedurally generated environments, permadeath, being turn-based and tile-based, resource management, dungeon crawling, and enough complexity for there to be more than one approach to a task. 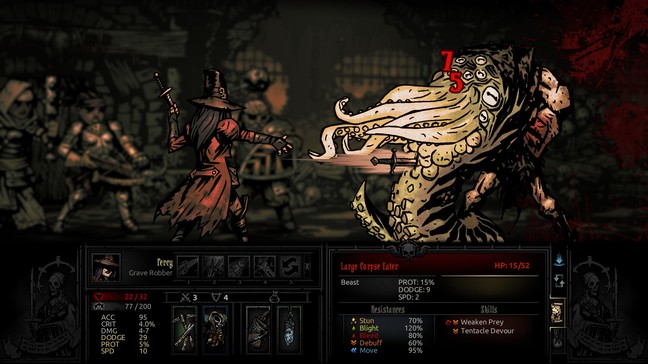 The animation and art style are superlative

Darkest Dungeon has all this and more. Once characters die, they are gone forever. So permadeath is only true for the individual, and while it may seem like a mercy that the player does not lose all their progress, a character's death leaves a gaping hole in your roster where you had invested hours training and arming them. There is a class system, too – 15 ranging from knights and lepers to highway men and priestesses – and different combinations work wonders together. So if a healer fails to make it out alive and another hasn't rolled into town to replace them, you will have to find a way to work around it. 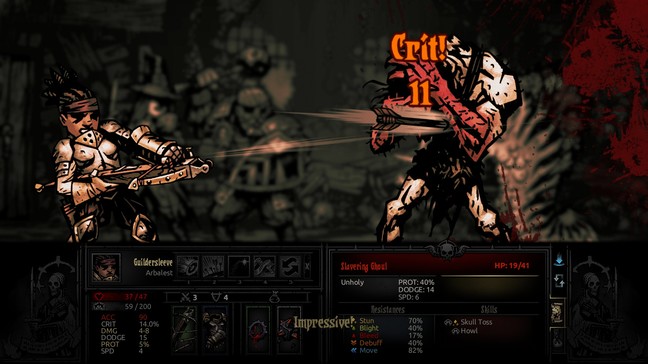 Physical wounds doled out by the resident monstrosities are not even the most pressing concern. The psychological wounds suffered from facing such horrors run much deeper, and each character in reality has two pools of health that must be managed. The enemies can inflict "stress", causing the characters' lower bar to tick up. Once it is filled the first time, that warrior will be struck with a madness that affects how they react to each situation. You can feel your grip on the dungeon start to slip as multiple party members lose their minds. When it fills up a second time, they will suffer a heart attack and perish. 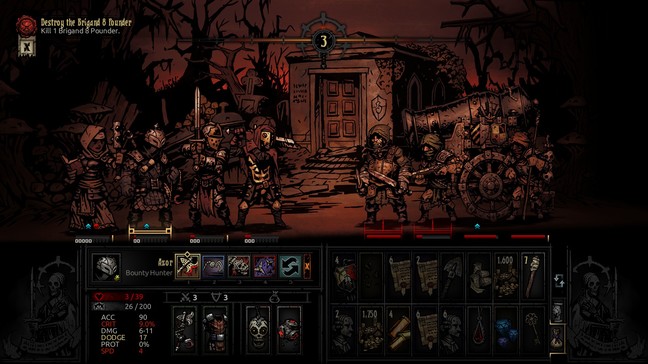 A boss fight with a massive cannon

These ordeals all take place on a very old-school tile-based lattice of rooms and corridors. Once the player has chosen a dungeon, one that suits the skills of the selected warriors (they scream in terror if you threaten to send them on something too difficult), a top-down representation is displayed in the bottom right, which is used to pick out a route. Dungeons have their own completion requirements with the easier being "Explore 90 per cent of rooms" or "Win 100 per cent of room battles". As dungeons are conquered, that area of the game will become more difficult when you return for your next sortie, unlocking boss fights. Gradually, and I do mean very gradually, your hardened survivors will reach a level where they can take a run at the titular Darkest Dungeon, the endgame zone. With an ample 21 hours' playtime, I am not yet in a position to do so. 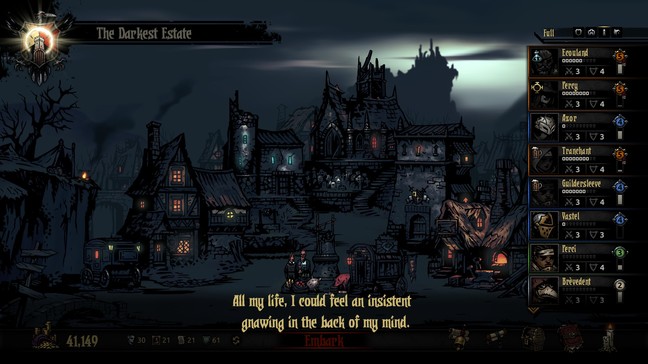 And it is bloody dark in there, which doesn't help the creeping threat of insanity. Gameplay takes place in 2D with a unique woodcut-meets-medieval-manuscript art style. Movement through the corridors is in real time, letting you stop to search for loot (though not every pickup has benefits), until you are attacked and combat becomes turn-based in the vein of countless Japanese RPGs. Though as you trek, your torchlight will wither and increase the stress on characters, meaning a generous supply is a must-have on any excursion below. Food will be needed too, lest your warriors begin to starve halfway through the journey. Camping unlocks certain abilities that can soothe your party's anxieties momentarily and dish out some helpful buffs for the battles ahead. 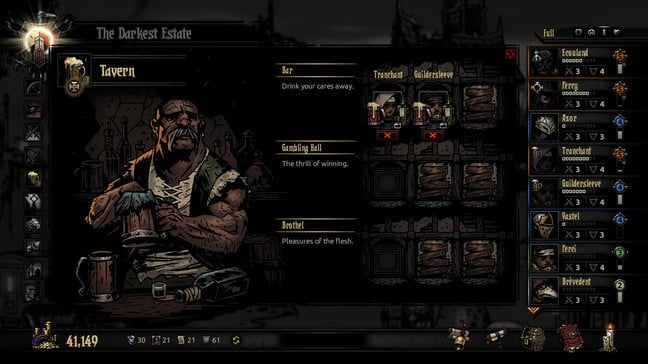 Pub o'clock for these poor dregs

Those fortunate enough to survive the abyss will return to the town hub stronger, but likely stricken with maladies of body and mind. Here, you can send them to the cloister for meditation, prayer or self-flagellation – all of which reduce stress, apparently. Alternatively, some will prefer the vices of the tavern. An infirmary will also treat disease, but note that any warrior indisposed by such activities will be unable to join the next adventure. The town is also where heroes can be recruited and buildings upgraded to improve your party's abilities and defences.

Darkest Dungeon's less-is-more approach really works. The seamless meeting of new and old will appeal to greybeards and the beautiful design and addictive nature will keep hardcore RPG fans coming back. There are possibly a hundred hours to slog through – and some downloadable content – so it's one to open up every now and again to see whether RNGesus smiles upon you, rather than trying to push to the end. But the fact that it can remain fresh for an hour or two each evening and be played entirely with the mouse hand on PC, leaving the other free for a pipe or cold beer, makes Darkest Dungeon the perfect game for these balmy summer evenings of Sun dodging. ®

The narrator is an incredible fixture of the game, reacting to and commenting on your actions as you play. He's astonishingly well-written so here are a few fine snippets of his dialogue:

"Our family name, once so well regarded, is now barely whispered aloud by decent folk."

"There is method in the wild corruption here. It bears a form both wretched and malevolent."

"The thing is more terrible than I can describe – an incoherent jumble of organ, sinew and bone."

"Do not ruminate on this fleeting failure – the campaign is long, and victory will come."

"A denizen of unconscionable alienage."

"Huddled together, furtive and vulnerable. Rats in a maze."

"Cruel machinations spring to life with a singular purpose!"