Bit of a time-saver: LibreOffice emits 6.3 with new features, loading and UI boosts

The Document Foundation has made some tweaks to improve file loading and save times in its word processor and spreadsheet programs in the latest version of LibreOffice, 6.3.

The open-source office suite for Windows, macOS and Linux – which consists of a word processor, spreadsheet, presentation graphics, diagramming tool and database manager – began in 2011 as a fork of Oracle's OpenOffice (now Apache OpenOffice). The origins of the project go right back to the '80s, when it was a commercial office suite called Star Office.

The foundation now comes up with a major new release around every six months. The previous version, 6.2, was released in February 2019.

This release fixes the security issue whereby documents could auto-run arbitrary system commands automatically on opening, thanks to a component called LibreLogo and its interaction with Python. LibreLogo, intended for teaching programming, is still included by default on Windows, even though most users have no use for it. 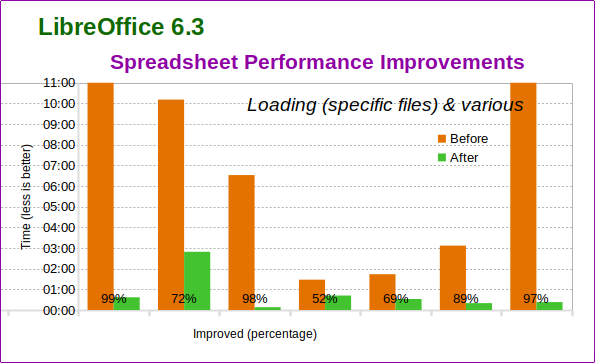 Document load and save is improved in Writer and Calc, sometimes dramatically

The most notable improvement in 6.3 is with load/save performance in Writer and Calc. The team focused on documents known to be slow, identified the reasons and fixed them. Examples are large documents, documents with many bookmarks and tables, and Calc files which make extensive use of VLOOKUP functions.

Scanning documents now works in 64-bit LibreOffice on Windows, thanks to a re-implementation of the TWAIN module.

A new redaction feature in Writer, Calc and Impress works by exporting the document to LibreOffice Draw. In Draw, a Redaction Toolbar lets you draw rectangles over the sensitive bits, before exporting the result as a PDF. It works, though it remains confusing that the Redaction Toolbar has buttons both for Redacted Export and Export directly as PDF. If you choose the latter, the redaction is only cosmetic, as this is intended for reviewing the redaction with colleagues. Labelling this "Unredacted PDF" might have been safer, especially as mistakes in this area can be costly. 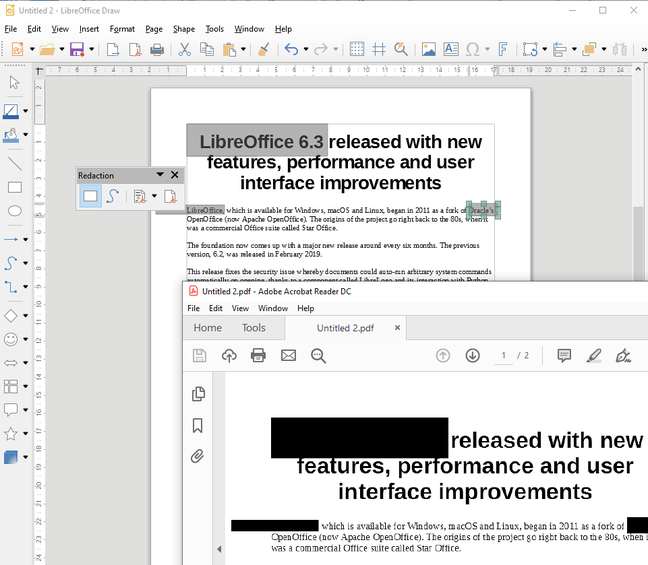 The LibreOffice team has been working on the user interface, and there are now a bewildering number of options for menus and toolbars. You can select Standard Toolbar, Single Toolbar, Sidebar, Tabbed, Tabbed Compact, Groupedbar Compact, and Contextual Single. You can also combine various options, such as choosing Tabbed UI, which is reminiscent of the Microsoft Office ribbon toolbar, and then adding the traditional dropdown menubar on top.

Interoperability with Microsoft Office formats is improved, and you can now export document templates (.dotx and .xltx), import and export PowerPoint SmartArt, and import charts which use Word DrawingML.

A FOURIER function has been added to Calc.

The full list of changes in this version is here.

LibreOffice plays an important role in providing a high-quality office suite for Linux and as an alternative to Microsoft Office. There are now also browser-based options, including Google's G Suite, but if you prefer the freedom of working locally with open source software, LibreOffice is for you.

The suite does lack polish in comparison with Microsoft Office. For example, there are font-kerning issues on occasion, though these are less evident when printed, and if you resize the application on Windows, the repainting of the window is less smooth and you can see black rectangles flash on the screen. Considering the budget available to Microsoft versus that for the community-driven LibreOffice team, this is not surprising.

These are small points though when you consider the rich features on offer, and version 6.3 has some small but worthwhile enhancements. ®