Ubuntu's support is based on the ZFS on Linux project, which itself is based on code ported from OpenSolaris, Sun's open-source operating system. It is licensed under Sun's Common Development and Distribution License (CDDL).

Ubuntu Eoan (19.10, due in October) will ship with ZFS on Linux 0.8.1. Features include data integrity checks, built-in RAID, vast capacity thanks to being 128-bit, built-in encryption, deduplication and copy-on-write cloning, built-in compression, and efficient checkpoints which let you snapshot a storage pool and recover it later. There is also TRIM support for SSDs.

Ubuntu already supports ZFS for use with the LXD container hypervisor. Eoan adds ZFS on root as an experimental installer option for Ubuntu desktop, with extensible layout in anticipation of server support later. ZFS on root means that ZFS becomes the core file system for booting the system.

Ubuntu Eoan will have ZFS support in the GRUB menu, including an option to revert the file system based on ZFS snapshots. 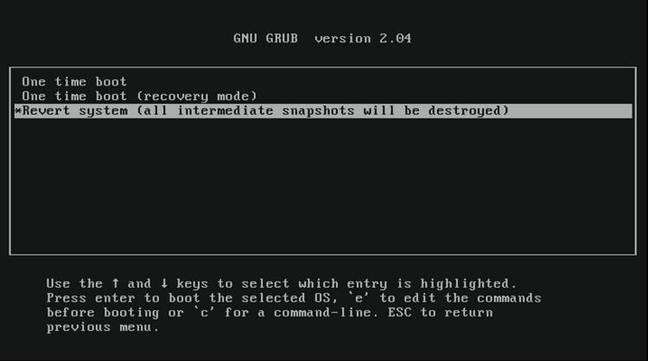 ZFS is widely admired but downsides include high resource requirements and complexity of configuration. Canonical is aiming to make ZFS easier to manage while preserving the ability to fine-tune it manually. To this end, the team has created a new daemon called zsys, which integrates with GRUB and assists with managing complex ZFS layouts.

The support for ZFS on root is experimental and the announcement emphasises: "We don't want to encourage people to use it on production systems yet, or at least, not without regular backups."

There are different opinions about the compatibility of CDDL with the General Public License version 2 (GPLv2) used for Linux. In 2016, Canonical's legal team concluded that it was permissible to distribute ZFS as a self-contained kernel module. The Software Freedom Conservancy, a nonprofit that promotes open-source software, disagreed, stating: "CDDLv1 is incompatible with GPLv2, so distribution of binaries is not permitted."

The group believes Oracle could "instantly resolve the situation" by relicensing OpenSolaris under GPLv2. The ZFS On Linux team, meanwhile, argue that the licensing issue "prevents us from distributing ZFS on Linux as part of the kernel binary. However, there is nothing in either license that prevents distributing it in the form of a binary module or in the form of source code."

If ZFS on Ubuntu does become more mainstream, licence uncertainty could hinder its adoption. ®