One person's harmless japery can be another's night of LaserJet Lego 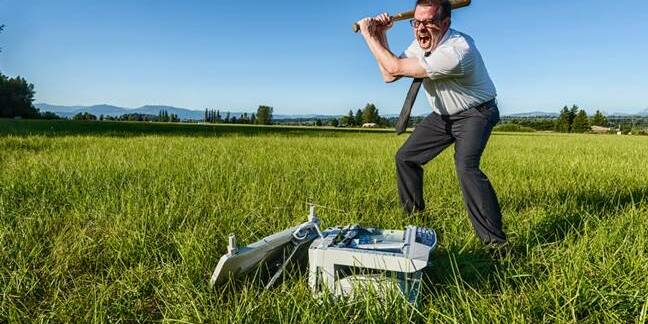 Who, Me? Welcome to Who, Me?, The Register's weekly column of confessions from the darker corners of our readers' memories.

We'll call today's confessor of misdeeds "Al", whose story takes us back to the more hopeful days of the early 2000s – more hopeful compared to a world that has left satirists throwing up their hands in despair.

Al's story is a classic tale of why techies with time on their hands can be a hazard to innocent users.

"HP," Al told us, "used to run their classic B&W office laser printers with a small two-line LCD display with a command-line interface without any sort of authentication over the network."

Such innocent, carefree times. When SMB1 was all the rage and Donald Trump was the host of something called The Apprentice.

While perusing the documentation for the office printer, Al found himself in a section concerning the commands the thing would accept over the network. Al realised that with a few simple commands delivered through the magic of a connected terminal session, he could throw up all manner of text.

Armed with this knowledge, Al "immediately proceeded with some 'harmless' shenanigans before I left for the day".

Did he put a naughty word on the display? Something to amuse a passerby ,like "I wish I was a Canon"?

No, Al did something properly evil.

"I changed the 'READY' message on the department's main printer to 'CLEAR JAM'."

Unfortunately, the printer had a bit of a reputation for eating paper (unbeknownst to Al), which meant there was a real danger that a conscientious user, perhaps one checking that all was OK before starting a print job, might get caught out.

There are, after all, a few considerate individuals in the world who will put in more A4 when the thing runs out.

"A sales exec," said Al, without much in the way of remorse (in our opinion), "staying late to print out some handouts for a presentation next morning, decided to check the printer for issues first, before attempting to print to it."

We can only imagine the lengths the user went to, and the level of dismantling that occurred, to clear the bogus message.

Looking at the variety of HP documentation available, we reckon Al's deed was achieved through use of the company's Printer Job Language (PJL) and judicious application of @PJL RDYMSG DISPLAY = "CLEAR JAM".

As for Al himself? "I got an entirely justified bollocking for my little stunt the next day."

But did he stop? Er, not quite. Visitors to the printer in the following days and weeks found themselves faced with messages such as "INSERT COIN" as Al continued to tinker with PJL.

But no user would ever try and shove a pound coin into the openings of a LaserJet. Would they?

Ever driven a co-worker to take a hammer to an innocent piece of hardware? Discovered a neat trick that was considerably less than a treat? Of course you have, and the Who, Me? confessional awaits. ®

Stob Wherein Verity is troubled by a curious spam