400MHz ought to be enough for anyone?

The problem is not new. A May 2018 thread on Microsoft's community forum discussed the issue, with devices reportedly slowing to a mere 0.4GHz. However, a recent Surface Pro 6 firmware update may have made things worse.

CPU throttling is a technique for preventing overheating from damaging components and is not a bad thing in itself. However, some users report that it happens for no apparent reason. Further, throttling down to 0.4GHz is extreme and makes the devices almost unusable.

"I have a two-week old Surface Pro 6 i5 with this problem and I have no idea what is triggering the throttle locking. It seems to happen at random times, sometimes during a game, sometimes I'll just be browsing the internet with only Edge open," said a Reddit user. 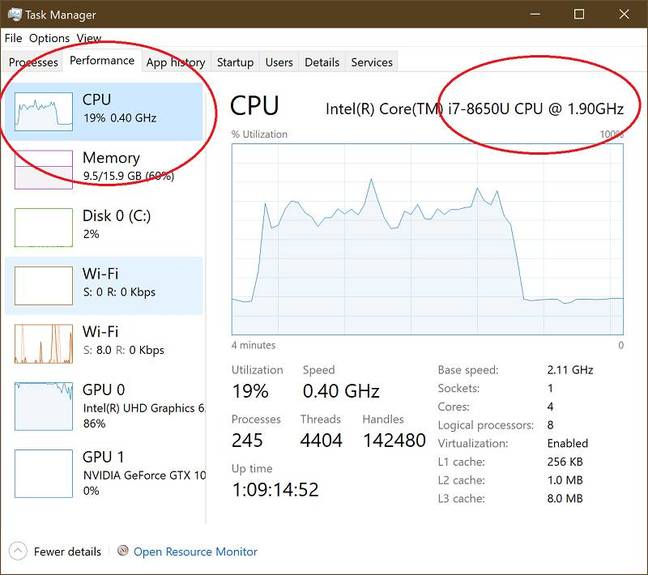 This Surface Book 2 has a base frequency of 1.9GHz, and a max frequency of 4.20GHz, but here it is dawdling at 400MHz

The issue is most likely caused by a CPU feature called BD PROCHOT, which stands for bi-directional PROCHOT. This enables other devices on a motherboard to instruct the CPU to slow down, even if the CPU itself is not overheating.

Which device is sending this signal unnecessarily on affected Surface models is not clear. Some users have addressed the problem with a utility that disabled BD PROCHOT, though there are always risks in disabling features that are designed to protect hardware.

Microsoft has said it is working on a further firmware update to address the issue, but the fact that it is longstanding may also imply that it's not an easy fix.

The slowdown does not affect all devices, and assessing how many are is difficult. Judging by the number of complaints, it is a minority.

Microsoft released the first Surface tablet in October 2012. There was a hope that with control over both software and hardware, Microsoft could make the Surface both better optimised and more reliable than third-party Windows PCs, but in practice there have been plenty of glitches that have spoiled the Surface experience over the years.

That said, the Surface range has played a positive role in encouraging design innovation in the PC market, and helping to prevent a race to the bottom by marrying Windows software with premium hardware. ®