Is the platform's abuse policy unfair to genuine developers?

Developer Patrick Godeau has claimed his business is under threat after his Google Play Publisher account was terminated without a specific reason given.

Godeau, from France, provides apps for iOS and Android via his company Tokata.

It is a small business but Godeau said in his complaint that he has achieved "millions of downloads", most via the Play Store.

On 31 July, Godeau received an email stating that "your Google Play Publisher account has been terminated". He appealed and was told that "we're unable to reinstate your developer account". The reason given was not specific, just that it was "due to multiple violations of the Developer Program Policies".

Godeau has been a mobile developer since 2011. He believes his problems may stem from the fact that his first application was copied and a cracked version circulated by pirates, leading him to develop custom anti-piracy techniques including "dynamic bytecode loading from a local app resource". This triggered an alert in the F-Secure antivirus app for Android, but he was able to report this as a false positive and get the warning removed.

In July 2018, Google removed another of his applications specifying "device and network abuse". He never discovered what the issue was. Maybe he was using the YouTube API wrongly? "Having read though the API terms of service, I couldn't deduce how my app infringed them," he said. However, he was able to publish a new version.

The new issue is not so easily resolved. First one of his apps was suspended for what the Play team said is "malicious behaviour". Shortly after, his entire account was terminated complete with the advice "please do not attempt to register a new developer account". 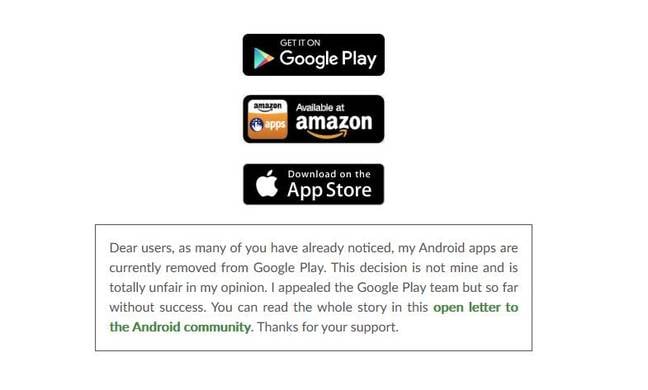 The apps remain available on the Apple and Amazon app stores.

Godeau said he has no objection to Google's efforts to remove malicious apps from the Play Store. His frustration is that he has not been told any specifics about what is wrong with his apps, and that there is no meaningful dialogue with the Play team or appeal against a decision that directly impacts his ability to make a living from software development.

"It seems that I'm not the only one in this situation," he wrote. "Many Android developers have seen their apps removed and their accounts abruptly terminated by the Google Play bots, often for minor and unintentional reasons, or even for no known reason at all, and almost always without any opportunity to prove their good faith, receiving no other response than automatic messages."

This kind of incident is apparently not uncommon. Another company, Guidebook, which develops apps for events, has also had its apps removed, leaving users taking to Twitter to ask where they are. Guidebook's Twitter support says "we're actively working with Google to rectify this." 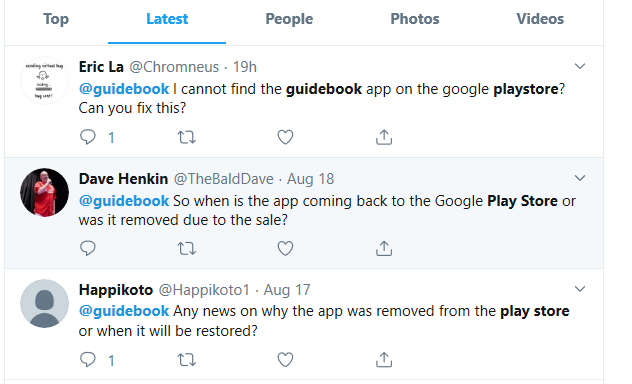 Another common complaint is that Google does too little to remove pirated or copycat applications from the Play Store, causing potential reputational problems for developers whose customers may get an ad-laden copy instead of the real thing, or simply loss of business to the pirates.

Google therefore has a difficulty in that for every complaint from a bona fide developer that they have been unreasonably banned, there will be others complaining about pirated or malicious apps that have not been banned. The scale of the operation means reliance on automated processes is to some extent inevitable, though whether Google has the right balance between AI and human intervention is a matter for debate.

The imbalance of power between a tech giant like Google and individuals or small companies that depend on it for their business means there is a case for regulation to ensure fairness, though tuning this to help genuine businesses without weakening the company's ability to remove badly behaved apps would be challenging.

The Register has asked Google for comment on Godeau's case. ®