Samsung Note10+ torn apart to expose three 5G antennas: One has to pick up something 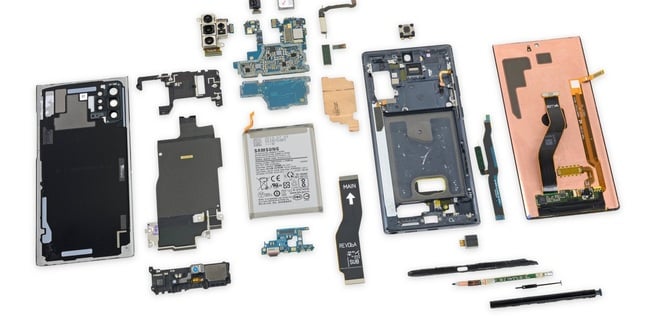 Samsung's latest and greatest Note10+ smartphone has been prodded and probed by the teardown twiddlers at iFixit. The verdict isn't great: repairing it could be worse but it could also be a whole lot better too.

It also contains a prodigious amount of glue.

After extracting the S Pen from the case, the iFixit gang resorted to Dr Heat and Mr Pick to pry off the ever so fragile back cover and defeat the adhesive holding the phone together. Inside they found the first changes from previous incarnations – the motherboard is now solely at the top of the device, allowing for a wider battery pack.

Again glued in place, the powerpack is a 16.56Wh unit, up from the 15.4Wh of the Note9 and larger and heavier too.

While Samsung has dumped the microphone jack, the Note10+ can still take a microSD card in the same tray as the SIM. Something the company has jettisoned from the smaller Note10 because, hey, who needs expandability anyway?

Beyond the SIM tray lies the motherboard, with the Note10+'s array of five cameras: 16MP ultra-wide, 12MP wide angle, 12MP telephoto, a 10MP selfie cam and that Depth Vision sensor. However, most interesting is the Qualcomm QTM052 mmWave antenna module for the 5G that smartphone makers desperately hope will kick-start another wave of upgrades. In the way that a four-figure price tag probably won't.

iFixit acidly observed that while super-fast download speeds are possible, long distances and, er, walls can trouble the technology.

The Apple-esque stacked motherboard features the promised chippery – 12GB RAM on top of a Snapdragon 855 SoC and that all-important Qualcomm X50 5G modem. Pulling out the boards revealed a soldered-on USB-C port on a daughterboard as well as two additional mmWave antennas for 5G on each side of the phone.

That makes a total of three 5G antennas. At least one must pick up something, right?

Sadly for those dreaming of a Microsoft phone after seeing the amount of stage time Samsung gave the Windows giant during its Unpacked event, there is no sign of anything to hint at a relationship that might be anything other than software-deep.

Of course, the question is: can it be fixed?

The gang were happy to see equally sized Phillips fasteners throughout and despite the headphone jack being gone, easily broken components like the USB-C port were relatively modular.

However, changing that battery would present a challenge thanks to all the glue to keep the thing in place. And worst of all, every repair has to begin with a heart-stopping removal of the fragile glass rear.

So look after that shiny new toy – replacing the screen sounds like a bad day for all concerned. ®