Got a burning desire for a Hololens 2.0? Microsoft insists its math coprocessor won't be too hot for headgear

Ow, ow, my forehead is on fire

Hot Chips Now your humble Reg vulture is back from the Hot Chips conference in Silicon Valley, it seems right to briefly run this Microsoft development by you all.

During the symposium, the Windows 10 giant teased a few new details about its custom math coprocessor inside its Hololens 2.0 augmented reality headsets. This silicon takes care of accelerating algorithms needed to work out where the wearer is looking, what's going on around them, and so on.

The chip, dubbed the Holographic Processing Unit 2.0, or HPU 2.0, is not a small die at 79mm2, Elene Terry, who works with Microsoft’s silicon and system architecture team, warned. Instead of trying to cram as much processing power as possible into a smaller size, the larger design ensures the chip allows enough heat to escape to avoid thermally overloading. Since the HPU 2.0 is positioned over the forehead between the eyes, in the techno-goggles, it would be pretty uncomfortable if got too hot.

It maxes out at one trillion operations per second of programmable compute with its own custom instruction set. This ISA spans hundreds of instructions that are rather CISC-y: a single instruction can perform dozens of operations in one clock cycle. The thing is clocked at 500MHz for compute.

Below are some slides from Microsoft's presentation: click on any to enlarge them. 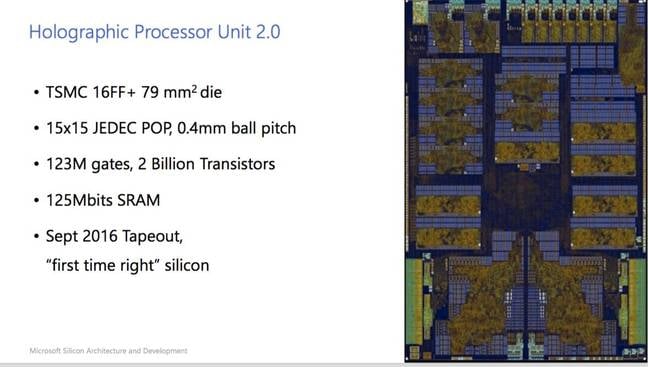 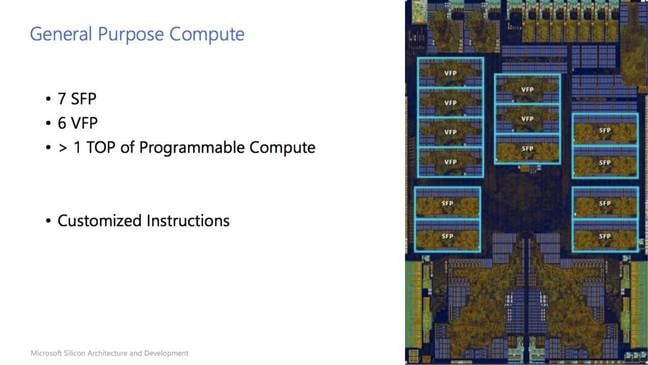 Images from the depth-sensing camera, and data from head-tracking and eye-tracking sensors, are fed straight into the HPU. A separate application processor, a general-purpose CPU that sits at the back of the device, runs software that produces the scene to show in the augmented display, with the HPU and twin display controllers rendering the final graphics. The CPU and HPU are linked via PCIe running at about 100MB/s. 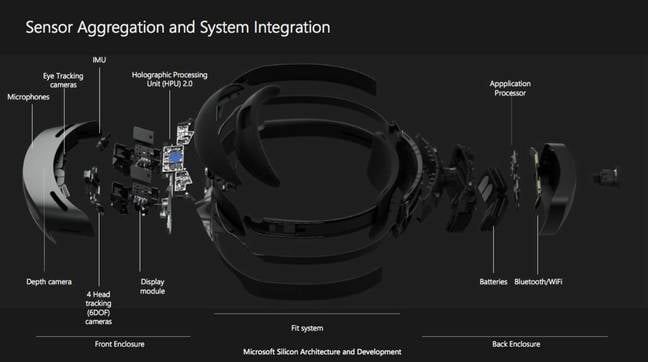 The main components in a Hololens 2.0 headset.

The second version of the HPU covers a wider point of view and can handle 1.7 times more compute than the previous generation. There are also new features such as eye tracking, hand tracking, and 3D audio support, too.

Microsoft announced the Hololens 2.0 in February this year, and there’s a version promised for developers too, tho no release date has been announced for either gadget yet. ®