Release the GIMP: Glimpse project founded to avoid branding that some find offensive 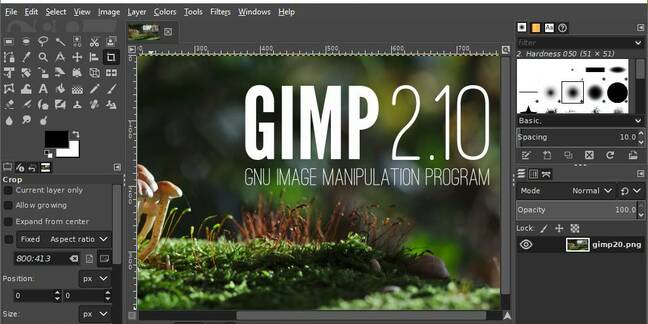 GIMP is capable open source software, but is the name a barrier to adoption?

Interview Glimpse is a fork of the popular open source image editor, GIMP, created primarily to offer the software under an alternative name.

The new fork springs from a discussion on Gitlab, where the source code is hosted. The discussion has been hidden but is available on web archives here. A topic titled "Consider renaming GIMP to a less offensive name," opened by developer Christopher Davis, stated:

I'd like to propose renaming GIMP, due to the baggage behind the name. The most modern and often used version of the word "gimp" is an ableist insult. This is also the colloquial usage of the word. In addition to the pain of the definition, there's also the marketability issue. Acronyms are difficult to remember, and they end up pronounced instead of read as their parts. "GIMP" does not give a hint towards the function of the app, and it's hard to market something that's either used as an insult or a sex reference.

The proposal was supported by another developer, Leonora Tindall, who noted that "I have, on two occasions now, recommended this program to photography and graphic design educators (as an alternative to Photoshop) who told me that they considered it and found it good as software but weren't permitted by their institution to use it in the classroom because of the name."

Others opined that changing the name of long-established software would hurt its recognition and usage. The discussion became bad-tempered and caught the attention of Bobby Moss, whose day job is a technical writer at Oracle.

"I'm a long-standing user of the project," he told The Reg. "I saw the abuse and unpleasant things being said to Chris. It was decidedly not cool and not how we should make decisions in free software. I also thought the arguments he made were well reasoned, not focused so much on the offensiveness of the name but on the marketability of the application."

Moss therefore forked the project into a new one called Glimpse.

"Initially I thought it was just going to be a quirky project on my own private GitHub but people expressed enthusiasm for it. It's evolved now into this new thing where you’ve got multiple people running it, myself, Chris who originally posted the issue, and another woman called Clipsey … it's all kind of ballooned out from there."

The subject of the suitability of the name is not new, and is enshrined in the official FAQ:

"I don't like the name GIMP. Will you change it?"

With all due respect, no. We’ve been using the name GIMP for more than 20 years and it's widely known … on top of that, we feel that in the long run, sterilization of language will do more harm than good. … Finally, if you still have strong feelings about the name "GIMP", you should feel free to promote the use of the long form GNU Image Manipulation Program or maintain your own releases of the software under a different name.

The Glimpse project is therefore entirely within the spirit of open source. "We believe free software should be accessible to everyone, and in this case a re-brand is both a desirable and very straightforward fix that could attract a whole new generation of users and contributors," says the About page.

The team wish to continue using the upstream GIMP project libraries and are asking for donations to GIMP as well as Glimpse.

The developers are planning more than just a name change, including a "front-end UI rewrite" according to an update posted a week ago. The team is looking at screenshots of existing image editing application user interfaces to inform design mockups. There is also a discussion about language choices. Rust with GTK (Gnome Toolkit) bindings, perhaps? C++ and Qt?

Changing the user interface is more challenging than changing the name. We wonder if it is all a little too much to take on?

It is "a long-term plan, maybe a few years down the road," says Moss. "It's something people are looking at in parallel. The main focus at the moment is just tracking the upstream releases, and making changes to them. When we hit GNU image manipulation program version 3, they'll have completed their port to GTK 3, and that's where we are looking to do a hard fork and can start getting more ambitious with user interface changes.

"A lot of the functionality is actually in a set of libraries. Those components would still be used and any changes we made to them would be contributed back.

"Even if our project falls flat on its face, at least we've brought new people and new interest to a code base that's been out for a while and probably needs a bit more love from the community than it currently enjoys." ®

'We understand the concerns' says Dropbox (not enough to change how it works, though)

Meet the new Dropbox: It's like the old Dropbox, but more expensive, and not everyone's thrilled

Dropbox reinvents itself as a collaborative workspace – no, not the WeWork kind (phew)

Dropbox to let Google reach inside it and rummage about

Create and store GDocs in Dropbox, with admin policies preserved

Write once, run anywhere? You must be joking

Dropbox CEO: I will make your worklife a calmer experience

Analysis By hiding most of the emails you get