Huawei claims, albeit without evidence, the US government has tried to break into its internal computer networks.

The mobile tech giant is also pretty upset about Uncle Sam's ongoing patent theft probes, claiming they are little more than an excuse for American officials to pry into its business.

On Tuesday, the Chinese telecommunications equipment giant emitted a statement blasting the US government for interfering in its operations for political purposes. It also denounced Portuguese inventor Rui Pedro Oliveira's patent infringement claim against Huawei, regarding camera technology as "false," which the Middle Kingdom mobe maker says is designed to "take advantage of the current geopolitical situation."

The statement comes with a list of grievances and accusations from Huawei, including allegations that the government has at least attempted to hack Huawei's networks.

"For the past several months, the US government has been leveraging its political and diplomatic influence to lobby other governments to ban Huawei equipment," Huawei huffed. "Furthermore, it has been using every tool at its disposal – including both judicial and administrative powers, as well as a host of other unscrupulous means – to disrupt the normal business operations of Huawei and its partners."

With news of the investigations now public, Huawei is wasting no time giving its side of the story, claiming that while they did meet Oliveira, Huawei's US branch had no interest in his camera technology and the product it developed a few years later, the EnVizion360 camera, was substantially different to Oliveira's design.

"Huawei categorically rejects Mr. Oliveira's claims of patent infringement, and has provided detailed documents in support of its stance (see visual comparisons of the two products below as example)," the firm declared. 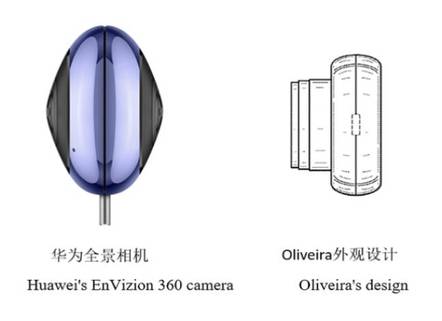 "Nevertheless, Mr Oliveira proceeded to feed a false narrative to the media in an attempt to tarnish Huawei's reputation. He made further efforts to exert pressure on Huawei through senior government officials, trying to make the company cede to his demands and hand over large sums of money."

As for Uncle Sam, Huawei says the government is seizing upon the patent claim to further interfere in its business and harass its workers.

We're not going Huawei even if you ban our 5G kit, Chinese firm tells UK

Among the allegations is that the Feds illegally searched and detained its employees, have at least attempted to snoop on Huawei's internal networks, and have sent officers to "threaten, menace, coerce, entice, and incite both current and former Huawei employees to turn against the company and work for them."

"For the past several months, the US government has been leveraging its political and diplomatic influence to lobby other governments to ban Huawei equipment," Huawei says.

"Furthermore, it has been using every tool at its disposal – including both judicial and administrative powers, as well as a host of other unscrupulous means – to disrupt the normal business operations of Huawei and its partners."

The Justice Department, for its part, is opting to say little on Huawei's allegations.

"As a general matter, we do not confirm or acknowledge the existence of investigations," a department spokesperson told The Register.

"In all matters, our investigative techniques comply with the law and all subjects of investigations enjoy the same rights to due process afforded by our Constitution and safeguarded by an independent judiciary." ®