NavyX is set to kick off its latest industrial challenge, named the Maritime Autonomous Systems competition. Top of its agenda is finding "solutions that demonstrate the capability to autonomously move valuable loads, from ship to ship, ship to shore and shore to ship, with minimal operator input".

Loading warships with missiles, ammunition and other stores is a process that hasn't changed a great deal since the 19th century. Ships pull alongside an ammunition jetty where cranes are then used to pick up required items and place them aboard, either directly into missile silos or onto the decks for sailors to pick up and stow elsewhere. 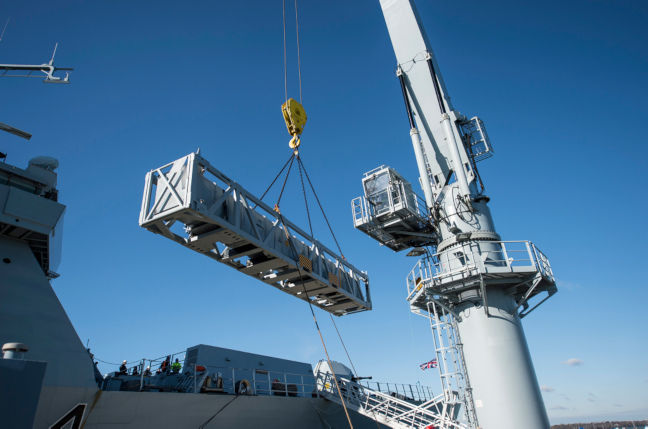 This is a time and resource-intensive operation that can take days while highly expensive and volatile munitions are gently moved, lifted and lowered into their required positions.

New aircraft carriers HMS Queen Elizabeth and HMS Prince of Wales feature automated weapons movement equipment that reduces the number of humans needed to shift munitions from storage magazines to the hangar and flight deck, ready to be loaded onto helicopters and fighter jets. The process of getting bombs, missiles and bullets aboard the ships in the first place, however, still relies on crane operators, lorry drivers and lots of people in hi-viz vests shouting over walkie-talkies.

Hence the RN wants to find out if all those well-paid people could be used for something other than lifting and shifting boxes and pallets. NavyX's latest competition aims to find out if anyone else has developed "mature technologies" that Her Majesty's finest can "rapidly develop and prove in an operational environment".

Companies with equipment and tech that has a reasonable chance of making this work will be given access to "testing and trialling facilities", though the actual funding for any R&D and trial work is yet to be confirmed.

NavyX is the RN's "Autonomy and Lethality Accelerator", copying the civilian tech industry's methods for getting modern equipment and innovations aboard RN warships and into the hands of the Royal Marines. In total, the project has £75m to spend on new tech. ®