Swedish distillery Mackmyra has released a whisky infused with the goodness of AI. Keen to reinforce workplace stereotypes, The Register went to check it out.

We first noted Microsoft's foray into the world of whisky blending back in May, when early results of Redmond and Mackmyra's efforts were sampled. The distillery has since filled 5,000 bottles with the AI-created tipple. Enough for even the thirstiest editorial office, surely?

Mackmyra was founded in Sweden in 1999 and takes its name from the location of the its first distillery, which was set up following a whisky-fuelled skiing trip. Rather than having a romantic Scottish connection, the name, according to CEO Magnus Dandanell, can be translated roughly to "Damp Mosquito".

In the interest of full disclosure, we tottered along at the invitation of Microsoft and Mackmyra. We were shown the Bodås mine where the company stores the casks of whisky from which its blends are made and the second, larger, distillery where the magic happens. And, of course, we tried some of the stuff.

The mine itself is worthy of note. 50 metres down, the warehouse contains thousands of casks (in sizes from 200 to 30 litres) of whisky. Some go into Mackmyra's expensively limited edition blends while others belong to customers, awaiting the glorious day when the bottles may be filled. Dandanell told us that over the years the company had filled 19,000 private barrels.

However, it was the technology behind the AI blend that we were most interested in.

Putting the Artificial Intelligence into Intelligens

Angela D'Orazio, the wonderfully titled "Chief Nose Officer" and Master Blender at Mackmyra, is responsible for creating the company's recipes. With the contents of the mine affording a vast number of possible combinations, her job is further complicated by the fact that it takes a good few months for a blend to get to the point where it can even be tasted.

Keen to innovate, Mackmyra called in the boffins at Finnish outfit Fourkind to come up with a way of applying the new-fangled Machine Learning and Artificial Intelligence technology that seems to be all the rage to come up with some ideas.

It seems obvious, but when we spoke with some Scottish whisky enthusiasts, the idea of a whisky made from a recipe generated by an AI was greeted with horror.

D'Orazio was less concerned, regarding the AI as something to assist rather than replace the human factor in the creation process. Fourkind's Jarno Kartela, who led the project, agreed, telling us that the goal was to have D'Orazio say "Oh, that’s nice. I would have not thought about this myself..."

While Azure happened to be the platform on which the magic happened, other than the Azure Machine Learning Studio, little of Microsoft's cloudy AI was actually involved in the process. Kartela explained to us that much of the heavy lifting was done by reams of Python 3.7 code along with the ubiquitous open source scikit-learn tooling for mining and analysis.

With 75 recipes in the bank from Mackmyra made from that vast array of possible ingredients, the challenge for Kartela's algorithm was to define what constituted "good". The team took both customer and expert reviews for each recipe, stirred in Mackmyra's own assessment and award ratio and tipped that, along with the vast array of available casks, into a data lake.

That data, Kartela told us, as well as being a tad unstructured, also had to be encrypted because "if we were to lose that, that would be like, the end of the game."

A salutary warning to any company toying with the idea of feeding their business secrets into an AI.

As well as feeding that data into the algorithm, Kartela's code also had to avoid the scenario of simply spitting out the existing, known good recipes when selecting the amounts to be blended from the casks. A generative modelling process was used, with a starting step that could kick things off from a seeded recipe or a totally blank slate.

A discriminating process then scored the generated recipe based on weighted targets (for example, sales or reviews) and either logged it, or had the algorithm learn by looking at the correlations and try again.

Kartela had the thing iterate for "hundreds of millions of times" before eventually the top 20 whisky recipes were spat out in a human readable format. These were presented to the expert, D'Orazio, who discarded 15 based on factors such production challenges or simple cost, which left five possible recipes.

Aside from Azure Machine Learning Studio, the team didn't make much use of Microsoft's other cloudy AI capabilities. Instead, the code ran on GPU-enabled Azure VMs via Docker. You could certainly fire up similar machines on the likes of Google if Azure just isn't your thing.

Out of the five recipes selected, one – recipe 36 – made the cut. Mackmyra made 5,000 bottles of the stuff and named it "Intelligens". The batch allocated for Sweden has already sold out, but some can still be picked up from the company's online store if you have £59 burning a hole in your pocket. 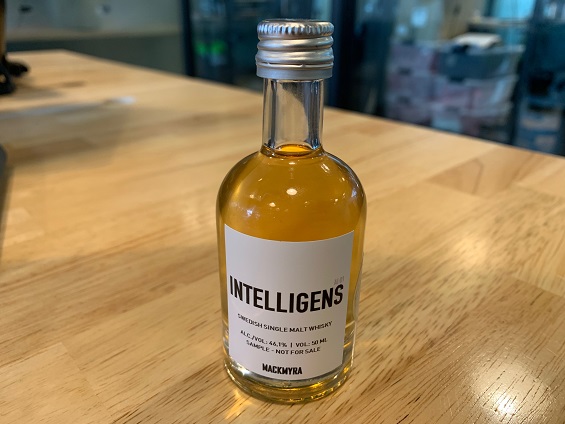 We sampled some during a visit to the company's distillery and can confirm that it is a pleasant enough tipple – smoky and balanced with a ghost of oak – if whisky is your thing. There is nothing in the flavour to indicate an infusion of Azure, which, to be honest, is no bad thing.

Kartela is keen to apply the lessons learned from the experience to other industries, such as confectionery or perfume. Master Blender D'Orazio, on the other hand, was delighted to be on hand to mentor the AI, observing that rather replacing humans, the code complemented her own skills.

We were given a 50ml sample of the magical AI whisky and, despite the best efforts of an airline that will remain nameless, managed to not chug it down on the way back to Blighty. "Intelligens" seems a tad too obvious to us, so perhaps The Register readership would care to suggest an alternative?

The suggestion that makes the usually taciturn hacks in Vulture Central laugh the hardest wins. We'll select a winner on Tuesday and pop the thing in the post to a UK address in time for next Friday. ®