Cloud, internet biz will take a Yellowhammer to the head in 'worst case' no-deal Brexit 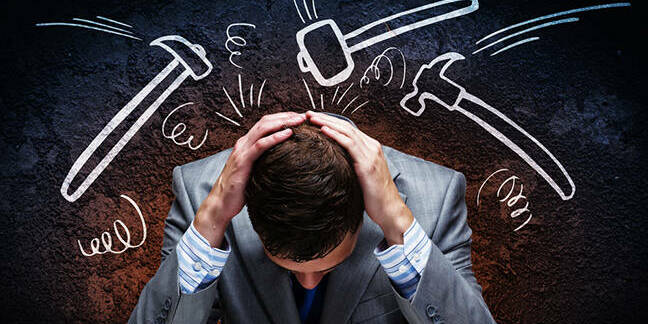 Analysis Cloud providers, social media platforms, and e-commerce companies are going to be hit hard in the event of a no-deal Brexit, according to official UK government correspondence.

Among dire warnings of medicine and food shortages, illegal fishing boats, and traffic chaos at ports, one bullet point in the dossier, drawn up by civil servants, addresses the issue of cross-border data transfers.

“The EU will not have made a data decision with regard to the UK before exit,” warns the Operation Yellowhammer team. “This will disrupt the flow of personal data from the EU where an alternative legal basis for transfer is not in place. In no deal, an adequacy assessment could take years.”

Those transfers of personal information between the UK and Europe happen constantly, every minute of the day, thanks to the modern computer and internet technology so a no-deal Brexit could, theoretically, grind everything to a halt. Simply put, it is claimed, a post-no-deal-Brexit UK will clash with Europe's strict data-protection rules.

That would be very bad news for cloud providers and for pretty much every technology company, all of which would have to consider whether to implement controls on the flow of personal data between the UK and Europe – and perhaps even the wider world, as we'll explain below.

Such controls would be unlikely to happen immediately, especially since it would be hard to put an effective UK/EU data barrier in place. However, if the UK government's Sir Humphreys are right, and a data-sharing agreement will “take years” to hammer out, it is likely that over time, and without a deal, efforts would have to be made to limit companies’ legal exposure if they wished to shift data in and out of UK.

Or, in other words, everything would stop running smoothly. As would also be the case when it comes to food, medicine, and pretty much everything else that travels into and out of Brexit Britain.

There is dangerous precedent when it comes to data transfers: the ongoing saga of data sharing across the Atlantic between America and Europe that previously took place under the Safe Harbor agreement. Its successor Privacy Shield nearly created havoc when Safe Harbor was ruled illegal following the Snowden revelations of US government spying.

The situation is still not fully resolved, and it was touch-and-go for a while, with only a massive outcry from business forcing politicians to develop temporary fudges in order to keep data traffic flowing. And that was with both sides desperate to find a quick solution. The UK and EU are not exactly on the best terms right now, and it would only take a smattering of pettiness on either side for data transfers to become a problem.

Of course the risk of information transfers being disrupted thanks to Brexit is not new: we highlighted back in March 2016 how it could become a massive headache.

Back then, internet governance expert Emily Taylor wrote a piece for London-based international affairs think tank Chatham House in which she warned that the combination of the Safe Harbor/Privacy Shield agreement between the EU and the United States, and the Snoopers' Charter being pushed through the British Parliament, "could see a ban on the transfer of data between the UK and EU, with a severe economic impact."

Put simply, the Snoopers' Charter does not meet the Privacy Shield requirements, leaving the UK in a double-bind: it would be breaking data-sharing agreements with both the EU and US at this rate with a no-deal Brexit. Both the UK and Europe have been studiously ignoring the legal implications of the Snoopers Charter while working through the Brexit mess, but that would become increasingly difficult to do if the UK was officially outside the European Union.

The UK would then also need to reach some kind of accommodation or agreement with the US to stop being cut off from technological services in America.

GDP-arrrrrrgggghhh! A no-deal Brexit: So what are you going to do with all that lovely data?

But of course this is all just Project Fear. The document is dated August 2, and Boris Johnson only became Prime Minister on July 24 so all the contents of the document are therefore tainted, written by Remoaners, and hence completely wrong. There is nothing confusing about this argument; it is watertight.

Besides, they are only talking about two days of delays at Dover. And the delays to medicines aren’t anywhere near as bad as some people said. And you don’t have to eat all kinds of food all the time, you can eat stuff out of cans, Blitz Spirit and all that. Besides, the Yellowhammer dossier says that electricity and water will be fine, so we have nothing to worry about.

And as for those illegal fishing boats: “Up to 282 EU and EEA nations fishing vessels could enter illegally, or already be fishing in UK waters on day one.” Ha! We are the nation of Nelson, we’ll just head down to Portsmouth harbor, scramble on board HMS Victory, fling off the ropes and show those bloody Frenchies what Trafalgar was all about.

Having trouble wrangling your data? It can probably automate that