Whoa, bot wars: As cybercrooks add more AI to their arsenal, the goodies will have to too 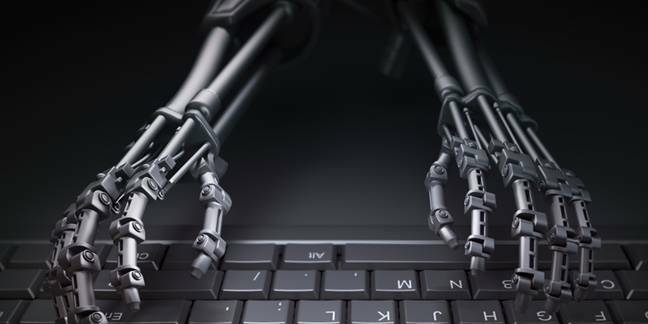 Infosec techies should prepare to both fend off AI attacks and welcome the technology into their armoury of tools, reckons Trend Micro's director of cybercrime research.

The security world is standing on the brink of an AI-powered arms race, claimed Rob McArdle at the firm's Cloudsec conference in London today.

Speaking on stage alongside Rik Ferguson, Trend's refreshingly British research veep, McArdle warned that "deepfake ransomware" was one potential attack vector of the near future.

Describing the technique, McArdle said an attacker could use deepfake tech to create a video with blackmail potential: the obvious use case is something involving nudity, or perhaps someone making outrageous statements. The attacker could then upload that video somewhere and send the mark a private link along with threats to publish the video widely unless large sums of money were paid immediately.

"It works against politicians and teenagers in particular," warned McArdle. "Politicians have the problem that even if it's found out to be fake, nobody fact-checks any more," referring to the infamously doctored video of American politician Nancy Pelosi, which was slowed down to make her seem drunk or unwell.

The technique is less likely to work against you or I, though: "My friends will say Bob drinks too much Guinness, his chest doesn't look like that."

No need to live on a remote mountain

Away from the misery of modern scammers targeting individuals, McArdle also waxed lyrical about how we could potentially end up in an AI-on-AI arms race. Building on one of Ferguson's points made earlier in their talk, about the rate at which machine learning tech improves over time, Trend's cybercrime research director said we could see techniques used to play Go reconfigured to help breach corporate networks – needing a similar escalation by human defenders.

"AI kind of brings two things," he told The Register after his on-stage talk. "It comes into play on the defensive side to deal with the scale of the attacks we're seeing today."

"Dealing with tens or hundreds of thousands of alerts per hour. Simply put, humans can't process that kind of data. On the defensive side we need AI to make smart decisions; not 'if packet bad, drop it'."

And it's not a case of buying some magical black box to make all the nasties go away: humans will still need to be in the loop, but with added information at their fingertips. Security operations centre inhabitants of the near future are "going to have to start trusting AI decisions" before they become overwhelmed.

"Even if it's triaging for them," said McArdle, "there's a point we're going to have to say we trust the algorithms to take action in these swathes of scenarios. They should be there to help those analysts [and] give them way more intelligence about the things that do bubble up."

Who will save us from deepfakes? Other AIs? Humans? What about vastly hyperintelligent pandimensional beings?

Lest we be disheartened by the idea of computers racing ahead of humans' ability to fend off deepfakes and ever more sophisticated attempts to compromise networks and extract ransoms, it's not all bad news. Deepfake tech is "still determinable" in McArdle's view: humans (and mice, as it happens) can still spot the subtle signs that a video isn't all that it seems, even if it's "harder for your ears to recognise a fake voice".

"It's very easy on the infosec side to talk about the doom and gloom but all these technologies bring with them some real positives," said McArdle after El Reg pondered whether taking up a new life as a Tibetan monk on a remote mountain top might be the ultimate defence against cybercrime. "At least in my mind it outweighs the things we use for negative purposes but those don't necessarily make as good news." ®