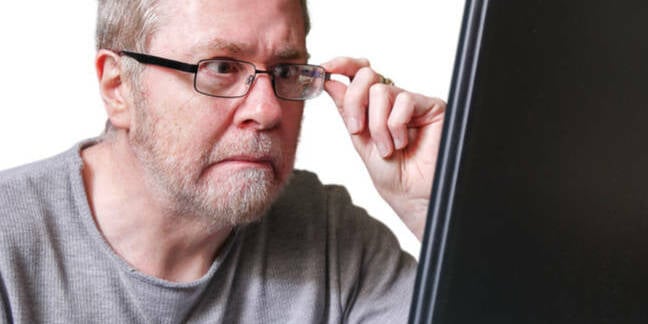 On Call As the weekend looms, spare a thought for those unfortunates forced to, you know, deal with actual users. Perhaps buy one a beer after spending a moment with our regular On Call column.

Today's tale, from a reader we'll call "Anthony", takes us back to the heady days of Britpop, the Spice Girls and Windows 95.

While the rest of Blighty was revelling in Cool Britannia, Anthony was toiling away in Glasgow for an engineering company that will remain nameless. It was, Anthony told us, staffed mainly by employees proud to declare that they "don't understand this computer stuff".

A perfect place on which to inflict Microsoft's (then) latest and greatest, no?

"We were fitting out a new department with Windows 95 PCs for the first time," Anthony told us, "and it was the morning of go-live."

The machines were hulking beige boxes, emblazoned with Compaq branding. A few lucky desktops were even equipped with CD-ROM drives. And, of course, all had the then-ubiquitous floppy drive.

It was shaping up to be a challenging day. "I was the floor walker," Anthony said. This meant he would be unable to hide behind a telephone or a ticketing system as users fired up their machines for the first time.

Windows 95 was quite the change from the Windows that had preceded it. Gone were the familiar environs of Program Manager, to be replaced by a Start button, taskbar and the glory of 3D Pinball (although we imagine that such fripperies as the Plus! pack were frowned upon).

Anthony was on hand to answer, in his words, "any question". How to actually log in to the computer, access email, find applications and so on. Pretty much anything computer-related that the users could come up with.

He was therefore in a confident mood when a user waved at him, needing help.

The gentleman in question, recalled Anthony, "seemed to be doing OK, but he said he had a question…"

"See that Recycle Bin there, on the screen?" the user asked.

"Does someone come round and empty that?"

Anthony stared at him for a few seconds before carefully demonstrating the arcane art of the right-click.

He then slowly backed away, doubtless making a mental note to have a quiet word with whoever had dispensed the training.

Thanks in part to his impressive skills with the mouse, Anthony eventually rose to the position of Network and Infrastructure Supervisor. These days he's an IT director and, we imagine, has any number of PFYs on hand to deal with the arduous task of right-clickery.

Ever had to explain just what all those pesky little pictures on the screen actually mean? You definitely have. And you should also definitely send an email to On Call to tell us all about it. ®