Just as Ecuador thought it had seen the back of leaks, over 20m citizen records are exposed

And Julian Assange is among them - but how old are these?

Records on more than 20 million individuals in Ecuador have leaked from an unsecured database in Miami, Florida, containing a mix of official citizen registration data and personal & banking details.

The data is reported to contain "a large amount of sensitive, personally identifiable information at the individual level", according to a research team at VPN comparison site vpnMentor, led by noted infosec bods Noam Rotem and Ran Locar.

Although the server appears to be owned by Ecuadorian consulting company Novaestrat, the leak is described as containing what look like Ecuadorian government entries, vehicle information from an automotive association and data relating to Ecuadorian national bank Bless (El Banco del Instituto Ecuatoriano de Seguridad Social).

Rotem and Locar's team found they could look up a random 10-digit number to emulate an Ecuador citizen national ID number, and obtain a personal record containing such information as name, date of birth, addresses, phone numbers, level of education, gender and marital status.

We were planning on making a joke along the lines of "What a shame the Ecuadorian government didn't have any in-house embassy staff on hand with experience in dealing with data leaks", but we were beaten to it by the oopsie itself. If you want to know what one of the leaked records looks like, here's part of Julian Assange's: 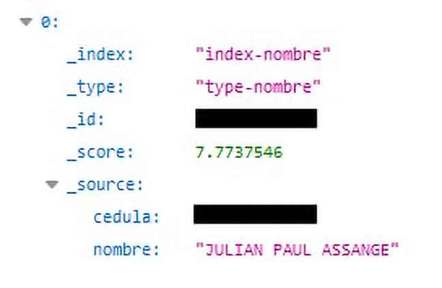 The Register is unable to contact Julian Assange and ask him what he thinks about this because he is currently a Category B prisoner at Her Majesty's Prison Belmarsh, London, until his extradition battle with the US gets started.

Another head-scratcher is how the 18GB database can leak records on 20 million Ecuador citizens when only 17.4m Ecuadorians actually exist. On this, vpnMentor is a little vague: "Some of the data seems to involve individuals who are already deceased."

This explanation hints that the data is several years out of date: at least, 15 per cent of Ecuadorians probably don't snuff it annually with no new blood to replace them. Another possibility is that the leaked data contains a large number of duplicates, although how many vpnMentor does not say.

Also unclear is whether or not the leaked records have been misused. "The highest profile data breaches in the last couple of years have been from misconfigured cloud storage," said Tim Erlin, VP, product management and strategy at Tripwire. "These are not generally targeted attacks, but opportunistic, and exposing data doesn't necessarily mean that it was compromised."

Hugo van den Toorn, manager offensive security at Outpost24, mused: "This is a typical example of a misconfigured system. It should have never been possible for anyone on the Internet, especially without authentication, to access the data stored in the database."

The hole was closed on 11 September. ®