Russian claims that the world's oldest-ever human on record actually had her identity stolen by her daughter have been trashed by a paper published today in The Journals of Gerontology.

Jeanne Calment was already a minor national treasure in her native France when she passed away in Arles in 1997 at the age of 122 and 165 days. French TV news had been featuring her birthday for at least a decade before the end, noting her penchant for a daily cigarette and glass of wine.

Last December, however, gerontologist Valeri Novosselov and mathematician Nikolai Zak upset Gallic national pride with a bizarre explanation for Calment's apparent longevity. Snippets of their findings were leaked onto social media for several weeks until the publication of the full report on Research Gate – where papers are not academically peer-reviewed before publication.

Their theory went like this: according to official records, Mme Calment's daughter Yvonne died of pneumonia in 1934, but what really happened, they say, is that Mme Calment herself was the deceased party while Yvonne took her place. This deception was carried out, and kept going for the next 74 years, to avoid a complex matter of family property inheritance.

It was a theory straight out of a mystery novel, based on the premise that living to the age of 122 is so damn unlikely that it couldn't have happened.

A team of French, Danish and Swiss researchers, statisticians and scientists assembled to test each of the 17 Russian claims, and their findings unveiled today ruthlessly dismantle the lot.

A forensic investigation into local government records, family finances and family history was combined with medical examination of Mme Calment's hospital records. Detailed analysis of pre and post-1934 family photos was conducted. It was found that Mme Calment was a vivacious and extremely sociable character in her prime, and the family was active and well-known locally: surely someone would have noticed a switch?

The central motive of the deception theory – the inheritance tax fraud – was shown to be absent too: there was no advantage to be gained, it turned out. 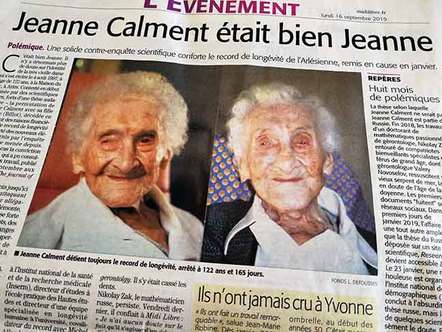 Several French newspapers featured Mme Calment on their front pages this morning, polemically hailing the restoration of a great national icon back to her former status.

Midi Libre even tracked down Nikolai Zak for comment. He remained unmoved, insisting: "A simple DNA test on a blood sample of Jeanne Calment stored in Paris would put an end to the debate."

Jean-Marie Robine, director of the French National Institute of Health and Medical Research (INSERM) and co-author of the debunking paper, dismissed Zak and Novosselov's claims as "hostile" and "unverified", adding the insult: "When you Google the Russian researchers, you find nothing."

We contacted the Guinness Book of Records for comment, but they were too busy with their tape measure, stopwatch and whistle to respond. ®