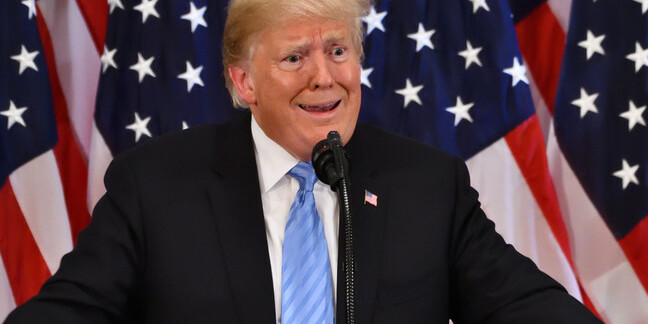 The mystery host of a Silicon Valley fundraiser for President Trump today has been revealed as Scott McNealy, co-founder and former CEO of Sun Microsystems.

The location of the fundraiser, due to be attended by the Command-in-Chief, was kept under wraps, even from those that are reportedly paying $100,000 to attend, with vetted attendees asked to meet at a car park in Palo Alto before being given the address.

The extreme lengths organizers have gone to is a sign of just how divisive support of the US President has become, especially in California, and follows a fundraiser for Trump three years ago that was due to be hosted by then-Intel CEO Brian Krzanich at his home but which he cancelled in the face of anger from Intel employees.

Trump is unpopular in California, especially in this neck of the woods, for a host of reasons, from his stance on immigration and work visas to the rollback of environmental protections to his persistently racist comments in a state that has a huge Hispanic population and culture. As such, Republican supporters in Silicon Valley in particular have tended to keep their support quiet, especially after boycotts have been organized around others who have been public in their support of The Donald. A recent Trump campaign rally in the state drew large numbers of protesters.

This week’s fundraiser has been kept as secret as possible to avoid similar action. However, organizers counted without neighbors of McNealy noticing the erection of tents at his sprawling mega-mansion, in the hills overlooking Palo Alto, that clearly point to a big event. Subsequent queries confirmed that the Sun man is the host of the fundraiser that is expected to raise $3m for the President's reelection efforts.

Also, this morning, the President jetted into Moffett Air Field in Mountain View, which is a bit of a giveaway. Although this is a federal airstrip, it is better known in the area as Google's runway. This is also the first time Trump has set foot in the San Francisco Bay Area since 2016, a move that today sparked protests in the valley.

McNealy, 64, is a free-market, small-government Republican, and notably said in 2017 that he was happy that the “eight years of waterboarding” under President Obama were over. He also has some, um, interesting views about society in general.

He was the person who famously announced that the age of privacy was over, and he followed that up last year by announcing that people’s personal data was safer with marketers than the US government – because you can change who you buy from, and you can't easily switch countries.

“Government is great at the red herring of saying business will know something about you and that is bad. I am not afraid of business. But I am afraid of a bureaucrat who can impact my tax rates or health benefits or what school my kid can go to,” he argued, adding: “If AT&T screws around with my data, I go to Verizon. If the USA screws with my data, I cannot leave.”

It just so happens that McNealy founded and was formerly CEO of marketing software company Wayin and is today its executive chair.

Of course, the fact that the location and host of a presidential fundraiser has itself become the center of its own micro-news cycle is just one more sign that we all currently live in a reality TV bubble. Like The Truman Show but more mean-spirited. ®

Chinese chip giant calls on US tech to help out with Trump tariffs – not a quid pro quo, obviously