The Apple rumour mill churned a perennial favourite back to the surface this week when new patent applications from the company referring to augmented reality tech were published.

The application, spotted by Apple Insider on Thursday, proposes a "Display Device" that drawings indicate is clearly a front-of-face headset with pass-through lenses or screens in front of the eyes.

Anyone hoping for a fully immersive virtual reality hat with an Apple logo on it will be disappointed: the document explains in mild detail how holographic images will be blended visually into the surrounding real environment perceived by the wearer through "eye boxes" in the lenses. 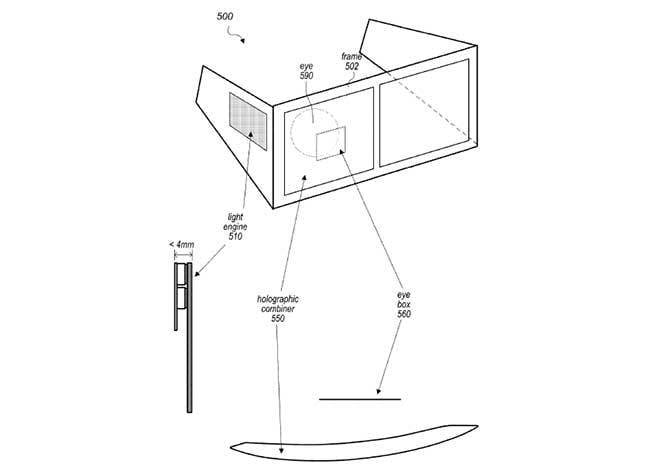 It does this within the lens using a method described as a "reflective holographic combiner". If we understand the babble correctly, projectors at the sides of the unit shine graphics onto each gently curved lens that are reflected back into the wearer's retinas. That is, it shouldn't force you to focus through thick glass prisms.

The projectors are not uniform in make-up but seem to comprise different types, including those in "peripheral eye box positions". This strongly suggests the system uses what jargon hunters call "forveal" imaging, in which high-resolution graphics are directed at the central optic disc of a viewer's retina while displaying lesser quality graphics to the less sensitive forvea region that discerns peripheral vision.

For this to work, the device would need to discern eyeball movement very accurately in real time. To this end, another Apple patent application entitled Image Enhancement Devices with Gaze Tracking covers the principle without detailing any hardware. 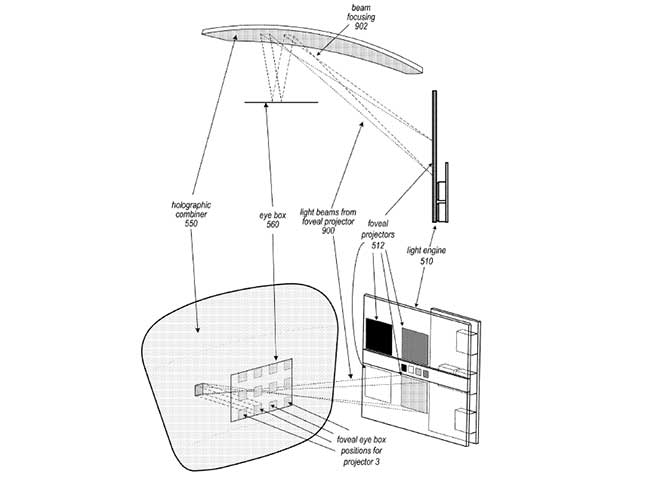 If Apple can make it work, the simpler, flatter lens design might be more comfortable to wear. Accurate gaze tracking while reflecting the AR elements into the wearer's eyes might knit the artificial bits into the real bits more seamlessly, thereby less likely to produce the familiar AR seasickness.

It could also mean an end to all the silly arm waving and pinching gestures, since it might be able to detect point-of-gaze gestures.

That's a lot of mights. But Apple chucks applications at the US Patent and Trademark Office on a weekly basis, on a live-or-die basis. The reflective holographic combiner Display Device might just come to nothing, like many others over the years.

We're still waiting for that television set, by the way.