Updated After being hounded out of parts of Australia's capital Canberra earlier this year, Google-parent Alphabet has declared its Wing division will start hassling innocent Americans as well as Aussies with drone parcel deliveries.

Lucky (or possibly unlucky) inhabitants of Christiansburg, Virginia, in the US, will be able to receive packages delivered via Wing drones starting in October, the company said.

This comes after tormented Australians ran Wing out of Bonython, a suburb of Canberra, in March following a 12-month trial along similar lines. Locals even formed a pressure group to try to halt the Google stablemate's drones, complaining about high noise levels – with the internet giant ignoring their feedback.

For the Virginia trial, the drones will be based locally and fly at heights of between 100 and 200 feet, we are informed, dropping off parcels by entering the hover at 23 feet and lowering the package "with a tether to a backyard or doorstep".

Wing's unnavigable website, evidently designed by somebody with far too many graphic design tools, explains the idea is to deliver items within minutes of an order. This suggests a significant quantity of shop stock is prepared in advance for drone deliveries, having been securely stowed inside the takeaway-style boxes Wing uses for its payloads. 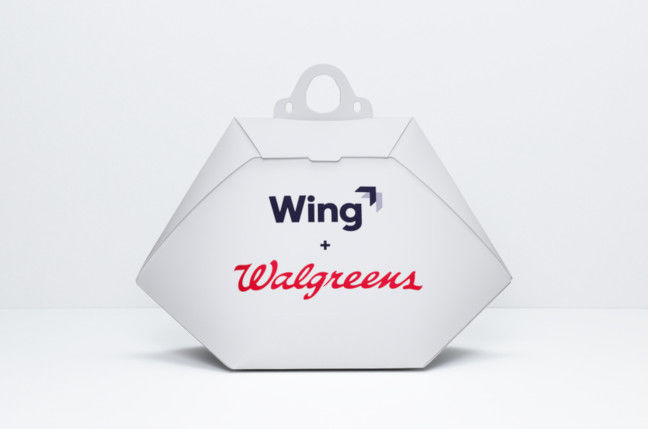 "Christiansburg was selected as the pilot location in part because of Wing's ongoing partnership with Virginia Tech's Mid-Atlantic Aviation Partnership (MAAP), located in nearby Blacksburg," the company said in a statement.

A few years ago, when Wing was first thought up, we carried out a thought experiment and compared the craft to "a parcel-delivering cruise missile". The project was spun out of Google X, the Chocolate Factory's self-dubbed "moonshot" department.

Autonomous delivery drones have been the dream of various companies over the years but nobody has taken it truly commercial yet. Amazon's UK experiments have gone very quiet since its launch in December 2016, while Facebook silently murdered its Aquila internet-by-flying-lasers drone project last summer. ®

A spokesperson for Wing has been in touch to say, although the drone maker ended its trial run in Bonython earlier this year, from April it started operating in the "Crace, Palmerston and Franklin in the Gungahlin area of Canberra," and "recently expanded to include a fourth suburb of Harrison" – and "launched in a second Australian State with operations commencing in Logan, Queensland."

As for the noise gripes, the boffins have apparently tackled that, too: "We invested in the research, design and construction of a new noise abatement propeller that reduces the volume and pitch of the drone during a delivery," Wing's PR told us.

"Our newest aircraft are now equipped with this propeller design, and we intend to use that technology on our delivery drones going forward."