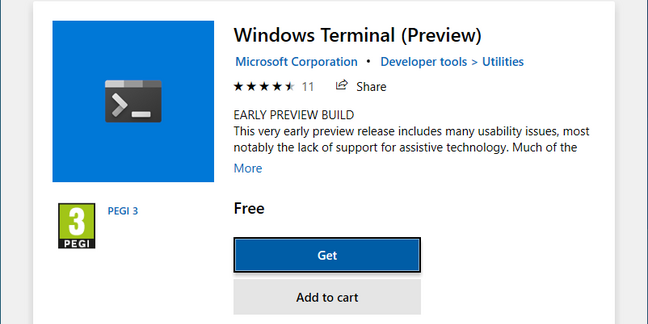 Those brave souls previewing Microsoft's new Windows Terminal were given a treat last night, as the team emitted an update to its latest take on command line shenanigans.

The release comes hot on the heels of the eyeball-friendly monospaced Cascadia Code font, issued earlier this week after a lengthy gestation.

The gang has continued to add features to the tabbed command shell preview which, although they're not in the league of recent releases, are welcome additions.

The first is a schema for the settings file, profiles.json. Windows Terminal lacks a recognisable settings screen and instead relies on the user to tweak a .json file in order to enjoy the customisation capabilities for which the tool is adored by its fans.

If the command line is your thing, then editing a .json file should present little difficulty, right? However, in earlier releases, a typo in that file could leave the preview Terminal in a very poorly state. Rather than implement a fully-fledged settings screen, the gang has opted to include a schema for auto-fill and suggestions when editing the file in something like Visual Studio Code.

It works well, although we had to jump through a few hoops to get it working since our Windows 10 installation had .json files associated with notepad. Manually setting the association for a .json file to Visual Studio Code through File Explorer did the trick.

We also had some issues with that shiny new font, which "will automatically install on download". While the new Windows Terminal auto-updated from the Microsoft Store with no problem, we had to manually install the font ourselves and fiddle with the profiles.json file to free ourselves from Consolas.

Again, this is preview stuff, and the odd adventure in .json is no bad thing.

The team has also added support for selection by Stylus (handy, with that mystery hardware event coming up next week) and a new key binding option in the form of closeWindow. Bound to Alt+F4 by default, it'll terminate the window with extreme prejudice – closing down all tabs with a warning that is all too easy to dismiss thanks to an unfortunate default.

The final fix deals with a crash when pasting from the Clipboard that was introduced in v0.4.

The only fly in the ointment is the adoption of the Windows version syntax, making this the September 2019 release (1909) rather than v0.5.

Of course, Windows 10 (1909) is unlikely to ship this month and will probably be called the October 2019 Update. Or 19H2. Or "the one we hope will make you forget all about what happened last year".

The team are expecting a few more releases before hitting feature complete by the end of the year ahead of a final release in April 2020, just before Microsoft's 2020 Build event.

The gang has also published a roadmap, detailing what it hopes will be in the big bag o'terminal fun by the time v1.0 appears.