Intel has dropped the veil on its gen 2 Optane technology, code-named Barlow Pass, although the details are still light, and revealed it is developing 144-layer QLC (4bits/cell) NAND technology.

Chipzilla is also opening a second Optane development line at its Rio Rancho, New Mexico facility, and will be running second generation wafers through the first line. 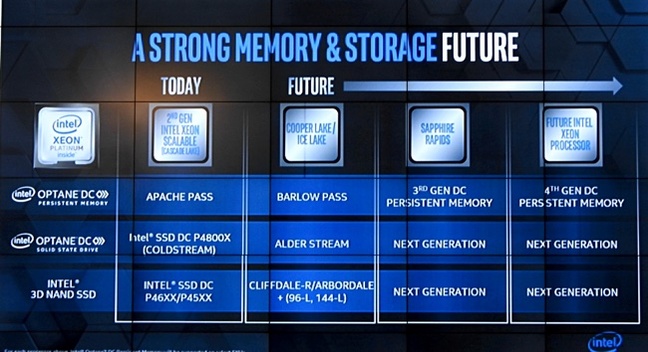 Barlow Pass DIMMs will be released in 2020, along with Cooper Lake (14nm) and Ice Lake (10nm) versions of the Xeon CPUs. Alder Stream gen 2 Optane SSDs are also coming.

A single-port gen 2 Optane enterprise drive is expected in 2020. It will have a gen 2 controller, which should speed things up as well.

The slide shows there is a roadmap for generations 3 and 4 of Optane, with Sapphire Pass Xeons and then an unnamed future Xeon after that.

Intel fellow Frank Hady also confirmed to The Reg that gen 2 Optane has four layers, doubling the size of the die. In theory, that means Intel could double the capacity of its various Optane drives and DIMMs.

The 96-layer QLC SSDs will be shipped to customers next quarter, Intel said, then it will move to 144-layer 3D NAND, with 144-layer SSDs shipping in 2020. The is likely to be a pair of 72-layer components (string stacks), although we are waiting on confirmation for that.

Rob Crooke, SVP and GM for Intel's Non-volatile Memory Solutions Group said Intel was developing Optane persistent memory for PCs and notebooks that could obviate the need for having storage at all. Applications cold be changed by switching a pointer to Optane memory instead of loading the new app from storage; virtually instantaneously.

Intel also unveiled the 665P – a faster version of its 660p quad-level cell NAND flash drive – at the Intel Memory and Storage day.

And this is what the 665P looks like - very similar:

The summarised numbers are:

The 660P uses 64-layer NAND while the 665P uses 96 layers. Dave Lundell, head of strategic planning and marketing for Intel's Non-Volatile Memory Solutions Group, said the media is better and the ASIC and firmware on the drive are also improved.

The 665P will hit the streets in the fourth quarter. No pricing is available yet. ®