Pic Astronomers have spied a rare cosmic curiosity: three supermassive black holes appear to be on the brink of merging with one another after a gigantic galaxy collision took place, a billion light years away.

The system, codenamed SDSS J0849+1114 for short, is a massive blob of gas and dust born from three separate galaxies that smashed into one another. Ryan Pfeifle, first author of the research to be published in The Astrophysical Journal (here’s the free arXiv preprint) and a PhD student at George Mason University, told The Register that the largest black hole could be anywhere as 460 million to 2.9 billion times the mass of the Sun.

Volunteers leafing through the Galaxy Zoo, a citizen science project which has volunteers to classify galaxy types from images posted online, tagged the object as a galaxy merger after it was snapped by the Sloan Digital Sky Survey telescope. NASA’s Wide-field Infrared Survey Explorer spacecraft then revealed that it was blazing hot with infrared energy.

The team of researchers led by George Mason University, Virginia, decided to study the system further with NASA’s Chandra X-ray Observatory and the Large Binocular Telescope to observe the system across different wavelengths.

“We were only looking for pairs of black holes at the time, and yet, through our selection technique, we stumbled upon this amazing system,” said Pfeifle. They detected strong X-ray light being emitted from the system, a sign that the black holes - also known as active galactic nuclei (AGN) are devouring local matter.

“This is the strongest evidence yet found for such a triple system of actively feeding supermassive black holes,” he added. 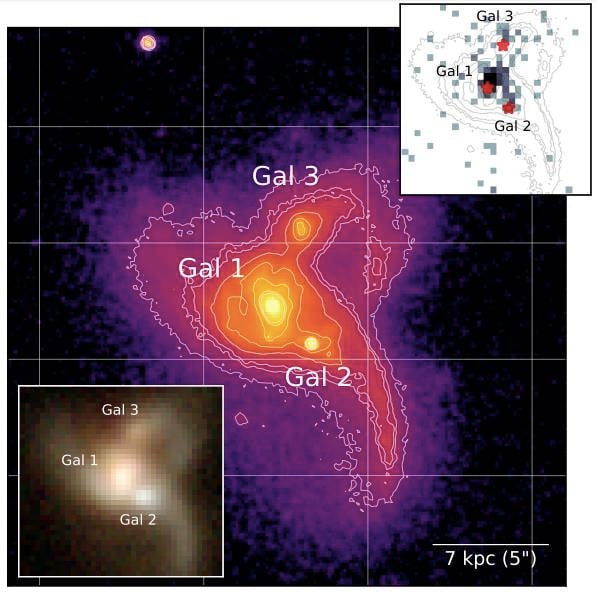 Images of SDSS J0849+1114 in different wavelengths. The bright blobs are where the black holes from each galaxy resides. Image credit: Pfeifle et al.

Triple whammies like SDSS J0849+1114 are a rare feat. Even double AGN systems are uncommon; astronomers have only managed to verify less than 30 so far. They shouldn’t be that unusual, however, as merger events are a normal part of evolution for galaxies. Our own galaxy is on a collision path with its nearest neighbor Andromeda, some two million light years away.

But it’s difficult to spot AGNs since they’re cocooned by thick clouds of gas and dust, preventing telescopes from detecting any light. Pfeifle hopes that by studying the new triple AGN system, it’ll help astronomers find more of these strange objects.

“Through the use of these major observatories, we have identified a new way of identifying triple supermassive black holes," he explained. "Each telescope gives us a different clue about what’s going on in these systems. We hope to extend our work to find more triples using the same technique.”

The supermassive black holes look like three bright blobs arranged around the center of SDSS J0849+1114, which has three arms. The presence of a third black hole means that they should all slam into one another at a shorter timescale than if there were just two.

Unfortunately, observatories on Earth won’t be able to detect the gravitational waves emitted if and when the black holes smash into one another. “This is because black holes of this mass regime - several hundred million to several billion times the mass of the sun - result in gravitational waves at much longer wavelengths than are detectable by LIGO,” said Pfeifle.

The researchers hope that strange systems like SDSS J0849+1114 will help astronomers work out how black holes grow to such giant sizes. “One burning question in astronomy is how these supermassive black holes at the centers of galaxies can grow so quickly, to sizes of one million to several billion times the mass of the sun, because we don’t just see them in close-by galaxies – they’ve actually been detected as early as a few hundred million years after the Big Bang.”

“Based on theoretical work developed over the last several decades by many groups, we believe that the most rapid growth of supermassive black holes occurs in late-stage mergers, so galaxy mergers may actually represent a viable way for these black holes to grow so quickly. By studying merging systems, we can try to uncover the relationship between the galaxy growth and the growth of the central supermassive black holes,” he concluded. ®