Reach out and touch fake: Hand tracking in VR? How about your own, personal, haptics?

Oculus may be bringing hand tracking to the Quest, its standalone virtual reality (VR) platform, but haptic feedback is really where things are at.

While VR visuals continue to improve, more analog experiences, such as prodding something in the virtual space, have lagged.

The Register had a play with one of the latest attempts to address this from Dutch outfit Manus VR in the form of the wireless Prime Haptic gloves, which retail for a shade under €5,000. 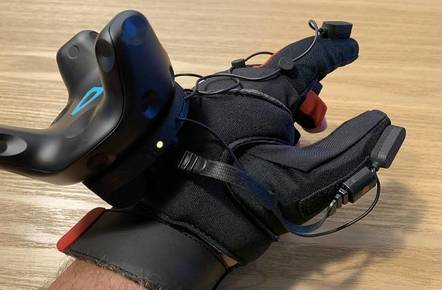 The gloves themselves, as you can see above, look a little ungainly, with a Vive tracker on top and another inertial measurement unit (IMU) on the thumb. The chunky tracker reads positioning information on the hand, while the IMU works out the rotation of the thumb. The glove has internal circuitry to detect the position of the finger joints.

And those wires? They lead to haptic pads on the fingertips to simulate that all-important sense of touch.

The result is a fully articulated hand in the virtual world.

At this point, one could point out that optical hand-tracking, like in the HoloLens 2, can do pretty much the same thing. However, the accuracy can be iffy and the field of tracking sometimes limited. There were no such issues with the Prime Haptic glove, and it was surprising just how quickly one got used to using a fully articulated hand in virtual environments rather than wielding a controller.

The haptics, with their Heath Robinson appearance, were equally impressive. Though the wireless gloves lack the machinery to stop your hands actually moving, the sensation of reaching out and grabbing something in a simulation is immeasurably improved by the gentle, or firm, tap on the fingertip.

We had a crack at assembling an engine in VR and while it won't be troubling the interior of a real workshop any time soon, we could see how the addition of articulation and haptic feedback would dramatically improve a training session. This thing is squarely aimed at the corporate world.

Plug-ins for Unity and the Unreal Engine exist, but we can't imagine many game developers investing too much time in something that costs players the best part of €5,000. The downsides don't end there – it only works with the HTC Vive or Vive Pro. Serdal Yeter, Manus VR marketing bod, told us that the lack of standalone trackers made implementation trickier on Oculus. And then you need a hulking PC to deal with the extra processing for articulation as well as a space big enough to set up the Vive lighthouses – sensors around a room to detect the headset and controllers' position.

And while Manus VR's gloves are wireless, the basic Vive is not.

But Manus isn't the only game in town as far as articulation is concerned. As well as Microsoft's still-to-be-released HoloLens 2, which features optical tracking and finger articulation good enough to allow a user to play a virtual piano on stage, Oculus announced yesterday that hand tracking would be coming to the Quest.

Unlike the wizardry used by the HoloLens 2 to calculate the position of the user's extremities, the Quest will employ its monochrome cameras and "AI magic".

Good luck with that – the Quest is hardly the processing powerhouse. One Oculus developer we spoke to bemoaned the effort needed just to squeeze his company's existing Rift game into the confines of the standalone Quest hardware.

Yeter described optical tracking for hands as "not very fault proof" as sensors can get confused, with scenarios such as the index and middle finger getting mixed up or freezing completely as processors worked out what a human's finger joints might be doing. Hence the approach of using a lightweight glove.

Those haptics make a tremendous difference to the sense of immersion. "The ultimate goal," said Yeter, is "that you cannot move your finger anymore." Right now, each digit receives a nudge of varying pressure as the virtual hand touches a virtual object.

Devices do exist that can stop a finger or hand dead. However, few could be called lightweight and certainly not wireless.

And as for Oculus? A spokesperson for Manus VR told us: "Manus is excited that Oculus is including hand tracking on the Oculus Quest. It will push forward the implementation of intuitive interaction in VR," before excitedly squeaking: "Did you also notice the Manus Xsens glove in the OC6 intro movie?"

While the technology used is very different, it is hard to not see a Quest that has dispensed with controllers as a competitor with a very keen price point, even with the potential pitfalls of optical tracking.

Assuming the reality comes close to that presented in Oculus's glossy previews. ®

who, me? No crypto needed, just a project with a tough deadline that nobody minded missing
Software5 Dec 2022 | 5

Hosting company has nothing to say on data loss, restore times, or root cause
Security5 Dec 2022 | 6