The mod firing squad: Stack Exchange embroiled in 'he said, she said, they said' row 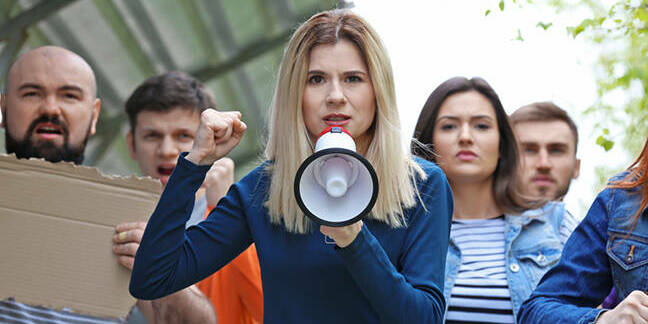 Updated In the past month or so, about 20 volunteer moderators out of about 600 have distanced themselves from Stack Exchange, the online network of Q&A communities, to protest corporate policy changes and the removal of a moderator, Monica Cellio, over alleged violations of as-yet unpublished Code of Conduct changes.

Cellio on Friday posted her account of what happened, claiming that her moderator status had been revoked by a Stack Exchange employee on the assumption Cellio "will in the future violate a thoughtcrime-style provision of a Code of Conduct change that hasn't been made yet."

Cellio raised concerns that the Q&A site's revised Code of Conduct would require people to use other people's preferred gender pronouns – a phrase that advocacy group Gay, Lesbian & Straight Education (GLSEN) says should be simply "pronouns" to assert that their chosen pronouns are mandatory and not optional.

Caleb Maclennan, a Stack Exchange moderator who resigned in protest of Cellio's treatment, offered his own take on the dust-up. He suggests Stack Exchange intends to treat refusal to use a person's designated pronouns as a code of conduct violation.

In a post on Monday evening, Cellio offered more details about what happened to complement Maclennan's account.

"In January a mod asked a discussion question on the mod team: should we require that people use preferred pronouns?" she explains. "My answer said we must not call people what they don't want to be called, but there are multiple ways to avoid misgendering and we should not require a specific one. Under some pressure I said I don't use singular they or words like chairwoman but solve the problem other ways (with examples)."

She said the moderator linked to her question and called her a bigot. Things went downhill from there.

In response to an email from The Register, Stack Exchange director of community Sara Chipps said, "On Friday, we revoked privileges for one Stack Exchange moderator when they refused to abide by our Code of Conduct (CoC) after being asked to change their behavior multiple times. The disagreement stemmed from an interpretation of a certain policy, but our CoC is not up for debate."

"While we can’t discuss any more specifics, I’ll share that we take our CoC very seriously," Chipps continued. "It was created to foster a community of kindness, collaboration, and mutual respect. We understand that a few other moderators have resigned, and they may or may not have full knowledge of the situation. But we hope all moderators know that we very much value and appreciate their contributions, and above all else, we are committed to creating communities that are welcoming and inclusive."

Chipps's reply refers to the unnamed moderator using the plural "they," a common fallback for the lack of an agreed upon gender-neutral pronoun in English. Cellio, for what it's worth, does not include any preferred pronouns on her Twitter account.

Asked to confirm that Cellio was the moderator in question, a company spokesperson said, "Cellio (she/her) would not use stated pronouns, which violates our current CoC. We are soon publishing an update to the CoC to even more explicitly cite misgendering users or moderators as a violation."

Stack Exchange, in short, is chafing under the same socio-political friction that various programming communities and conferences have tried to resolve.

But there's more to it than language politics. In addition to a revised Code of Conduct, the Stack Exchange community has to deal with a new CEO, a new content license, and ads that need better controls. That's a lot for any group to digest, particularly one that runs on goodwill and free labor. ®

Cellio has now settled her case with Stack Overflow and has been told she may apply to regain her moderator designation. Cellio hasn't said whether she'll do so.