London-based Planet Computers has said its Cosmo Communicator, a folding phone with a physical keyboard evocative of '90s Psion clamshell palmtops, has finally made its way into production.

There is a family connection when it comes to the Psion scion. Technical designer Martin Riddiford worked on both the Psion 3 and 5 devices back in the day and is also responsible for the design of Planet Computers' Gemini PDA, released in early 2018.

The Cosmo Communicator is the second generation, featuring a secondary external display as well as updated hardware. Riddiford describes his work on the Gemini here.

We got some hands-on time with the Cosmo, using one of the first production units running Android 9. Like the Gemini, it is a chunky affair, but a couple of millimetres thicker and fractionally heavier (326g). Despite that, it is a more attractive device, mainly because of the colourful 2" external display, replacing a row of LEDs on the Gemini, and allowing you to make and answer calls, read messages, and more, without having to flip the device open.

"We've made it more of a phone, and also added a 24MP camera," Planet CEO Dr Janko Mrsic-Flogel told The Reg. Other new features include a dual-SIM slot, eSIM support, RAM increased to 6GB (from 4GB), and flash storage doubled to 128GB. There is also a fingerprint reader, NFC support, Bluetooth 5.0 and improved LTE connectivity.

The external front display has its own Arm STM32 CPU and runs FreeRTOS. The main operating system communicates with this secondary system enabling features like calling functions, messaging, alerts, media playback control and camera control. It makes the device more usable, though it still feels oversized to hold to your ear.

Planet is a small company. It has sold over 10,000 Geminis, we were told, but with an Indiegogo funding model you should not expect the polish you get with a device from one of the big vendors. That said, the Cosmo feels solid and well-made, and the heaviness, while a bit painful in a pocket, becomes an asset when the device is placed on a desk for typing. 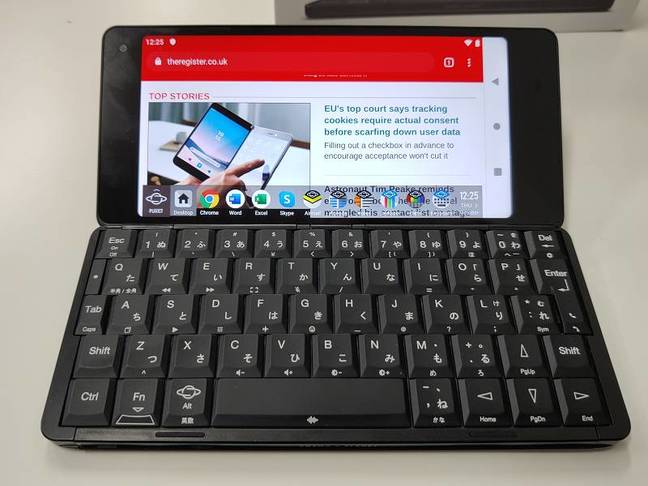 This is important because typing is one of two reasons you might want a Cosmo. "It's not just writers, journalists, bloggers; there's a lot of messaging going on. And we think [the keyboard] is nice if you are writing anything long. It is completely impossible to edit anything on a pocketable mobile device unless you have cursor keys."

The other reason is to run something other than Android. The bad news is that on day one only Android is supported, but LineageOS (based on Android), Debian, Kali and Sailfish support is planned. LineageOS and Debian will come first. This is partly a community effort, with Planet cooperating by opening up the boot loader in the kernel and assisting with support.

How will you install Linux? "We're in the middle of discussing how it would work," said Mrsic-Flogel, a worrying comment for the impatient. "We could actually download over the air. The second option is we would connect to a PC and use a tool to refresh the unit." Dual-boot will be possible, in fact up to four boot options, controlled by holding down key combinations.

The full price of a Cosmo is £799 including VAT, though early backers have paid from £445 on Indiegogo. The original promise was May 2019, though. How is it going? "They're in production," said Mrsic-Flogel. "Nobody's got their devices yet. Assembly has started for the Japanese units. Next week we expect our first units to be shipped to backers."

According to Mrsic-Flogel, the initial run is 4,000 units and he expects all backers to receive shipments in October. If you do not need the new features, Gemini also remains available. Full specifications of both are here.

Planet, of course, has big ambitions, hoping to do deals with operators and to sell 100,000 Cosmos. This is a tough market for a small company; the physical keyboard puts it in a niche of its own but there are reasons why touch keyboards have taken over for most of us, bulk and weight being two of them.

It is true, though: editing a spreadsheet or typing into a terminal on the go is a great deal easier with physical keys and cursor keys, and the fact that some Gemini enthusiasts are now queuing up for a Cosmo shows that the market exists at some level. ®