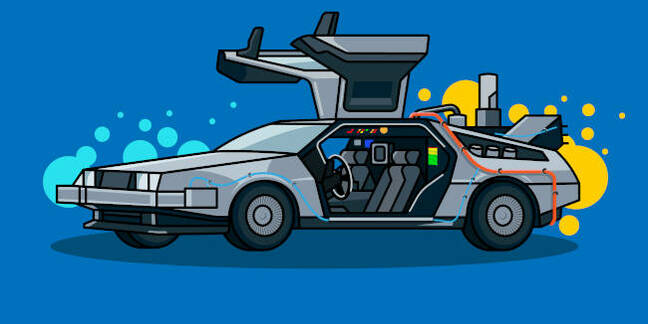 Ongoing uncertainty about whether the UK will exit the European Union on October 31 – Halloween – has created some time-bending problems for owners of .eu domains.

As we have previously noted, Brussels bureaucrats have repeatedly flip-flopped on what should happen to Brit-owned .eu domains after Brexit, forcing the company that operates the registry, EURid, to publish and repeatedly update a special Brexit page to keep tens of thousands of its customers up-to-date.

Well, there’s another update and this one may require EURid to travel back in time.

Having initially decided that any .eu domain with a UK registrant – of which there were 300,000 in existence – would simply be cancelled the day after Brexit, the grey suits were swamped with angry domain owners pointing out some of life’s realities.

But rather than revisit a decision that was completely unnecessary – there is no need to kill off existing .eu domains and in fact the internet industry has long had a policy of not doing that – they decided to do what Brussels does best and wrapped the process up in red tape.

All .eu domain owners would have to provide proof of EU citizenship – checked by the registry – before being allowed to register a .eu domain, it was decided. And there would be a new ability to "suspend" rather than block domains according to a new set of rules… that hadn’t been written yet and would be based around the vague concept of "safeguarding Union values."

That approach led to more confusion and resulted in the UK government advising the owners of .eu domains to consider getting a different domain and to seek legal advice about whether to sue over the forcible removal of their existing .eu domain – which many companies have built their online business on.

The threat of legal advice caused yet another policy shift from the EU. This time there would be a strict two-month cancellation period for any .eu domain registered to a UK address, even if the owner is a European citizen. And no appeals process.

Under the new guidance, in the event of Brexit – which at that point had become a no-deal Brexit thanks to ongoing dysfunction of Parliament – the owners of any .eu domains registered in the UK, regardless of who they are owned by, would have two months to transfer their domains to a different person or entity based in Europe, or the domain will be cancelled and inoperable.

Even the bureaucrats are unsure whether this approach is legal however and so came up with brand new classifications for domain names in an effort to deal with legal challenges: “On hold” and “Suspended.”

This was the official explanation in case you want to try to make sense of it: "With respect to domain names that are ON HOLD, meaning for which there is a legal court case pending, these domain names will remain registered until there is an outcome of the court case. However, they will be SUSPENDED and will cease to function as of 30 May 2019.”

Of course that May date was inserted when the UK was expected to Brexit in May. And talking of May, it was still in May – the 24th – when British Prime Minister Theresa May resigned after having failed repeatedly to get a Brexit deal through.

Since then things have only got more confusing. But as of the time of writing – late UK time on Friday October 4 – we are in a mind-bending standoff where the UK Parliament has passed a law requiring the prime minister/government to extend the Brexit date to January 2020 if he is unable to reach a deal before October 31.

The UK government/prime minister has formally said he will respect that law in documents filed in court while at the same time saying in public that he will not and Britain will leave without a deal on Halloween.

So the British government will both follow the law and potentially break it, subject to caveats. If no deal can be struck in time, an extension must be sought, though Parliament can vote to eject from the union without a deal anyway (but remember, it has previously voted against such a hard-line no-deal Brexit), and an extension is not needed if Parliament approves an exit agreement (but remember, it has voted against previous proposed arrangements). What a mess.

Indeed, this is very far from the first time that Britain has ended up in a nonsensical position during Brexit. There was of course the fact that Theresa May insisted that her Brexit deal would pass when literally everyone in the UK knew it wouldn’t. And she insisted a second time. And then a third time.

Then there was newly installed PM Boris Johnson’s attempt to close Parliament early and for five weeks which he claimed had nothing to do with Brexit – but which literally every person on the planet knew was entirely about Brexit. The court threw that nonsense out so Parliament, like Schrodinger’s cat, was both sitting and not sitting at the same time.

Well, the Brexit impasse combined with the EU bureaucrats' two-month cancellation period for .eu domains has taken the absurdity one step higher and into time travel.

Because, under the most recent rules, posted on EURid’s Brexit page, the registry is obliged to let all registrants with .eu domains that are registered in the UK or Gibraltar (yes, Gibraltar has now been pulled into this) know that their domains are not in compliance on 24 October before a Brexit date of 1 November.

The likelihood of anyone knowing whether Brexit will actually happen on November 1 by October 24 is slowly approaching zero, meaning that in order to follow EU rules imposed on it, EURid will need to go back in time to let people know were warned that they need to shift their domains before a Brexit date that will already have passed.

Just to add to the fun, the new Brexit date of 31 January – that may or may not happen – will come after the EU cut-off date of 1 January for updating .eu domain contact data to an address in the European Union or risk having the domain cancelled.

Of course, if Brexit doesn’t happen on October 31 then the UK would still be a part of the European Union so the new rules would be logically inconsistent and wouldn’t apply. But you just have to ask: ISN’T THERE A BETTER WAY TO DO THIS?!

Yes, there is a much, much better way to deal with the uncertainty of a Brexit date as it applies to online addresses than constantly shifting deadlines and threatening to cancel people’s websites and email. And that is to stop tying a domain name to an arbitrary political date.

We just don't see how someone in the UK with a .eu domain when the UK is no longer within the European Union can cause any kind of real confusion or disruption. Especially when you consider they will likely have had that domain for years. It simply does not matter: it is an internet address.

And that is why the internet infrastructure industry has, for decades, decided that cancelling domain names is a bad idea that creates far more problems than it will ever solve. That recognition is what is commonly called “wisdom” – something that is in perilously short supply at the moment. ®

Registry to ban Cyrillic .eu addresses even if you've paid for them

As the UK updates its .eu Brexit advice yet again, an alternative hovers into view

Brussels changes its mind AGAIN on .EU domains: Euro citizens in post-Brexit Britain can keep them after all

Post-Brexit plan for .EU tweaked: No dot-EU web domains for Europeans in UK, no appeals, etc

It's not up there with looming food, medicine shortages, but it's still rather annoying