Better at keeping dust out, though durability still a concern 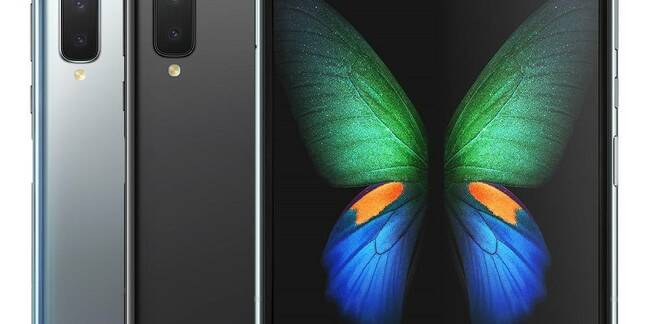 Samsung's Galaxy Fold ... A beautiful screen but is it too fragile?

Screwdriver wielding nihilists at iFixit have dismantled the revised Galaxy Fold, declaring that despite Sammy implementing "durability quick fixes" it proposed in a previous teardown, the device remains "alarmingly fragile".

Samsung's unusual (and pricey) folding phone was initially set for launch in April but was withdrawn after early reviewers ran into problems. This was in part because some tried to remove the screen protector, which turned out to be integral to the design, thereby damaging the device. Not only that, even with the screen protector left intact, the original Fold was too fragile, vulnerable to dust and dirt working in via gaps at each end of the hinge.

Back in April, iFixit took an early look at the device, remarking: "The slim bezels clearly aren't flexible enough to cross the fold. Did Samsung decide this fragile screen could survive in the open? Or was there no sufficient material to be found?" The team's original conclusion was that "the overwhelming fragility is a bad sign for repair".

That first teardown was removed at Samsung's request – partly because the device was not purchased at retail and might not have been quite final. However, Samsung's cancellation of the launch suggested that iFixit was not too far wrong.

Samsung redesigned the Galaxy Fold, not just modifying the first batch, but building it anew. The Fold was relaunched in September, with the company claiming that the device is now robust enough to survive 200,000 folds.

The iFixit team has published a fresh teardown based on the revised design. Viewing the internals is of interest, but potential customers will be primarily concerned with whether the mobile is robust enough to be durable.

There is good news and bad. Samsung, iFixit reports, has made several key improvements to protect the delicate folding OLED display from debris. There are new plastic protection caps at each end of the hinge, flexible gaskets stretched over the gap, an extra metal layer between the display and its backing plates, and the screen protector, also called the "Advanced Polymer Protective Layer", goes right to the edges so it no longer looks removable.

There is also tape covering the hinges so that if dust penetrates "gaps in the outer spine" it will not so easily get behind the display itself.

The teardown team nevertheless concludes that "this thing is still pretty fragile".

Other reports have also cast doubt on Samsung's 200,000 folds claim. CNET tried an experiment and reached only 120,000 folds. SquareTrade tested the Fold with a "new robot". The first 18,500 folds were fine. Then a "pixel blob" appeared. Thereafter, it survived 120,000 folds suffering only "slightly deteriorated hinge action", in addition to the aforementioned blob.

SquareTrade also performed two drop tests from six feet, both of which rendered the phone unusable.

A problem with all these tests is that they do not reflect real-world usage. The number of times a phone will be unfolded each day is unknown, as is the impact of human handling versus that of a robot. It is not only the Fold that is somewhat delicate: annoying faults and cracked screens are common as devices age and suffer drops and scrapes.

It does seem, however, that designing a durable folding screen is a tough engineering challenge, and users will be wary. In the US, the company quotes $599 to replace the "Flex Display Screen", though there is a special price of $149 for the first repair if you purchase before 31 December 2019. UK prices are not yet available.

When we tried the Fold briefly, we found the 7.3-inch screen impressive, especially for photography. But it is notable that other vendors, like Microsoft with the forthcoming Surface Duo, seem to be inclining more to dual-screen designs, where each display can be tightly sealed. ®