Remember the FBI's promise it wasn’t abusing the NSA’s data on US peeps? Well, guess what… 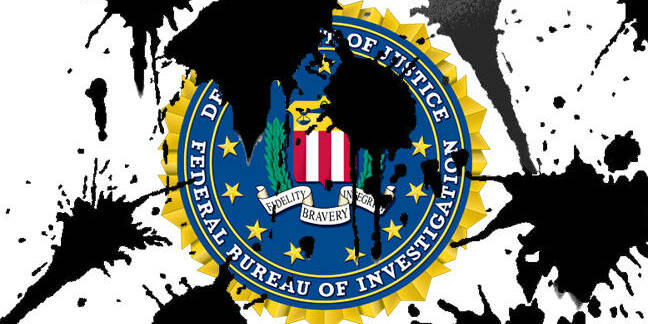 The FBI routinely misused a database, gathered by the NSA with the specific purpose of searching for foreign intelligence threats, by searching it for everything from vetting to spying on relatives.

In doing so, it not only violated the law and the US constitution but knowingly lied to the faces of congressmen who were asking the intelligence services about this exact issue at government hearings, hearings that were intended to find if there needed to be additional safeguards added to the program.

That is the upshot of newly declassified rulings of the secret FISC court that decides issues of spying and surveillance within the United States.

On Tuesday, in a year-old ruling [PDF] that remains heavily redacted, everything that both privacy advocates and a number of congressmen – particularly Senator Ron Wyden (D-OR) – feared was true of the program turned out to be so, but worse.

Even though the program in question – Section 702 – is specifically designed only to be used for US government agencies to be allowed to search for evidence of foreign intelligence threats, the FBI gave itself carte blanche to search the same database for US citizens and persons by stringing together a series of ridiculous legal justifications about data being captured “incidentally” and subsequent queries of that data not requiring a warrant because it had already been gathered.

Despite that situation, the FBI repeatedly assured lawmakers and the courts that it was using its powers in a very limited way. Senator Wyden was not convinced and used his position to ask questions about the program, the answers to which raised ever greater concerns.

For example, while the NSA was able to outline the process by which its staff was allowed to make searches on the database, including who was authorized to dig further, and it was able to give a precise figure for how many searches there had been, the FBI claimed it was literally not able to do so.

In a year-long standoff between Senator Wyden and the Director of National Intelligence, the government told Congress it was not able to get a number for the number of US persons whose details had been brought up in searches – something that likely broke the Fourth Amendment.

Today’s release of the FISC secret opinion reveals that giving the FBI virtually unrestricted access to the database led to exactly the sort of behavior that people were concerned about: vast number of searches, including many that were not remotely justified.

But that, it turns out, was a bold-faced lie. Because we now know that the FBI carried out 6,800 queries of the database in a single day in December 2017 using social security numbers. In other words, the FBI was using the NSA’s database at least 80 times more frequently than the NSA itself.

The FBI’s use of the database – which, again, is specifically defined in law as only being allowed to be used for foreign intelligence matters – was completely routine. And a result, agents started using it all the time for anything connected to their work, and sometimes their personal lives.

In the secret court opinion, now made public (but, again, still heavily redacted), the government was forced to concede that there were “fundamental misunderstandings” within the FBI staff over what criteria they needed to meet before carrying out a search.

Those misunderstandings had somehow persisted even after a series of public Congressional hearings that discussed and reviewed the program.

Even after Wyden’s fierce questioning and calls for greater accountability, the FBI failed to document when the database was being searched and for what reason. As such the FISC judge, James Boasberg, determined in October 2018 that “without such documentation and in view of reported instances of non-compliance with that standard, the procedures seemed unreasonable under FISA's definition of minimization procedures’ and possibly the Fourth Amendment.”

Or, in other words, the FBI was breaking the law and the constitution. And it did so tens of thousands of times between 2017 and 2018 – while at the same time promising Congress that everything was fine and it was only using the database for rare instances connected to national security.

*Microsoft taps your shoulder* Hi sorry yeah, we're still suing US govt for right to tell people when they are spied on

To say Senator Wyden is unhappy about this turn of events would be an understatement. “Last year, when Congress reauthorized Section 702 of FISA, it accepted the FBI’s outright refusal to account for all its warrantless backdoor searches of Americans,” he said today in a statement.

“Today’s release demonstrates how baseless the FBI’s position was and highlights Congress’ constitutional obligation to act independently and strengthen the checks and balances on government surveillance.

“The information released today also reveals serious abuses in the FBI’s backdoor searches, underscoring the need for the government to seek a warrant before searching through mountains of private data on Americans. Finally, I am concerned that the government has redacted information in these releases that the public deserves to know.”

In short, little had changed in the security services’ approach since Edward Snowden revealed the scale and depth of spying operations carried out against US persons and foreigners. Given the slightest opportunity to spy on peeps, the FBI will take it, lie about it and when finally caught, promise to do better next time. ®