Microsoft Teams: The good, the bad, and the ugly

Why Teams is a key product despite its frustrations – and yes, a Linux client is on the way

Analysis Microsoft continues to plug Teams as the "fastest growing application" in the company's history, though it is not sold separately, only as a feature of Office 365 (there is also a free version). At the same time, there are major feature gaps that are only now being plugged, and it is not easy to manage. What is the attraction?

Teams is important because prior to its introduction, the company had only modest success in establishing a collaboration tool beyond email. There is SharePoint for document collaboration, and there was real-time communication and meetings from Microsoft Lync, rebranded in 2012 as Skype for Business and now rolled into Teams. There is also Yammer, acquired by Microsoft in 2012, which is a business social networking tool.

Secure private channels is a feature promised for later this month

These products were not failures, but they did not meet the need for an easy to use real-time collaboration tool – which meant users went looking for alternatives, and ended up on tools including hipster collab platform Slack.

Announced in November 2016, and made available in early 2017, Teams immediately gained momentum as a business messaging tool for project-based groups. Users grasped the basics quickly: they could create a team, add members, have shared discussions and share files and documents.

Fewer than three years later, Microsoft claims over 500,000 organisations are using Teams and it has amassed over 13 million daily users – more than rival Slack's 12 million. Slack on Thursday called into question the way in which other corporations – cough, cough, Microsoft – count daily active users.

There are some odd things about Teams though, thanks to its history. Teams was not altogether a new product, but rather a wrapper around a number of existing services. That starts with Azure Active Directory (AAD), the identity system for Office 365.

When a user creates a Team, it creates an AAD group, a hidden shared inbox and shared calendar in Exchange, a team site and document library in SharePoint, a OneNote notebook, and a chat workspace. Of all those, only the chat workspace, an Azure service, was completely new. 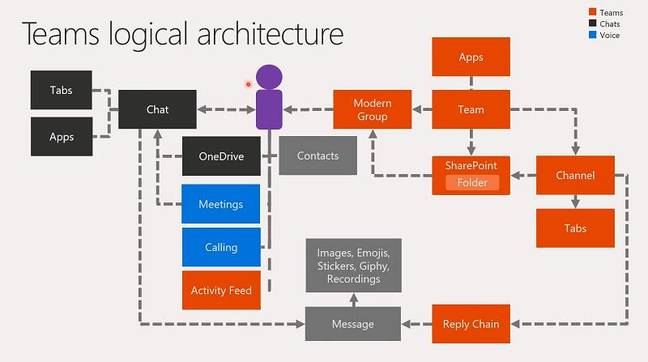 This integration is both a strong and weak point in Teams. It is a strength, because Office 365 admins are familiar with these component services, and because Teams slots nicely into the compliance and governance aspects of Microsoft’s platform. It is a weakness, because individual services like Exchange and SharePoint are themselves complex and full of legacy. Bolting them altogether into a new thing called Teams hid but did not remove that complexity or, in some cases, the overlapping functionality.

This is apparent in issues like the shared calendar problem. Creating a team creates a shared calendar in Exchange, but this is not surfaced by default in the Teams app. You can access it via a web link, but this is a workaround and ineffective for guest members, outside the AAD tenant. Hence, “Include Office 365 group calendar in Teams” is the third most requested feature in the Teams public feedback. Microsoft is working on it, but a user says “Approaching 3 years now. Any update on a release date? My users are past the point of itchy.”

Top of that list of requested features is support for "private channels", conversation sections that have invitation-only membership and that are only visible to members of that channel. Without this feature, you have to create a new team for each project or topic to which you want to restrict access. "Secure private channels" is a feature promised for later this month.

Another issue is that you cannot use multiple Teams accounts, with different organisations, at the same time. You have to log out of one and into another. Slack has no such problem. Microsoft is promising to offer "Fast tenant switching" soon and full multi-tenant, multi-user support at a later date. It will likely be complex to implement because of the deep integration between AAD and Office 365 and Windows.

Teams also works best for organisations which are all-in on Office 365. If you have a hybrid setup with Exchange on-premises, for example, it works but not to the full extent, because of its dependencies. 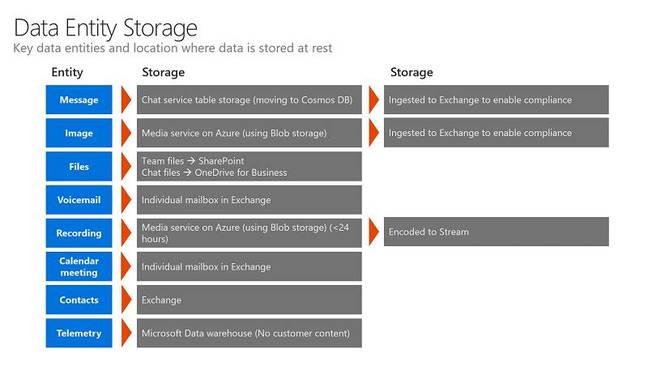 Where content is stored in Teams, across SharePoint, OneDrive for Business, Azure and Exchange

Users like being able to create Teams – but is it too easy, with Teams proliferating across an organization and potentially making information harder to find?

Which Team was it where that key information was posted? The multiple underlying services created in Exchange and SharePoint when Teams are initialised makes this messy to administer.

Microsoft's Levente Nagy, a product marketing manager, told The Reg at the recent Future Decoded event in London that this can be controlled by policies. "We've introduced the ability to have naming conventions, and you can lock down team creation to only a certain set of users, maybe apply an approval workflow to it."

There is also an expiration feature. "You can set up expiration polices and after that people will need to renew their teams. At Microsoft we have employed this ourselves, every six months I get a message, the following groups are about to expire, do you still want to use them? That helps to clean up all the mess."

Nagy says, though, that Microsoft regards the ease of setting up a Team as a key feature. "We still recommend against locking it down too much, because that stifles productivity," he told us. 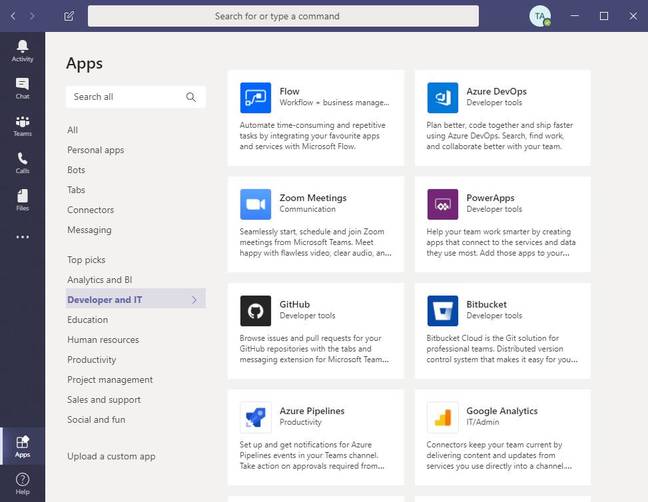 Like all of Microsoft's key products, Teams is also a development platform. You can extend it with web applications that are packaged so that users or admins can easily add them to a Team. Microsoft sees Teams as a hub for users from which they can manage not only meetings and chat, but also business processes. The Teams client is cross-platform, built with the Electron framework, and available on Windows, Mac, iOS and Android. No Linux yet, but last month Microsoft said "We're pleased to confirm we're actively working on it."

Teams has plenty of frustrations, but it also plays a key role in pulling together the parts of Microsoft's sprawling Office 365 platform in a manner that users can adopt. Teams also fits well with Microsoft's collaboration hardware, from Surface Hub to the newly announced Surface Neo and Duo.

Business still runs on email, but the role of email is being gradually eroded by other messaging tools, following the consumer trend towards private messaging platforms. Teams is therefore now a critical component for the company, and is likely to feature prominently in the company's announcements at the Ignite event next month. ®