Once they find out how much data their devices devour

Feature The Glass Room, a conceptual art and educational exhibit that opened Wednesday in a storefront on Market Street in San Francisco, provides visitors with a glimpse of how technology companies use personal data in the hope of prompting questions about the consequences of information technology.

The interactive show, curated by advocacy group called Tactical Tech and presented by Mozilla, has appeared in Berlin, London, and New York. It's organized around five themes: Personal Data (privacy), Invisible Labor (the human and environmental costs of technology), Trust in US (technology companies and accountability), Big Mother (the normalization of surveillance), and Open the Box (personal data journeys).

The aesthetic of the venue recalls Apple or Microsoft retail stores. While spiffy minimalism has become commonplace among high-end brands, a staff member minding the Data Detox Bar confirmed that particular exhibit was designed to evoke Apple's Genius Bar.

The Data Detox Bar offers visitors a Data Detox Kit, a printed version of the web resource of the same name that they can take home. It provides guidance about ways to secure digital data, improve online privacy, and enhance digital wellbeing.

There are around 50 distinct works on display. For example, Aram Bartholl created Forgot Your Password? by printing out 4.6 million passwords exposed when LinkedIn got hacked in 2012. Seeing eight hardbound volumes that consist of nothing but printed passwords turns out to be rather thought-provoking.

Another highlight is Notes on an Apology Tour, a project by La Loma and Tactical Tech, that takes Facebook CEO Mark Zuckerberg's various apologies, acknowledgements of failure, lessons learned, pledges, and promises and assembles his statements of contrition into Rolodex for manual browsing: 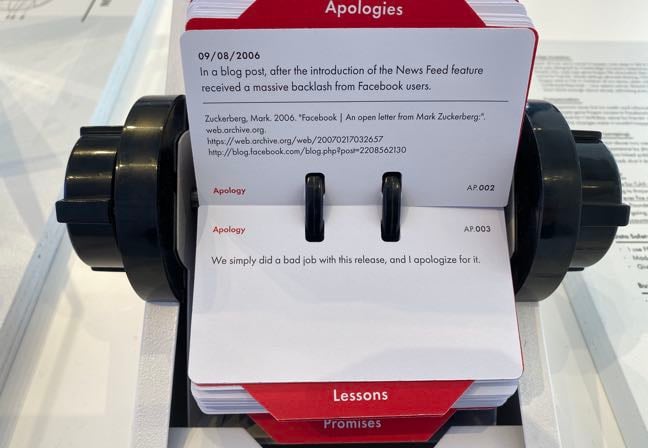 Also not to be missed is 100+ Protests, again by La Loma and Tactical Tech, a work that documents protests against various tech companies – Amazon, Apple, Cisco, Facebook, Google, HP, IBM, Intel, Microsoft, Netflix, Oracle, Palantir Technologies, and PayPal – by assembling a display board filled with plastic cards detailing the date and nature of incident.

Then there's Invisible Labor, a sculpture made by Kiki Mager from the 2,160 solder drops, 3,927 pieces of Kapton tape, and 2,541 pieces of screen protection foil that a worker making a smartphone would use in a given day.

In an interview with The Register at the show in the US West Coast city, Stephanie Hankey, co-founder and executive director of Tactical Tech, said, "Having a visual format and making things interactive and touchable, and [having] different ways that you can explore the issues for yourself, related to stories or narratives that might be interesting, is a really important part of this."

Hankey said the overwhelming common thread she'd heard from previous exhibitions is that people are really concerned about these issues and want to talk about how digital information get used and what they can do about it.

"In London, for example, we had 20,000 people come in three weeks, and they all wanted to have that discussion," she said. "We found that people do actually want to explore how it relates to them and they also want to think about how it changes the environment they live in."

Tactical Tech's work, she said, "raises so many of the questions that we, as a Mozilla and as the makers of Firefox, have been raising for the better part of two decades around privacy and security, and wanting people to ask those questions themselves as a way of sort of taking back a little bit of the control that they have over their digital lives."

Her hope is that the exhibition gives visitors "the tools to hold the makers of these products and services that we all use more accountable for their behavior and their contribution to what is happening online."

Apple insists it's totally not doing that thing it wasn't accused of: We're not handing over Safari URLs to Tencent – just people's IP addresses

Derryck said part of the goal of the exhibition is to not leave people feeling hopeless. "We want people to know that they do have control and they do have agency," she said. "There are things that you can do to improve the experience that you're having online."

Hankey said she believes San Francisco, given its ties to the tech industry, is the place where this conversation should be happening.

"I'm really interested and excited to see what happens when not only users [of the technology around us] right now, but also tech workers, start coming in engaging in the questions. And this is the right moment to do that, we feel, because the industry is having a moment of self reflection, and maybe thinking slightly differently about the decisions they've made and the models we want to pursue."